How Greenhouses Are Warming Afghanistan up to Peace 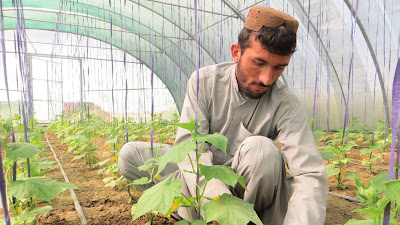 This is what true peace looks like.  Start with the switch over to fruit trees in particular and then start the long trek toward full reforestation.
Afghanistan fully forested would be a paradise and a cool home to tens of millions.  it is not particularly difficult either once you apply fog traps to feed the root of a nearby tree.  That Dutch system allows the tree to be fully rooted and a passive fog trap supplies a water surplus that encourages ground cover as well.   Small as it is though, it is still a capital investment.
What this item tells us though is that the tide has turned and a blossoming agricultural investment environment will quickly revolutionize this country.  After all they are next door to 1.3 billion Indians and 1.1 Billion Chinese for the mere effort of building proper roads and railways and surely they are not idiots.....
How Greenhouses Are Warming Afghanistan up to Peace

Abdul Hadi is a farmer in a village in southern Afghanistan. For more than a decade, he has wrestled with the difficult landscape, producing wheat and other sustainability crops despite failing irrigation systems and harsh winters. “Less than half of the farmers could afford to irrigate their farmland by water pumps,” Hadi told U.S. government workers two years ago, “and the rest of the lands were left barren. Even some of the farmers were obligated to leave their villages.”

The opium capital of the world — Afghanistan produces some 70 percent of the global supply — sees many farmers like Hadi choose to start lucrative poppy fields over difficult legal crops. The trade props up an otherwise nonexistent economy and at times has funded terrorism, according to reports from United Nations investigators. Today, though, farmers are increasingly being equipped with the tools to find profit in the straight and narrow. In fact, humanitarian organization Roots of Peace released a report confirming …

Afghan farmers can annually make around $11,500 for grapes and almonds, $9,000 for walnuts and $6,500 for Golden Delicious apples — compared with only about $4,500 per hectare from growing opium.

Those are valuable hauls, considering that Afghans typically make about $1,889 per year, according to the Average Salary Survey. Since American forces entered Afghanistan post–9/11, development agencies such as the U.S. Agency for International Development have worked to build out irrigation systems and greenhouse technology in a country where three-quarters of its 35 million citizens are involved in the agriculture industry.

Early efforts focused only on “food security crops,” such as wheat or corn. But a tactical shift in recent years has encouraged farmers to grow and sell high-priced crops like pomegranates, grapes, raisins and saffron. Initially, it was challenging to build an export market for those crops, and a lack of dependable transportation made it difficult to move goods. However, demand for Afghan’s new favorite foods is growing, says Gary Kuhn, president of Roots of Peace, which has worked in the region since 2003. “This year, we took 20 traders to Gulfoods in Dubai [the largest food show in the world], and they got deals for $20 million [per year]. For those guys, it was a huge thing. Two years before that, they got deals for $1.5 million.”

Helping build a new export crop economy is just another element of soft power, aimed at waging the war on terror with the promise of employment. It’s still difficult for Afghan farmers to sell at home — more than nine-tenths of their crops are exported to other provinces or out of the country. And good faith built slowly over years of tilling soil together can be destroyed when errant drone strikes and other military activities harm citizens. Trust “certainly can be lost” quickly, acknowledges a USAID agricultural development adviser, who spent years working in the Kandahar region and asked that his name be withheld out of consideration for partner agencies such as the Department of Defense and the Ministry of Counter Narcotics.

During its early years in Afghanistan, USAID encouraged farmers to grow wheat and other “food security crops,” but now the market is shifting toward more lucrative cash crops like apples, grapes and almonds.

And certainly there are geographical challenges that keep some farmers from benefiting. The sandy deserts have poor soil, and water is scarce. The nation relies mostly on “snowmelt, rivers and groundwater,” says the USAID adviser. “Look at it on Google Earth: You see slivers of green, with all this brown, and it makes you wonder how they possibly manage to grow anything.”

With the government of Afghanistan, the U.S. is trying to address some of those challenges. The Kandahar Food Zone Program, a $45.4 million USAID project that expires this August, has rehabilitated 17 irrigation canals, providing water to more than 22,000 households and 27,000 hectares of farmland. An increased emphasis on both low- and high-tunnel greenhouses has reaped benefits too. In Farah province, more than 100,000 greenhouses are expected to generate in excess of $30 million for Afghan farmers by the end of the year, according to a report from the Institute for War and Peace Reporting.

“This is plastic-on-bamboo kind of stuff, it’s really cheap,” says Kuhn, but the simple structures make a huge difference, given the harsh Afghan winters: “You can start your crop early because you can protect the seedlings. And then when it’s warmer, and there’s no frost, you can take them out and your crop is off to the races.”


Assuredly, these are small steps. But if Afghanistan keeps building its economy, perhaps the Forever War could someday end with grapes and almonds rather than drones and rockets.
Posted by arclein at 12:00 AM