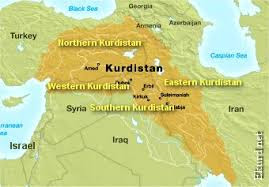 I have always suspected that a democratic Greater Kurdistan provided one of the better roads forward for the Middle East itself. This would attach a significant chunk of both Iran and Turkey and Syria while retaining its core in Iraq.  It would also absorb a number of normally suppressed minorities as well.

It is a rewrite of the original border making operation conducted long ago by the British which set out to ensure built in instability.  A Greater Kurdistan can be stable with a dominant Kurdish population acting as a balance to all the minorities and with an active democratic system allowing steam to be blown off.

Out of that we can sort out a Sunni Syria and a Shiite Iraq as well as a far more stable Turkey.  Better yet it may be possible to shift problems back and forth as well as all this settle down.

The point that should be obvious is that the Kurds are presently an active thorn in every other political group's scheming and has naturally continuously destabilized all calculations unwittingly or not.....  .
.

Salih Muslim Muhammad explains why Kurds are a force to be reckoned with.


The withdrawal of all but a fifth of the 2,000 American troops in Syria, where U.S. armed services have helped train Kurdish fighters in the battle against the now largely depleted Islamic State, has left Kurdish fighters vulnerable to yet another attack — this time from Turkey. At least that’s the normal media narrative.

But in recent days, Syria’s Kurds have released 300 former ISIS militants, having determined that the fighters didn’t have blood on their hands. This sign of leadership is helping Kurds gain credibility outside their own circles. Syria’s Kurds are credited with much of the success against the militants, but Salih Muslim Muhammad, the best-known face of Kurdish opposition in the Syrian civil war, believes he and his colleagues deserve far more credit for the revolution inside Syria. Meanwhile, Kurds are negotiating with the Australian government, asking it to take Australian ISIS fighters back — underscoring how the Kurds weren’t just central to the fight against the ISIS but also to the creation of a post-ISIS future for Syria.

Muslim, the former co-chair of the Democratic Union Party (PYD), the main political party for Kurds in Syria, which he founded in 2003, today serves as head of international relations for the party and as its spokesperson. OZY sat down with him to discuss the American withdrawal from the region and its repercussion for the Kurds. This interview has been condensed and edited for clarity.
America never said it would stay forever. Do the Kurds need U.S. protection?

Salih Muslim Muhammad: That’s right, but they said they wouldn’t leave until three conditions were met: the defeat of ISIS, the expulsion of Iranians from the country and stability in Syria. So far, none of the three has been fulfilled, so their decision looks premature to us. We never asked for protection. Actually, we had been fighting and defending ourselves before Trump [came] to power. During the siege of Kobani, they were helping us with air strikes, but there were no Americans troops on the ground. Withdrawal is not that important because we can defend ourselves. Air defense is all we need.

Neither the so-called Syrian opposition nor the regime has a plan for the country; they don’t follow any democratic principles, they don’t recognize society’s most basic rights.

But you have also opened a dialogue with the regime. Isn’t that a contradiction?

America didn’t organize us. We did it by ourselves. When Washington discovered that Turkey was backing the jihadis, they tried to set up an Arab force, but then they realized that the Kurds were serious and capable of fighting ISIS. That led to a very successful mutual understanding, which was beneficial for all of us. Our talks with the regime prove that our political will was never controlled by Washington.

Has there been any positive outcome so far?

We’re just asking for the decentralization of the country, constitutional reforms and a democratization process, not just for the Kurds but for all Syrians. We haven’t received any answer, because Syria has to agree on every move with Russia and Iran. Our delegation visited Moscow with a road map, which received good feedback from the Russians. Neither the so-called Syrian opposition nor the regime has a plan for the country; they don’t follow any democratic principles, they don’t recognize society’s most basic rights. But we do, and we truly think that’s the only way to achieve peace in Syria. [Muslim is referring to decentralization of Syria, recognition of non-Arab demographics like Kurds, Syriacs and Armenians and a true democratization process.]

But wouldn’t distancing yourselves from the PKK, the Kurdistan Workers’ Party — labeled a terrorist organization by Washington — ease international relations?

We share the PKK’s strategy for the solution of the Kurdish issue and Abdullah Öcalan’s ideas, but the PYD is a Syrian independent political party. Many insist that we should call them terrorists, but we cannot do that after all the people they’ve lost defending cities like Kobani, or many others in Iraq. They’re a Kurdish political party and as such, we cannot call them terrorists.

A safe zone for whom? We want a safe zone for the people. A no-fly zone would be desirable to avoid a Turkish aggression like the one in Afrin, which left the area under the control of jihadi groups. In the meantime, we are being attacked by Turkey and its mercenaries and the Syrian regime.… Both sides have sleeper cells in our territory because they don’t want democracy to take root here.

Do you foresee any plan to reclaim Afrin any time soon?

It all depends on political factors rather than military. Bear in mind that Syria is some kind of a Third World War: Russia, America, Europe, the Gulf countries, Iran.… Everybody is here.

You’ve claimed yours [the Kurds’] has been “Syria’s only revolution.” How do you justify such a strong statement?

We’ve sown the seeds of revolution. That’s our greatest achievement. When you bring people together — Arabs, Kurds, Syriacs, Armenians — and there’s mutual respect, that’s the revolution. We never had any plans to control anyone. We liberated Raqqa and many other territories and told the local people that they were free to rule themselves.

So why were you excluded from peace talks such as those conducted in Geneva, Sochi and Astana?

Since 2013, I’ve been in Geneva many times. One day a journalist asked me whether I had been invited and I said no, but that maybe someone would knock on our door by mistake. We tried, but they never accepted us as there was no place for the Kurds in the plans drawn by the different hegemonic powers in Syria. Besides, whenever there was an attempt to invite us, Turkey would always manage to block it as Ankara doesn’t want Syria to settle.

Wouldn’t it be a much different scenario today if you had fought alongside the Syrian opposition from day one?

The demonstrations in March 2011 that triggered the war in Syria were tackled with brutality by the regime, but we rejected siding with Islamist factions like the Muslim Brotherhood. We wanted a revolution that would lead to a regime change, but without destroying Syria, so we opted for a third way: neither with the regime nor with the opposition. From the beginning, our guess was that the regime would need at least two years to fall, that it wouldn’t be easy, so we decided to organize our people and stand against any attacks. We invited them for talks many times, but they refused to come, and we cannot travel to Turkey. We suffered the regime for decades, and we are also Syrian opposition.
Posted by arclein at 12:00 AM