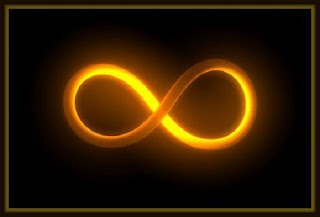 More insight and it all conforms perfectly to my cloud cosmoloogy.  The real addition is that we have many IS-BEs.  I also suspect that such a being will produce multiple aspects of itself in order to populate its universe as well.  That seems to be what is happening.

It then follows that absorption back into hte IS-BE may not be that attractive to some aspects who may then opt to become separate IS-BEs and create their own universe.

Once again, empirical infinity is a very large number.  Yet it is not infinity as we understand mathematical infinity.

A Lesson In Immortality

Immortal Spiritual Beings, which I refer to as "IS-BEs", for the sake of convenience, are the source and creators of illusions. Each one, individually and collectively, in their original, unfettered state of being, are an eternal, all-powerful, all-knowing entity.

IS-BEs create space by imagining a location. The intervening distance between themselves and the imagined location is what we call space. An IS-BE can perceive the space and objects created by other IS-BEs.

IS-BEs are not physical universe entities. They are a source of energy and illusion. IS-BEs are not located in space or time, but can create space, place particles in space, create energy, and shape particles into various forms, cause the motion of forms, and animate forms. Any form that is animated by an IS-BE is called life.

An IS-BE can decide to agree that they are located in space or time, and that they, themselves, are an object, or any other manner of illusion created by themselves or another or other IS-BEs.

A common denominator of IS-BEs seems to be the desire to avoid boredom. A spirit only, without interaction with other IS-BEs, and the unpredictable motion, drama, and unanticipated intentions and illusions being created by other IS-BEs, is easily bored.

Would you get bored?

The entire back time track of IS-BEs is immeasurable, nearly infinite in terms of physical universe time.

There is no measurable "beginning" or "end" for an ISBE.

They simply exist in an everlasting now.

Another common denominator of IS-BEs is that admiration of one's own illusions by others is very desirable. If the desired admiration is not forthcoming, the IS-BE will keep creating the illusion in an attempt to get admiration. One could say that the entire physical universe is made of unadmired illusions.

The origins of this universe began with the creation of individual, illusionary spaces. These were the "home" of the IS-BE. Sometimes a universe is a collaborative creation of illusions by two or more IS-BEs. A proliferation of IS-BEs, and the universes they create, sometimes collide or become commingled or merge to an extent that many IS-BEs shared in the co-creation of a universe.

IS-BEs diminish their ability in order to have a game to play. IS-BEs think that any game is better than no game. They will endure pain, suffering, stupidity, privation, and all manner of unnecessary and undesirable conditions, just to play a game. Pretending that one does not know all, see all and cause all, is a way to create the conditions necessary for playing a game:

Ultimately, playing a game solves the problem of boredom.

In this fashion, all of the space, galaxies, suns, planets, and physical phenomena of this universe,  including life forms, places, and events that have been created by IS-BEs and sustained by mutual agreement that these things exist.

There are as many universes as there are IS-BEs to imagine, build and perceive them, each existing
concurrently within its own continuum. 226 (Footnote) Each universe is created using its own, unique set of rules, as imagined, altered, preserved or destroyed by one or more IS-BEs who created it. Time, energy, objects and space, as defined in terms of the physical universe, may or may not exist in other universes. The Domain exists in such a universe, as well as in the physical universe.

One of the rules of the physical universe is that energy can be created, but not destroyed. So, the universe will keep expanding as long as IS-BEs keep adding more new energy into it. It is nearly infinite. It is like an automobile assembly line that never stops running and none of the cars are ever destroyed.

Every IS-BE is basically good. Therefore, an IS-BE does not enjoy doing things to other IS-BEs which they themselves do not want to experience. For an IS-BE there is no inherent standard for what is good or bad, right or wrong, ugly or beautiful. These ideas are all based on the opinion of each individual IS-BE.

The closest concept that human beings have to describe an IS-BE is as a god: all-knowing, all-powerful, infinite. So, how does a god stop being a god? They  pretend NOT to know. How can you play a game of "hide and seek" if you always know where the other person is hiding?

You pretend NOT to know where the other players are hiding, so you can go off to "seek" them. This is how games are created. You have forgotten that you are just "pretending". In so doing, IS-BEs become entrapped and enslaved inside a maze of their own devising.

On Earth, the propaganda taught and agreed upon is that the gods are responsible, and that human beings are not responsible. You are taught that only a god can create universes. So, the responsibility for every action is assigned to another IS-BE or god. Never oneself.

No human being ever assumes personal responsibility for the fact that they, themselves -- individually and collectively -- are gods. This fact alone is the source of entrapment for every IS-BE
Posted by arclein at 12:00 AM