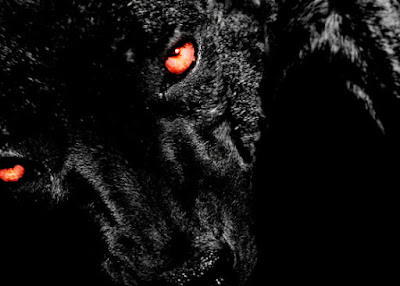 Once again we have the Giant sloth and this time observed by a serious expert in morphology.  While other observers at best observe a not dog but dog like, this is more refined.  Of course he scampered.
Again the creature failed to give chase.  I now do not consider this creature to be much of a runner, except sufficient to get to the nearest tree.  I have several reports in which this is what happens.  Even a bear will try to see you first and then wander off.
All those were accidental encounters as well.  When a hidden approach is sensed the creature is typically not seen at all.
In the event he described it well in terms of naming and most certainly this creature has imspired folklore..


“I actually had a strange "demon dog" encounter. My hellhound/demon dog/chupacabra/hyena sighting also occurred in broad daylight at very close range, as it was eating a large goose down in the creek-bed and I must have startled it since I came right up on it unexpectedly. I am a biologist and I have a background in several specialized biological fields, have conducted tons of field research, and have been in forests and swamps ever since learning how to walk. This thing was massive and canine but sort-of had hints of feline or hyena-like traits are far as it's overall morphology and structure, it also moved oddly for a dog. As I said, I was almost right on top of it by the time we saw each other, and I slowly backed away and once I had enough distance between us, I promptly fled. This encounter was very short, so I didn't have a lot of time to study every feature of its body, and I always chalked it up to simply being a massive and extremely bizarre or deformed dog, but I can't really justified that line of thinking, as this creature was unlike any canine I have ever seen or that appears in the fossil record of North America. I live in Pennsylvania and we're not exactly known for having "exotic" wildlife and it's humbling to admit that I, as a biologist, have nothing but assumptions about what it could be.. I couldn't even tell you what taxonomic family it belongs to. It was lanky for a dog and did have rather long hind legs. I wouldn't characterize it as wallaby or kangaroo -like - it seemed to have high shoulders and moved more like a big-cat...more "stealthily".” - J. Gona
Posted by arclein at 12:00 AM