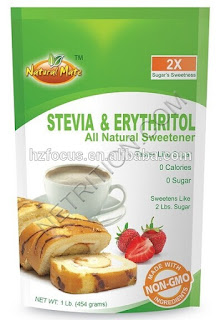 I discovered this by reading it on the label of Starbucks Stevia product.  From this it is certainly a solution to beverage sweetening.  That it is also used with stevia allows the sweetness to be topped up to our expectations.

Stevia is also becoming mainstream and using a combination allows any after taste to be dealt with.  For cooked foods, i would much prefer to use glucose or even honey along with added stevia.

Otherwise we certainly need to replace sugar as much as possible and this certainly does it with coffee.  We are actually watching the demise of sugar or at least its major demotion.

The low-calorie sweetener erythritol may seem too good to be true.
It's natural, doesn't cause side effects and tastes almost exactly like sugar — without the calories.
Basically, it has all the things that are good about regular sugar, without any of the negatives, although some media outlets question its benefits.

This evidence-based article reviews the benefits and possible side effects of erythritol.


Erythritol belongs to a class of compounds called sugar alcohols.
Many different sugar alcohols are used by food producers. These include xylitol, sorbitol and maltitol.
Most of them function as low-calorie sweeteners in sugar-free or low-sugar products.
Most sugar alcohols are found in small amounts in nature, especially in fruits and vegetables.
The way these molecules are structured gives them the ability to stimulate the sweet taste receptors on your tongue.
Erythritol appears to be quite different from the other sugar alcohols.
To begin with, it contains much fewer calories:
With only 6% of the calories of sugar, it still contains 70% of the sweetness.
In large-scale production, erythritol is created when a type of yeast ferments glucose from corn or wheat starch. The final product looks something like this:

Summary Erythritol is a sugar alcohol used as a low-calorie sweetener. It provides only about 6% of the calories found in an equal amount of sugar.

Multiple studies on its toxicity and effects on metabolism have been performed in animals.

Despite long-term feeding of high amounts of erythritol, no serious side effects have been detected (1, 2).

There is one major caveat to most sugar alcohols — they can cause digestive issues.

Due to their unique chemical structure, your body can’t digest them, and they pass unchanged through most of your digestive system, or until they reach the colon.

In the colon, they are fermented by the resident bacteria, which produce gas as a side product.

Consequently, eating high amounts of sugar alcohols may cause bloating and digestive upset. In fact, they belong to a category of fiber known as FODMAPs.

However, erythritol is different than the other sugar alcohols. Most of it gets absorbed into the bloodstream before it reaches the colon (3).

It circulates in the blood for a while, until it is eventually excreted unchanged in the urine. About 90% of erythritol is excreted this way (4).

Although erythritol doesn’t have any serious side effects, eating high amounts may cause digestive upset, as explained in the next chapter.


Summary Most of the erythritol you eat is absorbed into the bloodstream and excreted in urine. It seems to have an excellent safety profile.


About 90% of the erythritol you eat is absorbed into the bloodstream. The remaining 10% travels undigested down to the colon.

Unlike most sugar alcohols, it seems to be resistant to fermentation by colon bacteria (4).
Feeding studies providing up to 0.45 grams per pound (1 gram per kg) of body weight show that it is very well tolerated (5, 6).

However, one study showed that 50 grams of erythritol in a single dose increased nausea and stomach rumbling (7).

Unless you're eating massive amounts of it at a time, it's unlikely to cause a stomach upset. However, erythritol sensitivity may vary between people.


Summary About 10% of ingested erythritol is not absorbed into the blood and travels down to the colon. For this reason, a very high intake of erythritol may cause some digestive side effects.

Does Not Spike Blood Sugar or Insulin


Humans don't have the enzymes needed to break down erythritol.

It’s absorbed into the bloodstream and then excreted unchanged in the urine.

When healthy people are given erythritol, there is no change in blood sugar or insulin levels. There is also no effect on cholesterol, triglycerides or other biomarkers (8).

For those who are overweight or have diabetes or other issues related to the metabolic syndrome, erythritol appears to be an excellent alternative to sugar.


Summary Erythritol does not raise blood sugar levels. This makes it an excellent sugar replacement for people with diabetes.

May Reduce the Risk of Heart Disease

Another study in 24 adults with type 2 diabetes found that taking 36 grams of erythritol every day for a month improved the function of their blood vessels, potentially reducing their risk of heart disease (10).

However, erythritol is not without controversies. One study linked high blood erythritol levels to fat gain in young adults (11).

More studies are needed before any claims can be made about the health relevance of these findings.


Summary Erythritol acts as an antioxidant and may improve blood vessel function in people with type 2 diabetes. These benefits may potentially reduce the risk of heart disease, but more studies are needed.


Overall, erythritol appears to be an excellent sweetener.
Health-conscious people might choose to sweeten their food with stevia or honey. However, honey contains calories and fructose, and many people don't appreciate the aftertaste of stevia.
Erythritol appears to offer the best of both worlds.
Posted by arclein at 12:00 AM