We've Been to Star Wars: Galaxy's Edge and Life Will Never Be the Same 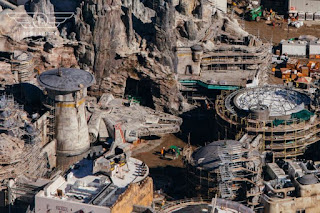 This represents a massive revitalization of the original Disneyland site itself.    We can expect a similar program applied to other operations as well.

In its own way it is all astonishing. That this will continue is welcome and to see creative engineering on this scale is awesome.

Now consider that i now understand how it can be possible to actually make a gravity float car as was shown us in StarWars in 1976.  Where did they get the original concept from?  What have we not been told..

We've Been to Star Wars: Galaxy's Edge and Life Will Never Be the Same

Soon, you and your family will be able to visit Star Wars Galaxy's Edge.

For Star Wars fans, two things have always been true. It’s a world we all dream of visiting but will never actually be able to. Star Wars is a movie, of course. Fiction. The sets and places only exist in far off studios for a few months at a time, or as ones and zeroes on the servers of visual effects companies. None of it exists. It isn’t real. That is, until now.

Last week, io9 was among a select group of press to visit Star Wars: Galaxy’s Edge at Disneyland in Anaheim, California. The largest land expansion in Disney history is still months away from opening (summer 2019 in Anaheim and fall 2019 in Orlando is all the company is officially saying for the moment) and is still an active construction site, with upwards of 1,000 people working on it 24 hours a day, seven days a week at its peak. Everything is muddy. There’s scaffolding everywhere. You have to avoid large pipes and walk on thin two by fours across huge holes. This is not remotely close to what fans will experience when the doors open later this year and yet, it’s already one of the most exhilarating places I’ve ever been.

You get to actually stand next to the Millennium Falcon, for crying out loud!

One of the centerpieces of Galaxy’s Edge is a full size, 1:1 scale Millennium Falcon. It’s over 100 feet long, probably 25 feet high and is covered with all the little tubes and pipes you see in the films. Everything. There it is. Right in front of you. The fastest hunk of junk in the galaxy is real and words simply can’t do justice to describe what it’s like to stand beneath it, especially for a massive Star Wars fan like myself. It’s as if your wildest fantasies have finally been brought to life.

The Falcon is there to mark one of the two main attractions fans will find in Galaxy’s Edge. First is Millennium Falcon: Smugglers Run, which allows guests to fly the Millennium Falcon, and second is Star Wars: Rise of the Resistance, which is a multi-faceted experience that has guests becoming part of the Resistance, being captured by the First Order, and then escaping a Star Destroyer in one of the biggest, most elaborate, and longest rides in the history of Disney.

Neither ride was up and running when I visited last week, but we walked through each and learned how they will work, their stories, and got a hint at how spectacular each aims to be. Before I get into that, though, it’s important to explain that Galaxy’s Edge is unlike any other part of the famous theme park. Places like Fantasyland or Tomorrowland are just areas of the park that have similar themes. Galaxy’s Edge is designed to be more than that. It’s designed to actually be another world.

When you walk into Galaxy’s Edge, you are walking out of Disneyland and into the Black Spire Outpost on the remote planet of Batuu, a former hotspot of activity that time has long forgotten thanks to hyperspace routes. Now it’s a relatively quiet planet (in theory; Disney crowds might have something to say about that). A place where smugglers and outlaws go to quickly make a few extra credits. A place where the Resistance has embedded themselves to hide out and the First Order has just arrived in pursuit, each faction inhabiting one edge of the 14-acre space.

At Black Spire Outpost you can’t buy a Black Spire Outpost t-shirt. None of the merchandise overtly says “Disneyland” or “Star Wars” on it. There’s a chance you might not even be able to get an Earth drink, like Coke, there (or, if you can, it will somehow be twisted to fit the theme; that’s still being decided on). That’s because the creators don’t want you to feel like you’re at Disneyland anymore, but at Black Spire Outpost on Batuu. The goal is for everything there to make you feel like it’s a real place.

Everything is part of the story. Every cast member not only chooses their own outfits but develops their own characters with their own opinions and allegiances in this world. Every piece of food has a specific reason for being the way it is, whether that means coming from a specific animal, or prepared in a decidedly Star Wars way (more on that soon). Disney actually figured out what Star Wars’ most famous drink, Blue Milk, would taste like and will serve it here. There’s a full-on cantina with music being spun by DJ R-3X, the pilot of the original Star Tours (and once again voiced by Paul Reubens). Even the writing on the walls, literally, was created not just to give the land historical context, but much of it is part of a larger interactive game you can participate in. Guests can download the Play Disney Parks app (which is already available), and, eventually, use a Star Wars function that opens Black Spire to a ton of new possibilities. (More on that from us soon as well.)
Posted by arclein at 12:00 AM