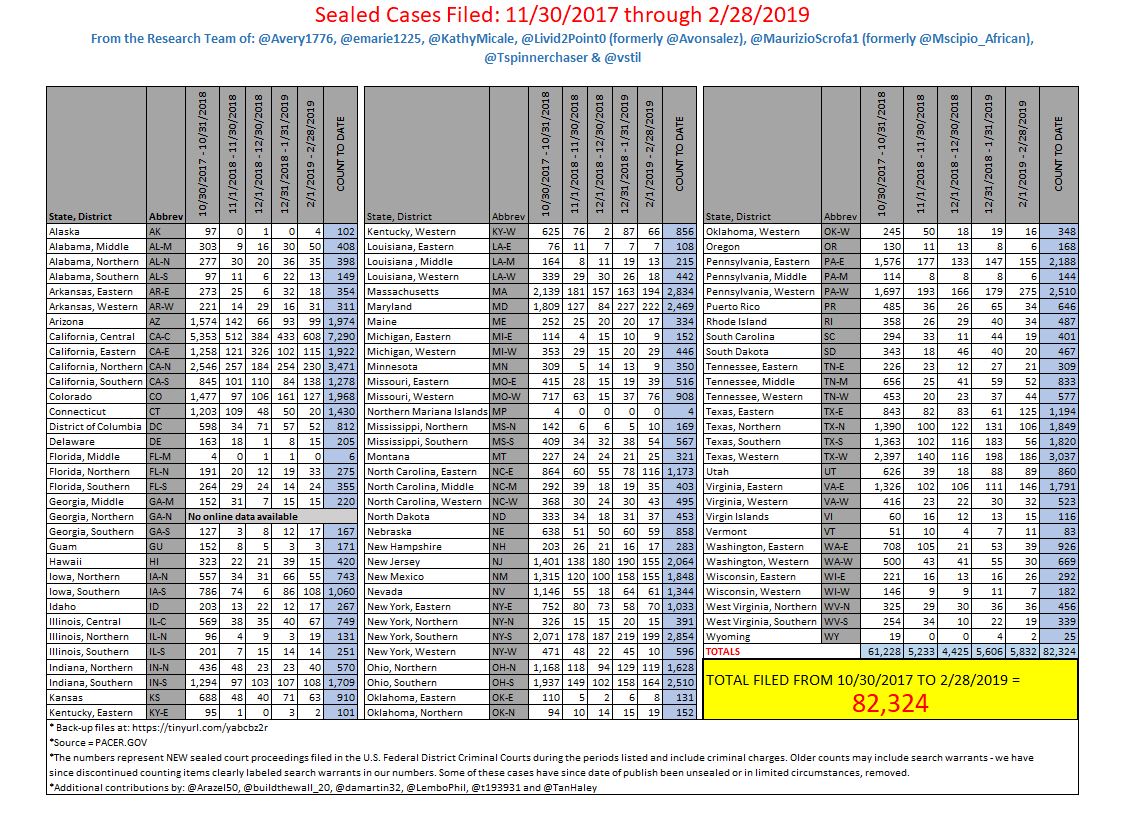 We now have 82,000 sealed indictments out there.  The acquisition rate is slightly over 5100 per month.  Understand the line below in which blanket surveillance in happening.  All this is possible because we are in a state of WAR and WAR powers are been used and MIL INTEL is clearlyin charge.

WE have been watching the public house cleaning of the DOJ and the FBI.  Now we understand that all the so called letter agencies have been given the same treatment while we have been sleeping - TRUST SESSIONS.

500 new prosecutors translates into 10,000 cases now under full application of process.  Presume that the in place manpower matches that at least.  In short 10,000 to 20,000 are now actively proceeding with an ample backload to keep them all busy for several years.  No deals either.

After that or concurrently, the State justice systems will also surely be cleaned up.

If 'evidence' exists(ed), under 'broad' scope #1, would Mueller have the auth to pursue?

The Special Counsel is authorized to conduct the investigation confinned by then-FBI Director James 8. Corney in testimony before the House Permanent Select Committee on Intelligence on March 20, 2017, including:

(i) any links and/or coordination between the Russian government and individuals associated with the campaign of President Donald Trump; and
(ii) any matters that arose or may arise directly from the investigation; and
(iii) any other matters within the scope of 28 C.F.R. § 600.4(a).

Because no evidence exists(ed) and/or was found by SC/Mueller, was scope #2 enacted in an attempt to go outside of the 'intended engagement'?

Why is scope #2 classified only to AG/DAG and a select few others (read at terminal only)?

If 'evidence' exists(ed), why did R+D members of the Senate conclude NO DIRECT EVIDENCE EXISTS …………..?

If 'evidence' exists(ed), as per your statement released today, again, why did the SENATE (R's + D's) JUST CONCLUDE NO EVIDENCE EXISTS?

When will Americans wake up to the [D] party con that is continually pushed without facts, without support, and supported and further pushed by the media arm of the [D] party [FAKE NEWS MEDIA]?

Reading the comments on these Tweets further demonstrates the seriousness of media brainwashing in our Country whereby statements are considered fact w/o the need to provide proof.

Group-Think.
Control of the Narrative.

If enough people state the same thing w/o providing evidence and/or support does it become FACTUAL to those caught in the loop?

Those still asleep buying the 'narrow' scope 'new narrative' shift.
If the scope memo was never unclassified (v2) how do D's make this statement?

(sorry, no heat map this month - a couple of our soldiers are down with medical ailments)

Sometimes reading between the lines provides…

"Huber says every one of the prosecutors is already handling about twenty cases."

"They range from domestic terrorism to court-authorized wiretaps of criminal organizations to child pedophiles and those who would exploit our children. Criminal aliens. Big fraud schemes."


Ask yourself a very simple, logical, question.
What is a FISA warrant/application?
Is it a highly confidential [safeguarded] product of the UNITED STATES GOV?
If a product of the US GOV _ how did UK/AUS know what was listed inside of the package?

If the US GOV requests UK/AUS [+2] to spy [+ campaign insertion] on an AMERICAN PRESIDENTIAL PRE_NOMINEE + POTUS ELECT, is there a CHAIN OF COMMAND to APPROVE such AUTH?

Paper trail of the CHAIN OF COMMAND & umbrella spy metadata?
If not tasked & targeted under FVEY - what legal authority existed to engage the targeting?
Think Nunes' statement "not through normal collection, gathering, and reporting/oversight re: (FVEY)."

Did the dossier provide the 'bulk data' anchor for the spy campaign?
What entity paid for the 'research' dossier?
Opposition candidate?

What US Ally completed the collection of false data?
Why was it important to use sources within the UK vs. US?
How do you circumvent US LAW?
What other 'anchors' were provided to FISC in order to gain the warrant? [DECLAS will show].
Was the 'other' data (collection/process) worse than the dossier?
Why didn't FISC require 'in room' presentations of the data prior to 'sign off'?
Who signed apps 1-4?

Who traveled to UK/AUS post election of POTUS?
Why were SECURITY PRIV removed from select 'formerly active' individuals?

How do you repair a bridge without closing it down?

Why have there been no arrests?
Why have 'specific' dates been mentioned only to see no action?

Do we let our enemies walk through the front door?
Define 'plausible deniability'.

Why was it important to FIRST clean house within the FBI & DOJ (public info)?

When does MIL INTEL have jurisdiction?
What vested powers does POTUS have re: MIL INTEL vs. ABC agencies re: matters of NAT SEC (HOMELAND)?

Transfer from AG1 to AG2?
Why might that be important?

How do you avoid 'politically motivated/attack - obstruction - attempt to block/obstruct Mueller'?

When are optics not important?
Think Whitaker.

Define 'stage set'.
Who recently walked 'on stage' to take command?
What 'stage' experience did this person have?
Think Bill Clinton impeachment.

Has the 'stage' been cleaned & cleared for the next performance?
If the 'stage' is clean, can the performance begin?
How might 'transparency' [DECLAS] fit into the dialogue?
Define 'thesis' statement.
What benefit(s) does this provide BARR?

"This is not simply another four-year election. This is a crossroads in the history of our civilization that will determine whether or not we, the people, reclaim control over our government." - POTUS