I personally avoid process cheese generally, but only because there is so much available in terms of excellent cheeses and not because i actually dislike it.  My main go to cheese has always been cheddar.

However, there is one processed cheese product that can be made into some thing surprising.  That is Velveeta.  We may even have developed this when i was a kid on the farm though i do think that there was a Kraft recipe to start with that possibly included other things.

What you do is saute some finely chopped onions in a skillet with a bit of butter.  Once golden you add a cup of water.  When simmering you add chopped up Velveeta to produce a smooth cheese sauce. About two - three inches of a large package.  STOP there!  Nothing else improves this.

You now have your go to spaghetti or pasta sauce that always beats out every other type.

This is a good item on history and the like.

France famously produces more than 300 different kinds of cheese—perhaps more than 1,000 depending on how you count and whom you ask. However, none are called fromage Française, and very few of them would be good on a burger.

American cheese, on the other hand, is an overly broad moniker for a very specific item—a floppy orange square of soft, slightly tangy, slightly sweet cheese that bends and folds at room temperature, and melts into a glossy, gooey puddle of unctuous dairy.

An apricot-hued emblem of early 20th-century food manufacturing innovation (see also: cereal, breakfast; coffee, instant; bread, sliced), American cheese in general was originally seen as a convenient and nutritious household staple. As tastes have changed, the humble slice has been maligned as an example of the blandness of the American palate, as well as evidence that our food is nothing more than chemical-filled simulacra.

Still, nothing melts quite like that orange deli staple, whether draped over a burger patty or layered between two slices of white bread and toasted to perfection. American cheese has many defenders,


$2.77 billion: Retail sales value of American cheese in 2018
40%: Share of American households that bought Kraft Singles in 2018
1.6%: Decline in processed cheese sales in 2018
>30: Time in seconds that cheese food must be heated to a temperature of 150°F (65.5°C) or above to be considered “pasteurized process cheese food” by the FDA
No less than 47%: Amount of cheese a product must contain to bear the label “Pasteurized Process Cheese,” according to the FDA
349,000: Metric tons of cheese the US exported in 2018
805 million: Pounds of surplus cheese in cold storage in the US as of January 2019

64: Slices of American cheese Homer Simpson once ate in a single night

The history of American cheese

American cheese as we know it today exists because of Canadian and Swiss cheesemaking ingenuity. In 1916, James Kraft, a Canadian cheesemaker, patented a process for pasteurizing cheese in a way that allowed it to be shipped and stored for longer periods of time than ever before. It just so happened that the US military was in the market for stable food products that would still taste pretty good after being shipped to troops overseas. After World War I, American soldiers brought home an acquired taste for the stuff, and it became a grocery staple.

Emil Frey, the Swiss-born inventor of Velveeta, honed in on another problem that processed cheese could solve—waste. While working for the Monroe Cheese Factory in New York state, he developed a way to melt and combine scraps from imperfect wheels into a new cheese using whey as an emulsifying agent. Et voila, Velveeta. Kraft quickly purchased the brand. As the American appetite for uniform, pre-packaged food grew, the company rolled out innovation after innovation: Pre-sliced cheese in 1950 was followed by individually wrapped Kraft Singles in 1965 and Velveeta Shells and Cheese in 1978.


Though the company is now synonymous with it, Kraft is not the only producer of American cheese. Land O’Lakes, Boars Head, Cabot, and many other regional cheese companies also make a processed cheese product from some combination of cheese, milk, whey, emulsifying salts, and other magical ingredients that stabilize and color the final product.

It's all in the emulsion
Melted cheese, at its gooiest, creamiest best is an emulsion—two liquids that normally don’t bind, held in suspension. Mayonnaise, vinaigrette, and hollandaise sauce are all emulsions you’ve probably enjoyed. The reason that queso made with Kraft Singles or Velveeta is so glossy and smooth is that emulsifying salts, specifically sodium citrate, hold the water and fat in an emulsion.

While sodium citrate might sound like something you need access to a lab to handle, it’s an inexpensive, common food additive—which gives club soda its tang. Modernist Cuisine obsessives Nathan Myhrvold and Maxime Bilet figured out how to turn any cheese into something gooey and meltable at home using sodium citrate.


If you don’t want to get out the chemistry set, Serious Eats developed an American cheese recipe that harnesses the power of gelatin and evaporated milk to create stretch and gloss. Mmmmm.
Reuters/Arnd Wiegmann

Talking point for your next pizza party: The US has a serious cheese surplus. Most of it is not American cheese—yet. It’s largely cheddar, which one day could be processed into American cheese. While lower than its recent peak of close to 840 million pounds in June of 2018, there were 805 million pounds of surplus cheese in cold storage as of January 2019—four pounds for every American. Low grain prices have led to surpluses of meat and cheese, which begs the question: Why isn’t the US throwing the world’s biggest taco party right now?

Have a friend who would enjoy our Obsession with American cheese?

“[I]f I had to pick one cheese to stock in my burger joint, you’re damn right it’s gonna be American. No other cheese in the world can touch its meltability or goo factor.”

Queue up for queso

For proof of the unique culinary advantage of processed cheese, look no further than queso, the beloved Tex-Mex cheese dip. Even more than on a burger or in a grilled cheese sandwich, texture is everything, and that glossy, gooey stretch when you dip a tortilla into a bowl of warm queso can really only come from one source, as Chipotle learned the hard way.
million-dollar question

What's in a name?

The FDA gets very, very specific about what can be called cheese, legally. In an epic defense of American cheese on Serious Eats, J. Kenji López-Alt breaks down the labels and what they mean. In this context, Pasteurized Process Cheese is the good stuff—these are deli slices, Land O’Lakes, Boars Head, Kraft Deli Deluxe. They’re mostly cheese, with some amount of whey, milk, emulsifying salts, and other ingredients for color and texture.


Pasteurized Process American Slices are generally what people have in mind when they say that American cheese is made out of vegetable oil, not actual cheese. Bottom line: If the word “cheese” is not somewhere on the label, chances are this is what you’re dealing with. Unlike Pasteurized Process Cheese, or even Singles, they don’t melt all that well or taste all that good, even on a burger or in queso. If you’re looking for something to avoid, this is it.
fun fact!

When James Kraft gave the world American cheese, most home cooks were far more worried about getting enough calories—and about food safety—than we are today. The assurance that Kraft’s product was pasteurized, factory fresh, and not microbe-laden was a big selling point. All that nutritious cheese, milk, and whey was another, as in the video above.

By mid-century, Velveeta was rebranding itself as a smart choice for dieters, advertising serving suggestions like a dessert plate of sliced Velveeta and fresh fruit. (It’s true that whey, one of the binders that helps Velveeta achieve its unique texture, is an ingredient that wouldn’t be out of place in a superfood green smoothie in 2019.)


In the past decade though, consumers have been drawn to food that bills itself as fresh, unprocessed, and organic. In 2015, Kraft withdrew Singles from the “Kids Eat Right” program, in which specific foods were labeled to indicate they were healthy choices for growing bodies, after consumers and dieticians complained that any program touting the health benefits of Kraft Singles was flawed.
charted

The other American cheese

Yes, American cheese is a stretchy orange slice or block perfect to melt onto a burger. It’s also an accurate way of describing the many delicious cheeses that are made around the United States. In the past 20 years, there has been an explosion of new artisan cheeses made by cheesemakers, many of whom are also milking the goats, sheep, and cows providing the milk on a daily basis.

More recently, sales of artisan cheese have risen dramatically while Kraft has remained flat in a market where consumers are more compelled by freshness and craft. The number of cheese factories in the US grew by 40% between 2000 and 2017, and most of the growth came from small, artisanal producers making cheese ready to be displayed on a rough-hewn piece of slate next to a pile of prosciutto, some cornichons, and a dab of honey.

While the market for artisanal American cheeses is growing, along with the number of cheesemakers, a product like Bayley Hazen Blue or Pleasant Ridge Reserve is still reaching a much smaller portion of the market than Kraft Singles or Velveeta. The collective appetite for American-made, Italian-style cheeses is even greater. 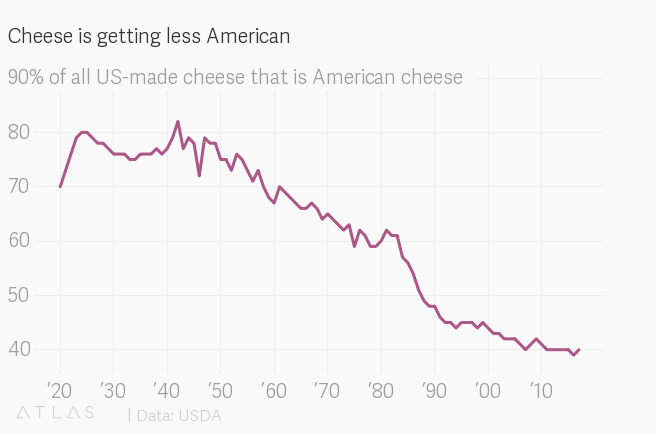 Italian-style cheeses, specifically mozzarella, have skyrocketed as a proportion of the cheese that America produces. As a gooey pizza-topper, it is beloved for some of the same reasons as orange American cheese—it’s mild, inexpensive, and best when melted. 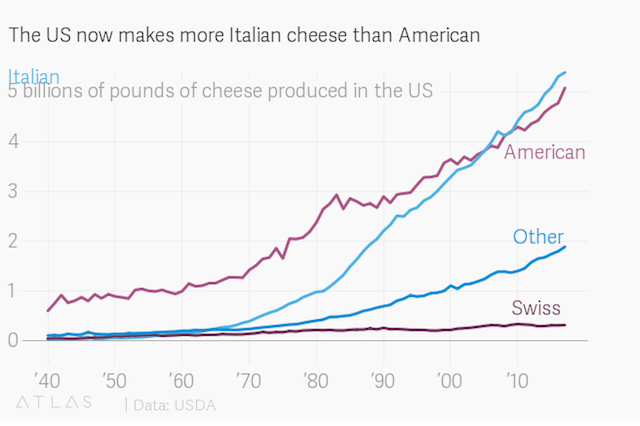