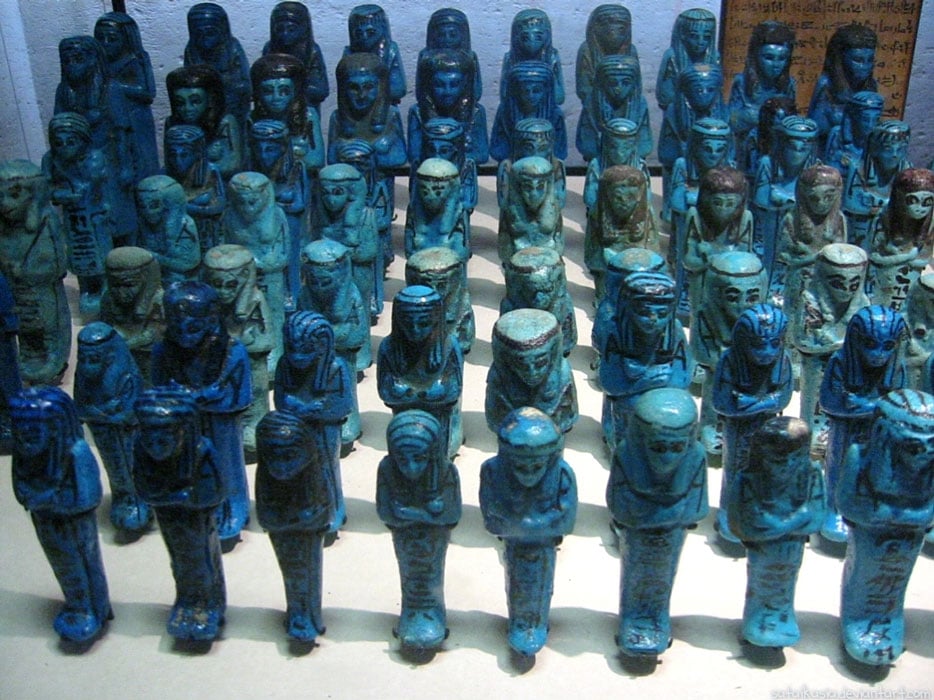 All beginnings  now but this could all be important if it is possible to absorb a wide portion of the solar spectrum and then convert it to infra red without significant loss.  The infra red radiation can then be turned directly into electrical energy which is usable.

Blue matters as we can actually see it.  It is the apparent background radiation associated with Dark Matter which makes it invisible unless you are sitting in a deep cave or mine and all lighting is turned out.   Our sky is blue because all the other wavelengths that we can see are absorbed.

Egyptian blue was a brilliant blue color first created in ancient Egypt over 4000 years ago. Now, scientists have found it to hold unique qualities that can “reduce building energy consumption and boost solar energy output.”

Scientists at the Lawrence Berkeley National Laboratory in California studying the ancient Egyptian shade of blue announced that it might not only boost “building energy efficiency in sunny climates by keeping walls and rooftops cool,” but that it can also “increase the output of certain types of solar cell, through strong infra-red emissions” according to a report in PV-Magazine.

What Are the Properties of Egyptian Blue?

Derived from calcium copper silicate, it was already known that photons absorbed by ‘Egyptian blue’ can be emitted in the near-infrared range, however, scientists “measuring the temperature of surfaces coated in the color,” demonstrated that it was “able to emit as many photons as it absorbs.” This, Berkeley researchers believe , might lead to “applications in building integrated PV, such as solar windows tinted with the blue, and transparent cells tuned to absorb the near infrared part of the light
US Energy Secretary Rick Perry had a go at making a solar cell using perovskite ink on a visit to the NREL in Colorado. ( Dennis Schroeder / NREL )

The findings presented in the scientists’ paper, which was published in the Journal of Applied Physics , effectively offers another color to eco-architects looking specifically for cooling properties, aiming to increase building’s efficiencies by reducing their energy expenditure.

Ancient Egyptian society was the first to adopt a word for the color blue because they were the first culture to produce blue dyes. Egyptian blue represented the Nile, the sky, the universe, creation and fertility; but the only natural source of the color was the rare mineral lapis lazuli which was mined in what is now Afghanistan, making it exceptionally valuable. The color was used on the tombs of Mereruka from the Old Kingdom (2600-2100 BC) and it is almost exactly the same shade of blue that was found in a coffin dating from the Greco-Roman period (330 BC- 400 AD), confirming the Egyptians had standardized a production system which had been passed down over two thousand years.

Left: Egyptian blue, also known as calcium copper silicate, or CaCuSi 4O10, or cuprorivaite, is considered to be the first synthetic pigment ever developed. ( Public Domain ) Right: Pyxis colored "Egyptian blue" produced between 750-700 BC, currently on display at the Altes Museum in Berlin.

A news article is greatly composed with data presented in the press releases and published papers of the universities and scientific institutions who make breakthrough discoveries and observations. And of course you must hold a degree of trust in the integrity of your reporter, in this case me. Thus, it is my responsibility to furbish you with as many facts and figures pertaining to any allegedly “new” discovery as I can possibly cram into an article.

I could leave you here in awe at the scientific prowess of the Lawrence Berkeley National Laboratory in California and their “new” discoveries concerning Egyptian blue, but that would be doing a great disservice to chemist Mas Subramanian of Oregon State University (OSU) who last year announced in a press release that he had discovered “YInMn blue.” He even went so far as to say that his new blue color “could be used in the blue roofing movement;” exactly the application that it is being announced today by Berkley Labs.

YInMn blue was named after the elements “Yttrium, Indium and Manganese, which Mas Subramanian used during “experimentation with materials for electronics applications.” According to the OSU press release, the beautiful blue was discovered “by accident back in 2009” and was last year “being prepared for the marketplace.” Subramanian told reporters, “It was serendipity, actually; a happy, accidental discovery.” 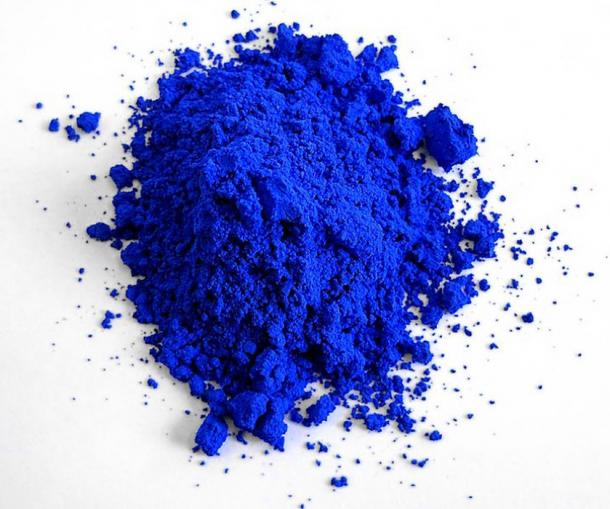 Photograph of “ YInMn Blue” as synthesized in 2017 by the (OSU) chemist Mas Subramanian and his team in the laboratory. (Mas Subramanian/ CC BY SA 4.0 )

According to Subramanian in an Oregon State University paper about the discovery of YInMn blue, “it is stronger and more durable” because it is formed “by a unique crystal structure that allows the manganese ions to absorb red and green wavelengths of light.” This deep, vibrant blue is in fact so durable that “the new pigments versatility has a variety of commercial applications in paints, for example, to keep buildings cool by reflecting infrared light.”

While we celebrate Lawrence Berkeley National Laboratory’s announcement of the ‘commercialization’ of Egyptian blue , let us hold a thought for chemist Mas Subramanian who first discovered its “electro” properties, and we should have more than a thought for the 4000 year old Egyptians who created the color and associated it with great spiritual powers relating to the creation of the universe.

Top Image: Egyptian blue shabti figures on display in the Egyptian exhibit at the Louvre in France in 2006. Source: sataikasia/ Deviant Art

By Ashley Cowie
Posted by arclein at 12:00 AM