Private health insurance exists in Europe and Canada. Here’s how it works. 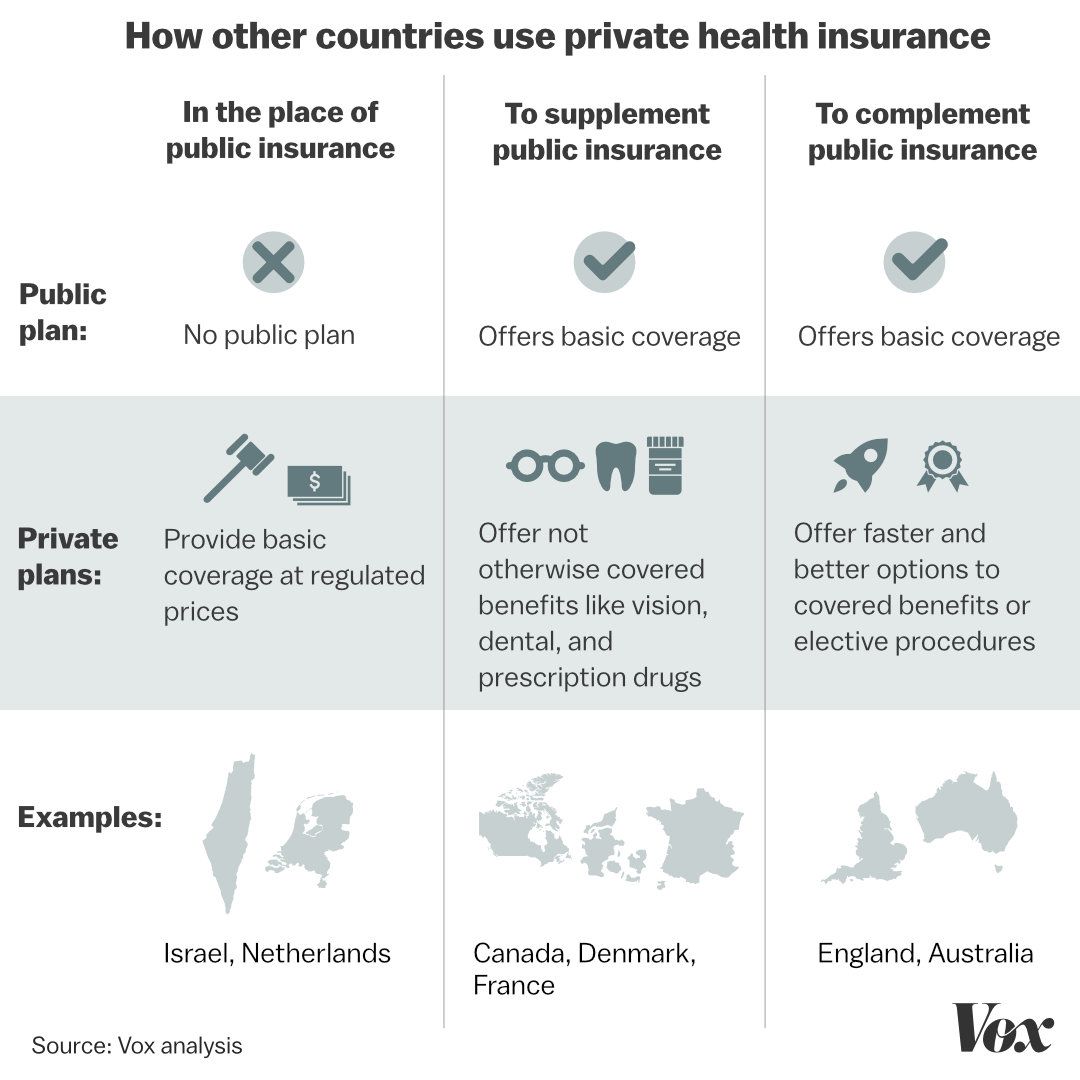 .
This is the debate that the USA has never had, not least because the industry wants it that way.  After all, with politicians debating multiple issues, any solution will fall through the cracks.  That the problem has been solved elsewhere goes unmentioned.

Our Canadian system ensures a doctor sees you and likely bounces you up the service chain.  That is actually good enough as at that point you tend to have enough knowledge to choose various options.  Wait times are dependent on the doctor and even there new protocols can help that along.  My point is that a knowledgeable consumer can navigate expeditiously without spending money.

The problem arises with optional repairs and that is true anywhere.  This is the one place that money can help.  Paying cash allowed a friend to have a detached retina operation the next day.  The insurance industry could sell the same service for a fee.  After all the doctors collect weeks later normally from the insurers.

The huge benefit that doctors experienced with a universal service is that they no longer had to provide credit to their patients.  They even got real holidays and worked civilized hours.  That means they have ample slots to provide service for cash payers.  That us why we have clinics now instead of fully loaded private practices as we used to expect.

Private health insurance exists in Europe and Canada. Here’s how it works.

The debate over eliminating health insurance is actually offering a false choice.

Presidential hopefuls in the Democratic primary have in recent weeks found themselves facing a new litmus test: Do they want to eliminate private health insurance?

An international perspective is helpful here. When you look out at the rest of the world — at the dozens of countries that run universal health care systems — you find that every universal health plan relies, in some form or another, on private insurance.


“Basically, every single country with universal coverage also has private insurance,” says Gerard Anderson, a professor at Johns Hopkins University who studies international health systems. “I don’t think there is a model in the world that allows you to go without it.”

Other developed countries routinely use private insurance to fill in the gaps of their public plans or to offer patients a way to get to see a doctor a bit faster. Some countries, like Australia, even take aggressive steps like offering tax benefits to encourage citizens to enroll in private coverage alongside their public plan.

“Each country has figured out its own role for private insurance,” says Robin Osborn, a vice president at the nonprofit Commonwealth Fund who studies international health systems. “In almost every system, it tends to not be controversial because the commitment to basic universal coverage is there.”

How other countries use private health insurance, it turns out, can actually tell you a lot about what countries value in a health care system — and how they think access to care ought to be organized.

The three ways other countries use private health insurance

When you look out at our peer countries, you essentially see them using private health coverage in three distinctive ways.

First, there are some countries that require all citizens to enroll in health coverage run by private insurers. These insurers typically compete in a market with strict rules about what they must cover and how much different medical services cost.

In each case, the insurers are required to cover the same set of benefits and cannot charge higher premiums for the sick. But they can compete along other dimensions.

“They compete on what other benefits do they offer, and the price of the premium too,” Osborn says. “Generally, though, people don’t switch insurance very much. They tend to stick with their plans for a long time, even though they have the option to switch each year.”

The benefit these systems offer is primarily about choice: In Israel and the Netherlands, patients have multiple options for where they want to seek health coverage.

Second, there are some countries where private insurance supplements public insurance. It’s quite common for Canadians and Europeans to purchase supplemental insurance that covers things that the public plan won’t.

Sometimes this takes the form of supplemental insurance to pay for non-covered benefits. In Canada, for example, two-thirds of the population takes out private plans to cover vision, dental, and prescription drug benefits — none of which are included in the public plan. Thirty-nine percent of Danish citizens carry private coverage for non-covered benefits including physical therapy.

Third, there are some countries where private insurance complements public insurance. In these places, residents buy private coverage to gain better, faster access to benefits that are covered in the public system.

Osborn points to England as an especially good example of this type of coverage. About 11 percent of the British population purchases complementary coverage that can get them faster access to specialty doctors or elective procedures.

“The UK is very committed to solidarity and equity in its health system, but at the same time, they are still very comfortable with this private insurance role,” she says. “I think it operates as a safety valve. People use it for elective surgery, for something like a hip replacement where there might be a long waitlist.”

Australia is another example of a country that has really embraced complementary coverage, to the point that 47 percent of the country’s residents carry private coverage alongside their public plans. The government actually encourages citizens to buy a private plan, offering tax rebates to those who enroll — and a lower lifetime premium for those who sign up before they’re 30.

Many countries combine these different types of private insurance too. In the Netherlands, for example, private plans run the basic benefit package — and 84 percent of Dutch residents purchase a supplementary plan to cover more benefits. Denmark has strong markets for both supplementary and complementary coverage, as do New Zealand and Australia.

The debate we’re having around universal coverage in the United States right now often centers on the health care plan offered by Sen. Bernie Sanders (I-VT). His plan — which you can read a longer explainer of here — envisions government-run health insurance that covers a wide array of benefits including vision, dental, and prescription drugs. His plan has no cost sharing for patients — meaning you don’t pay a copayment when you go to the doctor, nor do you have a deductible to hit before your benefits kick in.

The Sanders plan permits supplemental private insurance, the type that covers things that the public system doesn’t. But because the public insurance plan pretty much covers everything, it’s difficult to see what role it would play.

Not one of our peer countries has found a way to provide health care that covers all benefits at no cost to patients — the price is just prohibitive. Instead, most provide free or low-cost access to core medical services while asking patients to kick in something for the parts the government can’t afford..

Take Canada, for example. That country outlaws complementary insurance. Any benefit covered in the public system — things like doctor visits and hospital stays — cannot be covered by a private provider there.

This reflects the Canadian system’s commitment to equality and fairness. As one scholar there memorably told the journalist T.R. Reid, “Canadians don’t mind waiting in lines, as long as the rich Canadian and the poor Canadian have to wait about the same amount of time.”

This is really different from the Australian system, where the government expressly encourages citizens to enroll in private coverage with various tax rebates and penalties. There, officials think they can alleviate burdens on the public system by building a robust private system in parallel.

It’s true that Australians like their health care system more than Canadians like theirs — but it’s also true that wealthier Australians are more likely to enroll in private insurance than lower-income Australians, introducing an element of inequality that doesn’t exist in Canada. The health system you prefer turns on the values you hold.

“I think there are some basic policy issues that countries have to face,” says Anderson. “Should private insurance allow you to jump the queue? Should it allow you to get a private room? These are big policy debates in other countries.”
Posted by arclein at 12:00 AM