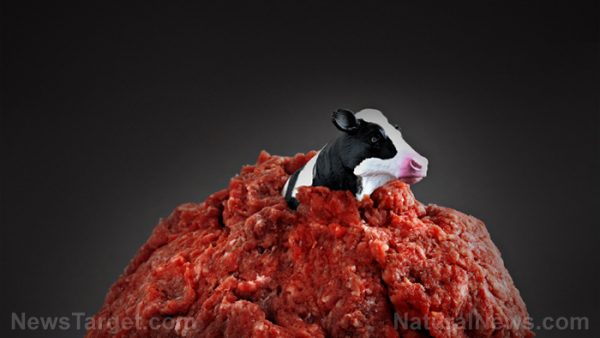 I do not think that this is so important as the dominance of industrial animal husbandry fed by a corn mono-culture.  All the lab work makes this a bad idea.
The consumer needs to shift over to a largely vegan diet in order to lower the implied risks.
Otherwise we are heading to an organic world and we will see factory operations tend to disappear as that trend accelerates.  After all we need those animals working with us on those farms.
...
Top 10 health HAZARDS commonly associated with eating conventional meats


(Natural News) American corporations often take the clean language of true clean eating and make it “dirty” by selling us tainted, toxic, gene-altered food that causes disease and disorder, all while promoting it through the use of propaganda and lies.


The latest example is the term “clean meat,” and it’s just the opposite of what you could ever imagine. This non-organic meat is created in a laboratory where scientists trick cells from a biopsy into thinking they’re still in the animal’s body. Sounds like the whole concept might spare some animals’ lives, but what if those “clean meat” cells are corrupt, cancerous, deformed, denatured?

Will the humans who consume them become what they eat, and will modern medical science even know how to cure the ensuing genetic horrors? Will we be able to distinguish between real meat and lab-made funk, or will it all just be mixed together and called “clean?”

Most conventional meat already comes with some horrific back story involving drugs, torture, misery, chemicals and more chemicals. Ever been on a road trip and driven by a huge chicken factory and wondered what that awful smell was? Hint: It wasn’t the skunks or the wastewater plant.

Exactly what do you believe these CAFO animals eat and drink – natural grass, seeds, fruit and fresh river water? Wrong. If you eat any meat that’s not organic, your chances are very high that your food’s food is corrupted.

These tortured animals are eating one third of all the food grown in the country, and that’s mostly genetically modified corn – feed that’s proven by science to cause severe health problems. Don’t bury your head in the sand and pretend your body is not acquiring these CAFO health nightmares. After all, as the saying goes: “You are what you eat.”

Did you know that nearly 90 percent of corn and soy grown in the U.S. is genetically modified to contain pesticide genes? Rats fed this corn have been proven by scientists to die early and often from enormous cancerous tumors. Most of the animals in CAFOs are slaughtered before anyone would ever know how much cancer is riddling their bodies, yet still they get kicked into the grinders, blood-drained, processed and packaged all pretty for American bellies to endure. How much meat and dairy do you consume daily? Got an irritable bowel? Fighting cancer lately?

The American CAFO sets the stage for food-borne infections. Even vacuum-packed and canned foods can cause serious illnesses due to dirty machinery and contaminated drains in factories. Most people have no clue that even the fanciest and most expensive restaurants in the country still use meat from CAFOs, because most Americans are clueless about the real difference between conventional and organic.

Let’s take a close look at what’s driving so much sickness in this country, including digestive disorders, cancer and even dementia:

#1. Artificial hormones: Injected into animals, usually during their last few weeks of life, to make them fatter and meatier, or to make them produce more milk.

#2. Antibiotics: Used to try to stave off deadly bacteria that breeds in the toxic feces and urine that coat the barn and cage flooring and infect the animals.

#3. Bacteria: Thrives in the filthy, unsanitary conditions of CAFOs and infects the animals. Many of these bacteria are now immune to antibiotics and are known as superbugs. Listeria (Listeria monocytogenes) are bacteria known to cause meningitis, and are common in foods made from milk and in processed foods like deli meat and hot dogs. Staphylococcus also causes food poisoning and can survive for months in a frozen state in food.

#4. Pathogens and parasites: Eat sushi often? Undercooked or raw meats are high sources of parasite infections. Also watch out for cold cuts, pork chops, bacon and ham. You would think livestock producers would keep their animals dewormed on a consistent basis, but more than half of CAFO animals go directly to slaughter with parasitic infections.

#6. Nitrates and nitrites: These concentrated salts can kill a hog in a matter of four hours. Known to give humans severe migraine headaches and other chronic health issues while causing dehydration and inflammation.

#7. Ammonia (and bleach): Used to kill bacteria, viruses, pathogens and parasites that remain in meat after slaughter and processing. Residual amounts often remain in the “final product.”

#9. BSE (bovine spongiform encephalitis or “mad cow disease”): Happens when cows are fed beef. It’s a fatal brain-degenerative disease with a long incubation period. It is easily transmitted to humans who eat meat contaminated by the digestive tract of infected carcasses. (Once transferred to humans it’s known as Creutzfeldt-Jakob disease.)

The average American eats 270 pounds of meat each year. Every year, the U.S. processes nearly 9 billion chickens, over 30 million cows, over 100 million hogs, and nearly a quarter million turkeys. You think those animals, before they were slaughtered, were roaming around on some happy farm in the tall grass, drinking from some clean stream and soaking up the sunshine? Think again. Take a couple of minutes now to learn exactly what CAFO really means, thanks to Truth Media.

If you’re going to continue to eat meat, buy organic and/or fresh meat, including grass-fed beef. Think it’s too expensive to eat organic meat or buy organic milk? Think again. Try comparing the difference in medical bills for those who eat organic to those who don’t. The organic food industry in general is increasing by billions of dollars every year, and for good reason. (Related: What defines “clean meat” and why it’s a sign of things to come.)