Summoned by the Monolith 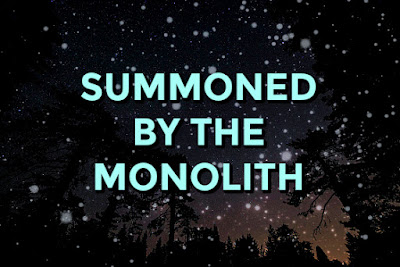 I have not seen another report like this except as part of a movie scenario.  In fact it all sounds like a movie rather than a genuine experience.   The Monolith was an artistic device in 2001 and never seen elsewhere.  The confrontation with a human voice and all that is also showmanship as well.

Way too much is going on here and what does not work is the summoning aspect without contact or protection from additional activity.    I expect this from a hoaxer but not from a genuine experience.  These guys need to be hypnotically regressed before i want to do more than throw them in the later bin.

So for your entertainment alone we present this item.


Summoned by the Monolith

I recently received a telephone call from an experiencer (I'll refer to him as 'MT') who is a medical professional living in Palm Springs, CA. As I was listening to the account, it reminded me of the film 'Close Encounters of the Third Kind' because of some similarities. I do believe that MT is sincere, but very 'excitable'; if not for a better word to describe his demeanor. He explained that since this incident, he has experienced other bizarre encounters with unknown entities. His brother and friends have also suffered strange and unexplained events.

This specific incident occurred in the winter of 1999 when MT, his brother and two other friends were young men living in southeast Los Angeles. One afternoon, they were hanging out at one of their homes, when they each experienced an unknown sensation of urgency. As they started to regain their senses, each man described a similar feeling and perception; they must go to a location ASAP! Neither man was specific as to the location, but they somehow knew where to go. Their urge to get to the mysterious location was so intense that they actually stole a relative's van.

The group climbed into the van and started to drive northeast towards the San Bernardino Mountains, an area than none of the young men was familiar with. As they continued on their trek, they each confirmed to each other that they were heading in the right direction. MT stated that he had no recollection of the trip, other than they were on the correct course. It was starting to get dark, but they were determined to achieve their objective. As they got very near to the location, the entire group screamed in unison 'STOP!' The van was parked on the side of a gravel road, as they quickly piled out of the vehicle. By this time it was totally dark, but they all knew in what direction they were to walk. They had one flashlight between them.

MT said that they were walking through an area with heavy under brush and large pine trees. It was much cooler than the city, but no one was complaining. He believes that they hiked for about 45 minutes, until they all knew that they had reached their objective. In a small clearing, a perfectly squared black rock was found. MT thinks it was about 5 ft square and that each one of them 'could see it without the flashlight.' He doesn't know how, but that it was 'revealed' to them. They scampered onto the top of the monolith and collapse into a deep sleep.

Then suddenly, they all woke to the sound of something heading in their direction. There were literally hundreds of whites orbs in various sizes darting through the trees and canopy. The sounds were unrecognizable, but each of them was scared of what was happening. They immediately jumped of the rock and began to run in the direction of van. The orbs chased them through the forest, buzzing all around the frightened men. They knew that they were getting close to the van, when unexpectedly the orbs disappeared. Within seconds, they were abruptly confronted by several large dark-colored vehicles with bright searchlights. MT said that he doesn't know how or why the vehicles suddenly appeared, but it was like they had manifested from a huge unseen portal or had descended from above.

A loud human voices howled out 'what the hell are you doing here?' MT said that none of them responded to the voice. They were confused as too why they were there and so scared that they were unable to answer. All of a sudden they were hit with an horrendous bellowing that seemed to come from above, as they all fell to the ground. That is the last thing that either of the young men remembers from the location.

Many hours later, MT said that his brother was shaking him awake. The 4 men were all in the back of the van, each in anguish from throbbing headaches. MT said he opened the side door; and as the sunlight hit him in face, it literally caused him to become ill. They looked around and realized that they were in a grocery store parking lot. They watched people going about their business, giving them strange glances. MT stated that they eventually figured out that they were in Riverside, CA, but that they had no idea how they got there.

Each of these men have no idea what occurred that day, but they all have experienced strange activity since then. MT says that he and his brother have both had encounters with unknown beings, but are not able to recall many details. I asked why he was coming forward after 18 years. MT said that he wants answers, but has been unable to get any information. He doesn't remember the location of the monolith; almost as if it was wiped from his memory. But he and the others know it happened exactly they way it was described. Lon
Posted by arclein at 12:00 AM

And, you failed to mention the green leafy plant with golden buds you found growing in the mountains and smoked right before you found the black rock.