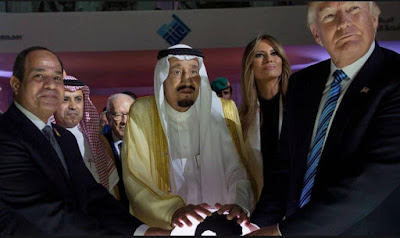 A lot more bits and pieces have trickled in to help complete the overall narrative which may well have an inflexion point today around the release of the IG report.  What has become clearer is what is meant by 'the plan' and the centrality of the Uranium One Treason.

What you do need to understand here though is that Russia had no need to ever buy USA Uranium, but Iran needed weapons grade Uranium and only the USA could successfully supply them without being in contravention of a host of international treaties with the USA or at least USA acquiescence was central.

When this was proposed, Russia cooperated, knowing full well that it was all criminal as hell, but gave them huge leverage in the USA political sphere.  I also must say that anyone else would also have cooperated for the same reason and then look for a way to blow it all away after all had been entrapped to your advantage.  The alternative was worse inasmuch as you would lose control.

I suspect that the scheme was concocted between the CIA and the Iranians in order to establish Iran as a viable nuclear treat and for blackmail leverage accruing to the CIA as they had done with North Korea.  Thus the whole scheme is full of CIA assets and Deep State players and plenty of the unwitting.

Thus we have the Genesis of Uranium One. For it to proceed, a whole raft of regulatory constraints and agencies in the USA had to be rendered compliant.  The money itself would have to come from frozen Iranian cash, now locked since the Carter years.  What was set in motion was a huge bribery scheme that naturally captured most aspects of the DEEP STATE.

Understand that we are not talking about just the heads of those agencies, but also the types of professionals who actually needed to sign of within the respective departments.  Non compliant actors would also need to be transferred as well.  It is easy to envisage hundreds of folks ultimately been paid serious money to cooperate.  The mere need to pay a bribe meant each such payment would have to be in high six figures at least and that is for any aware cog.

Enter US MIL INTEL or let us use MILTEL for short.  These guys had been keeping an open file on the ongoing political capture of the constitution by rogue elements of the CIA likely since JFK's assassination in 1993.  This had culminated with the Bush, Clinton, Obama Cabal controlling the WH after the presidency of Reagan who made peace with them to pursue his agenda.  Their role had remained passive but they certainly had grave concerns and they gathered data and monitored the development of the deep state to the extent of knowing who was who as much as possible.  Ultimately the strategy was to await for the opportunity to correct the problem as no one would believe there was a problem ordinarily.

This does suggest though that they surely acted when possible to  derail small problems and set corrective actions in play when possible.  Understand that they were operating parallel to an increasingly politicized DEEP STATE knowing this must bring about disaster and a possible attack on the Constitution.  It is one thing to understand the scope and nature of a problem and quite another to design a solution.  All the while the whole world is running blind.

Then the CABAL inserted Obama who appears to be an Islamist masquerading as a Christian and also a committed follower of Alinsky et al.  Recall that the NWO had also put their resources behind the CABAL in order to pursue their agenda which is essentially NAZISM REDUX.  Their common enemy was the USA Constitution.  Obama quickly began the slow process of inserting acolytes throughout the USA Government, essentially at every level.  They certainly focused on the Judiciary in particular but I suspect all levels were infiltrated as positions open up.  You must understand that once this process is established, it can continue even when you are not in power.

The actual candidates for such service was easily developed in our present system of higher education which channels all non STEM student through a battery of courses under the name of Political Science,Sociology and Anthropology which intellectually captures most of them.   These typical B students are then brainwashed into the inevitability of the so called progressive agenda along with a healthy respect for Karl Marx.   Those most compliant are then promoted into government tasks and often never learn to question their brainwashing even years later.

We can presume that MILTEL sees things this way as it has been a world wide phenomena that has never been rooted out and with which they must contend continuously.   We won the Cold War and woke up to an ongoing action taking place under our noses attempting to create the same conditions in the USA with all sorts of assorted acolytes already in government.  I have always found it difficult to believe just how stupid good people can be rendered  but acknowledged a long time ago that those are the facts on the ground.

The Global counterattack is still a ways away and must coincide with my plans to end global poverty for lasting success.  That been said, let us return to the developing narrative.
The Obama program of assault on the USA government pretty well demanded a full four terms in order to make is irreversible.  There was such a plan and it has been talked about openly and it is apparently derived from the thinking of Alinsky.  Hilary's task was to complete the program and in order to establish her credentials she was placed in the Administration as Secretary of State.

And into this cockpit we also have the DEEP STATE agenda as well which involved us in Uranium One along with Hilary's brazen Pay to Play enterprise.  Thus the primary thread was the Alinsky inspired conspiracy of a NWO takeover of the USA government through old fashioned subversion to produce an authoritarian regime controlled by the CABAL.  This would lead to disarming the citizens and elimination of citizen rights through bought and paid for electors who mostly would never have a clue.

Sadly the plan was real enough and it still had to accommodate the real time demands of the DEEP STATE to also accommodate Uranium ONE. What that then triggered was a massive activation of DEEP STATE activity and full MILTEL surveillance and real concern.  This was not a plausible attempted Alinsky Coup with an amorphous due date but a treasonous conspiracy rolling out in real time engaging and activating many deep networks early in pursuit of a lot of money.

As it developed MILTEL built up the database of participants and also began developing a plan to bring down the whole enterprise using the physical reality of the massive bribery scheme.   The first cut of that plan seriously considered an outright military coup.  That was the least desirable course.  Instead they understood that one individual could actually act as the leader of the attack and possibly win electoral control. I want to say that he was an obvious prospect at the time only because i came to the same conclusion with only a fraction of the information regarding the scale of the problem.   Like Trump, I had discerned the problem intuitively and knew that an extraordinarily effective CEO with a current public profile was needed.

Thus they approached him and laid out the scale of the problem and their plan to overcome it.  MILTEL really did play the hand of GOD here.  That is how the counter attack on the CABAL and DEEP STATE began.  At least we can now understand the natural genesis of those 35000 sealed indictments out there right now and the steady drum beat of unexpected celebrity suicides bubbling up from the parallel assault of the natural pedophile conspiracy that provided the glue and enforcement for the DEEP STATE..

I also must infer that MILTEL was also able to run some interference for Trump against the DEM vote rigging program that has now been shown to involve over 7,000,000 votes and that this allowed him to at least win the electoral college on election night.  Those votes were simply switched electronically from Trump to Clinton in targeted polls by a Soros owned operation..  One has a vision of hacking and counter hacking going on.  It was still a thunderclap for the CABAL and the DEEP STATE who were clearly not aware that they were up against MILTEL.

I have posted this earlier, but i also think that Robert Mueller has been recalled back to service as a Marine Colonel and he is operating a full press sting operation as well and everything we have been fed is show to draw the bad boys out.

At 35,000 sealed indictments, the just announced addition of 311 assistant attorney generals by the DOJ comes into complete focus.  Both the FBI and the DOJ have been working steadily for a year and a half to roll up what has to be the most unbelievable coup attempt in human history.  The Marines have also been preparing GITMO for a major influx of enemy combatants since December.  The scale of it all leaves no room for serious doubt.

Parallel to all this is the full press assault underway against global pedophilia as well.  I do not think that many of the sealed indictments are involved in this.  There has been an steady round of arrests happening there and that includes Harvey Weinstein's world.  I think that the wolves have been cut lose there and the steady drip of revelations tells me that the whole network is crumbling and actually been torn apart before our eyes.

In the nonce, the Clinton's continue to keep up appearances as the global silence grows deeper.  when the ax falls, Trump will bestride the world in a way not seen since the collapse of Japan.  A real WAR will be seen to have been fought and it was global.  While we are waiting, peace is breaking out all over as CIA agitation is abruptly ended...
..