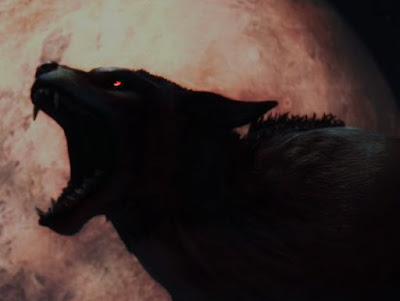 The inventory of available reports continues to grow.  It took a long time for me to fish out the first twenty or so, but how we do have a common descriptor with dogman and until we capture a couple we will not be able to identify it as the Giant Sloth.

There is a range of sizes and we normally see the males.  the females are smaller and sport a large tail and lack the robust upper shoulder structures, thus looking more like a dog.  It is the male seen on two legs commonly as well.

It seems to be able to project fear as well.

The following comments were found at Beyond Creepy and other locations, in reference to YouTube upright canine / dogman accounts:

“When I was 18 years old I was visiting a friend who lived out in the boonies. She had 20 acres of land, horses and had no neighbours at all living around her. During the visit I helped her with some outside chores that took almost the full day. It was around 6:30pm, we had just finished working, she was about 50 feet away from me with another person chatting and I was looking for a good place to walk my dog. As I stood there looking at some open field with a large bluff of trees behind it my eye caught a glimpse of a dark black figure hiding behind some trees. It stood upright and seemed curious about me. I had no idea that dogman existed back then so my initial thought was 'why is someone wearing a fur costume in the middle of nowhere'. I stared at it for awhile as it stared at me. It had a snout like a dog, long straggly furred arms with long fingered hands, I could not see its legs or a tail because of the shrubs and the tree. Now that I know about the dogman, I do believe that is what I witnessed that day.” - Allyson Jayne

“A very very good friend of mine was working on a ranch in Montana in about 1986. He was herding up some horses and went up over a hill with forest on either side with a clearing on his left. The horses were uneasy which brought him to notice something in a clearing to his left. There squatted over an animal was this huge grey, red-eyed dog thing. What really stood out to him was it had three really razor-sharp long claws. The light was shining through the trees on to him and it turned and looked right at him and then turned back to eating his prey. I always believed my friend and his description is clear as day in my own mind. Never heard anyone else talk about the three claws though so that's why I always listen to other people's Dogman stories.” - Catherine Hughes

[That is our boy.  Those three claws are rarely clearly seen as they are not expected at all, but that is the critical signature of the three toed giant sloth of which we have ample fossils thanks to la Brea.  Arclein ]

“When I was a child in Mississippi going home after a football game at school something liked that chased me on a dark road. I ran to a neighbors' house. I thought it was going to kill me and I am scared of this thing today from over 45 years ago. I didn't say it was a dog man but it had the fire red eyes hiding in a cornfield and was trying to attack me. It would not come into the light and is the only thing I think that saved me. You can believe what you want!!!” - Powerdip

“My uncles were attacked by a creature like this (Dogman) going through a jungle area of Mexico, in the 70's. They were driving a big cargo truck at night when something jumped on the back of the truck. They didn't stop to see what it was because there where no lights on the road. My uncle on the passenger side saw this devilish creature that looked like a dog climbing closer to the cabin of the truck. They said the thing was huge. My uncle's screaming in fear when they saw it, said they tried to shake the truck but it would fall off until they hit it against a tree on the opposite side of the road/path. They kept driving all night to the morning all freaked out. When they got to a gas station in a village they saw gash marks and hand but animal prints on the windows where it was trying to get in and on the back trailer. They told their story to some of the villager or farmer and they told them that dogmen-like demons roam those areas. And they were not the only ones who have been attached before. They were so freaked out the hair on both arms rises even telling their experience. They said they never drove through Central America besides the cities or villages at night ever again. I wish I could have recorded them telling the stories. They have died already, but even before they died they stuck with what happened to them and they never did drugs.” - Claudia C

“I remember years ago when I was about 13 running from bullies up at our woodland in Northern Ireland... I climbed an old oak tree, the only one in the forest but it had really good cover. You could not see me when I was up in it. I hid there all night long. I was that scared, but it was about 2 in the morning when I heard growling and something sniffing around the bottom of the tree. I thought at first it was a really big dog until it stood up on 2 legs. It was huge - bigger than my father and he was touching 6 foot 7 and it had hands with claws not paws and pointed ears and a long snout like a German Shepherd has but only longer and its eyes glowed like looking in a mirror. Now I told a few friends and teachers what I had seen and they made fun of me even the teachers asking me if I had seen a pink elephant as well, but I know what I saw and no-one can tell me different.” - Daniel McMullan

[  this is important as it is old world.  Also believed extinct there as well.  I am surprised that the creature did not come up the tree, but likely knew that it could not ambush the individual up there and was been careful,  those claws are meant for climbing. acrclein ]

“On my way home from my boys basketball practice our head light hit a black cloudy mist moving across the road and it turned into a large, standing-up-on-two-legs wolf. We were horrified. For months I had nightmare about this. My mind just had a hard time trying to comprehend what this thing was. As our car passed it, we got a very good look at it. The feeling of fear was so intense for weeks. It happened two miles from my house and I live in the country on Highway 72 in Bollinger County, Missouri. We didn't tell anyone but my husband because if I wouldn't had seen this, I wouldn't of believed it myself.” - Denise O

“I had one of these creepy things (Dogman) jump/fly in front of my motorcycle at 1:00 AM in August of 2017, Rockingham County, Virginia. It was a rural area between two cornfields. I know what I saw. It was UNREAL and inches in front of me while I was going 60 MPH. It just missed me by inches.” - Boulder Nelson
Posted by arclein at 12:00 AM