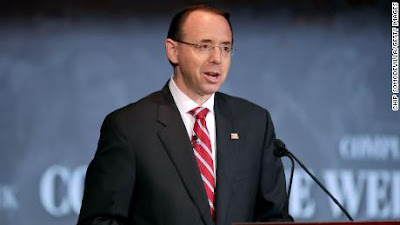 RR  is very much at the center of Comey's attempt to damage the incoming Trump presidency and is now in charge of the 'Mueller' investigation.   I suspect both he and Mueller are playing a double game in support of the clean up of the FBI in particular or alternately they are the principals of a horrendous plot.


Sessions recused himself to allow them to run their game without compromising himself which would have been a desired outcome for the DEEP STATE.  He in the meantime has launched serious investigations aimed at rolling up that DEEP STATE.

This speech is a worthy read and worthy of his position.  I hope in the end he is remembered for this and goes on to successfully lead a cleansed FBI.  .