Wayfair decision by Supreme Court will mean millions for governments 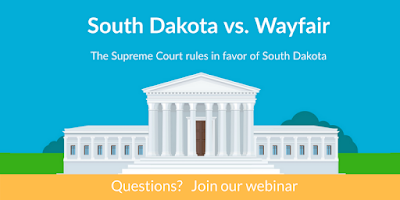 This happens to be important of course and it really is about USA sale tax reform generally.  The rest of the world applies a blanket VAT  whereas the USA does not.  This has been to everyone else's  actual advantage and this can be ended easily by applying a federal VAT.

Doing this correctly revolutionizes government finance and ends most needs for tariffs in particular.  Better yet, splitting that revenue with the States eliminates State sales tax as well while funding medicare at the State level.

In the short run we will produce a mish mash of taxation and a rising corporate lobby for real tax reform.  After all, they also know what works best..

Wayfair decision by Supreme Court will mean millions for governments

Following the announcement by the Supreme Court in South Dakota v. Wayfair, shares of online retail giants Amazon, Etsy, Overstock, and Wayfair dipped on Thursday. The high court ruled that states can impose sales on online purchases even on businesses that do not have a physical presence there. The decision reversed a 1992 ruling in Quill Corp. v. North Dakota that held that sellers only had to collect state sales taxes if they had a warehouse or office in the state.

In a 5-4 decision, the Supreme Court ruled that states can require online sellers to collect sales taxes, whether or not they have a physical presence in the state. Justice Anthony Kennedy wrote the opinion, while Justices Clarence Thomas and Neil Gorsuch each filed concurring opinions. According to Kennedy, modern online commerce “does not align” with the physical presence required in the 1992 decision. Chief Justice John Roberts wrote a dissenting opinion and was joined by Justices Stephen Breyer, Sonia Sotomayor, and Elena Kagan.

States stand to collect billions in additional taxes for big and small retailers. Amazon, for example, collects state sales taxes on the products it sells directly, but it does not do so for third-party sellers except for those in Pennsylvania and Washington, where state laws require. According to Joe Weisenthal of Bloomberg, the decision may become a burden to online retailers. Weisenthal tweeted a screenshot of a chart showing the diving share prices for Amazon, Etsy, Overstock, and Wayfair on Thursday.

According to the federal Government Accountability Office, local and state jurisdictions would have been able to collect as much as $13 billion more in 2017 had required sales tax payments from online sellers. Only Alaska, Delaware, Montana, New Hampshire, and Oregon do not impose sales taxes. Thirty-one states already impose online taxes.

Grover Norquist of Americans for Tax Reform released a statement after the decision decrying the court’s decision, stating that it effectively allows taxation without representation. He warned that states are now empowered to “export sales taxes, personal and corporate income taxes,” while also opening “the door for the European Union to export its tax burden onto American businesses—as they have been demanding.” He believes that if physical presence of a business in a state is no longer required, then the same holds true for personal or corporate income.

In an email response to Spero News, Stephen Hayes of FAIRtax wrote that Amazon and other large online sellers were already collecting and remitting sales taxes to the states, and that “this decision clearly signals that internet sales in a state can be subject to tax.” He wrote that Thursday’s decision “eliminates a 4 percent advantage that some online sellers have over local retailers and other online sellers who do collect the state sales tax.”

Hayes’ organization advocates the elimination of income tax and the Internal Revenue Service. It advocates a “fair tax” that would be imposed on all sales of new consumer goods and retail services” that are collected by sellers and remitted to the federal treasury.

“Since [fair tax] is collected by the states for the federal government, it will be easy to also collect the state sales/use tax at the same time. Then everyone obeys the law and the states get their money. Also, no one is disadvantaged because everyone follows the same rules.”

In an email response from the Cato Institute, analyst Ilya Shapiro wrote that Norquist’s point about taxation without representation is correct, but he does not expect that the Wayfair decision puts Americans in jeopardy of any more European taxation. “While the ruling presents a serious and troubling expansion in the number of tax regimes Americans find themselves subject to,” Shapiro wrote, it is “based on arguments regarding the regulation interstate commerce under the U.S. Constitution.”

As for meddling on the part of the European Union in the US, Shapiro wrote: "The EU can surely try to tax whomever it wants, but that raises questions separate from any constitutional ones the Supreme Court decides." This may mean negotiation at the trade and diplomatic level on the part of the US and the EU. Unlike the United States, which imposes income taxes on Americans whenever they reside, most member countries of the EU do not do so. Shapiro wrote that the new decision means that “sales taxes will now be analyzed similarly to personal and corporate income taxation—a Virginian is already subject to California income tax if he earns a certain amount of income in California—rather than the other way around.”
Posted by arclein at 12:00 AM