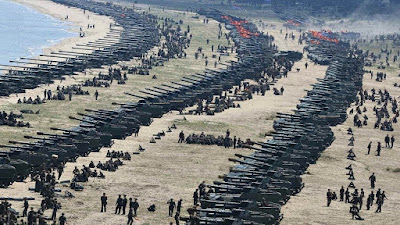 This youtube report caught my eye and is worth a view.

The basic premise though is completely correct.  India has a completely modern military that has only been enhanced with rising Indian prosperity.  All its original doctrines compare to NATO and that should give any adversary pause.

This two-year cycle of military expansion would also entirely mobilize the whole Indian population and easily double its GDP in the process.

The second problem is that India would immediately seize Tibet.  This puts any real fighting far to the north out in the deserts.  Again India would retain short supply lines been quickly upgraded while China would be operating at a long distance across lines easily interdicted.   This is known as an entirely stupid military plan and can work only against a weak enemy.

That still leaves the road into Pakistan which has great commercial potential and little military potential not least because India is engaged in a shooting confrontation with Pakistan virtually on the damn road.  So the same day that Tibet is overrun would see this route slammed shut and doing an opposed advance through that piece of geography is ridiculous.

There will surely never be such a war.  Those same reasons are why Pakistan merely makes noises to keep their masters happy and have been doing such for sixty years.