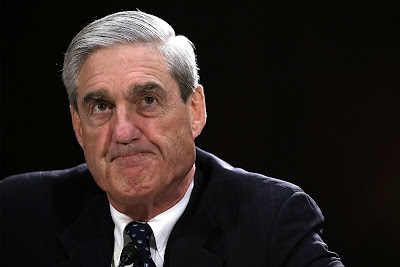 Far too often, Americans think that they live in an information cocoon impenetrable to outsiders and are rudely shocked to discover that outsiders can be even better informed.  I think that happened here.

No one calculated if the Russians so indicted had a good motive to show up and it is obvious that someone did and decided to have some fun.

How would you respond upon discovering that you had been charged in absentia for a bogus crime merely to save an investigator's butt.  If money was no object, the temptation to turn the tables would be overwhelming.  That is exactly what happened here and now Mueller must come up with evidence that never existed..

Special Counsel Robert Mueller is scrambling to limit pretrial evidence handed over to a Russian company he indicted in February over alleged meddling in the 2016 U.S. election, according to Bloomberg.


Mueller asked a Washington federal Judge for a protective order that would prevent the delivery of copious evidence to lawyers for Concord Management and Consulting, LLC, one of three Russian firms and 13 Russian nationals. The indictment accuses the firm of producing propaganda, pretending to be U.S. activists online and posting political content on social media in order to sow discord among American voters.


The special counsel’s office argues that the risk of the evidence leaking or falling into the hands of foreign intelligence services, especially Russia, would assist the Kremlin’s active “interference operations” against the United States.


“The substance of the government’s evidence identifies uncharged individuals and entities that the government believes are continuing to engage in interference operations like those charged in the present indictment,” prosecutors wrote.


Improper disclosure would tip foreign intelligence services about how the U.S. operates, which would “allow foreign actors to learn of those techniques and adjust their conduct, thus undermining ongoing and future national security operations,” according to the filing.


The evidence includes thousands of documents involving U.S. residents not charged with crimes who prosecutors say were unwittingly recruited by Russian defendants and co-conspirators to engage in political activity in the U.S., prosecutors wrote. –Bloomberg


Mueller also accused Concord of “knowingly and intentionally” conspiring to interfere with the election by using social media to disparage Hillary Clinton and support Donald Trump.


And Concord Management decided to fight it…


As Powerline notes, Mueller probably didn’t see that coming – and the indictment itself was perhaps nothing more than a PR stunt to bolster the Russian interference narrative.

I don’t think anyone (including Mueller) anticipated that any of the defendants would appear in court to defend against the charges. Rather, the Mueller prosecutors seem to have obtained the indictment to serve a public relations purpose, laying out the case for interference as understood by the government and lending a veneer of respectability to the Mueller Switch Project.


One of the Russian corporate defendants nevertheless hired counsel to contest the charges. In April two Washington-area attorneys — Eric Dubelier and Kate Seikaly of the Reed Smith firm — filed appearances in court on behalf of Concord Management and Consulting. Josh Gerstein covered that turn of events for Politico here. –Powerline Blog


Politico’s Gerstein notes that by defending against the charges, “Concord could force prosecutors to turn over discovery about how the case was assembled as well as evidence that might undermine the prosecution’s theories.”


In a mad scramble to put the brakes on the case, Mueller’s team tried to delay the trial – saying that Concord never formally accepted the court summons related to the case, wrapping themselves in a “cloud of confusion” as Powerline puts it. “Until the Court has an opportunity to determine if Concord was properly served, it would be inadvisable to conduct an initial appearance and arraignment at which important rights will be communicated and a plea entertained.”


The Judge, Dabney Friedrich – a Trump appointee, didn’t buy it – denying Mueller a delay in the high-profile trial.


The Russians hit back – filing a response to let the court know that “[Concord] voluntarily appeared through counsel as provided for in [the Federal Rules of Criminal Procedure], and further intends to enter a plea of not guilty. [Concord] has not sought a limited appearance nor has it moved to quash the summons. As such, the briefing sought by the Special Counsel’s motion is pettifoggery.”


And the Judge agreed…


A federal judge has rejected special counsel Robert Mueller’s request to delay the first court hearing in a criminal case charging three Russian companies and 13 Russian citizens with using social media and other means to foment strife among Americans in advance of the 2016 U.S. presidential election.


In a brief order Saturday evening, U.S. District Court Judge Dabney Friedrich offered no explanation for her decision to deny a request prosecutors made Friday to put off the scheduled Wednesday arraignment for Concord Management and Consulting, one of the three firms charged in the case. –Politico


In other words, Mueller was denied the opportunity to kick the can down the road, forcing him to produce the requested evidence or withdraw the indictment, potentially jeopardizing the PR aspect of the entire “Trump collusion” probe.


And now Mueller is pointing to Russian “interference operations” in a last-ditch effort.


Of note, Facebook VP of advertising, Rob Goldman, tossed a major hand grenade in the “pro-Trump” Russian meddling narrative in February when he fired off a series of tweets the day of the Russian indictments. Most notably, Goldman pointed out that the majority of advertising purchased by Russians on Facebook occurred after the election, were hardly pro-Trump, and they was designed to “sow discord and divide Americans”, something which Americans have been quite adept at doing on their own ever since the Fed decided to unleash a record class, wealth, income divide by keeping capital markets artificially afloat at any cost.

Rob Goldman
✔@robjective
16 Feb
Replying to @robjective
The majority of the Russian ad spend happened AFTER the election. We shared that fact, but very few outlets have covered it because it doesn’t align with the main media narrative of Tump and the election. https://newsroom.fb.com/news/2017/10/hard-questions-russian-ads-delivered-to-congress/ …

The main goal of the Russian propaganda and misinformation effort is to divide America by using our institutions, like free speech and social media, against us. It has stoked fear and hatred amongst Americans. It is working incredibly well. We are quite divided as a nation.