The Russians Were Involved. But It Wasn’t About Collusion. 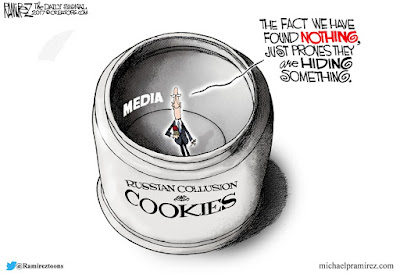 No it never was about collusion and really could never have been. Everyone fails to recall that no one actually believed that Tump could prevail.  Which implies what can be best descibed as mischef making and these guys were the easiest targets even though it all amounted to the famous nothing burger.

That private citizen Trump sold real estate to rich criminals who occasionally were Russian is expected.  Their privacy happens to be important as well.  And we can be certain that all such tansactions were lawyer to lawyer and face time was unlikely even then.  That is what you have salemen for.


Did he sell condos to Russians - i hope so!.

As this item makes clear this was only Russian mischef making top to bottom and then likely leaked to Hilary as well.

The Russians Were Involved. But It Wasn’t About Collusion.

Russians are fond of a proverb, “besplatniy sir biyvaet tol’ko v mishelovke”: “Free cheese can be found only in a mousetrap.”

Having long considered the United States its main enemy, the Kremlin deploys a full quiver of intelligence weapons against America and its national security agencies, political parties and defense contractors. Its intelligence services, though best known for clandestine operations to recruit spies, also run covert “influence operations” that often use disinformation to try to affect decisions or events in rival countries. A central tool of those operations is “kompromat,” “compromising material”: things of seemingly great value that are dangled, at what appears to be no cost, before unwitting targets. This is the “free cheese” that ensnares victims in a trap.

I know all this from having spent much of my 30-year government career, including with the C.I.A., observing Soviet, and then Russian, intelligence operations. I came to realize that President Vladimir Putin, who spent his formative years in the K.G.B., the Soviet Union’s main intelligence agency, and served as director of its successor agency, the F.S.B., wants, as much as anything, to destabilize the American political process. For all his talk of desiring friendly relations, Mr. Putin favors a state of animosity between our two nations. By characterizing the United States and NATO as Russia’s enemies, he can attack within his own borders what threatens him the most — the ideals of liberty, freedom and democracy, of which the United States has been a defender.

This background is necessary for understanding the real meaning of the June 2016 meeting in Trump Tower between Kremlin-connected Russians and three representatives of Donald Trump’s campaign: his son, Donald Trump Jr., his son-in-law, Jared Kushner, and Paul Manafort, then the campaign manager. The evidence that has emerged from this meeting strongly suggests that this was not an effort to establish a secure back channel for collusion between Moscow and the Trump campaign but an influence operation with one simple objective: to undermine the presidential election.

No conclusive proof has yet emerged that the Kremlin arranged this meeting, and the Russians involved have asserted they were not working for the Putin government. Mr. Kushner himself told Senate investigators that there was no collusion between the Trump campaign and Moscow. But to me, the clearest evidence that this was a Russian influence operation is the trail of bread crumbs the Kremlin seemed to have deliberately left leading from Trump Tower to the Kremlin. This operation was meant to be discovered.

The meeting was arranged by a British publicist named Rob Goldstone, who told Donald Trump Jr. via email that his client, the Russian pop star Emin Agalarov, wanted to share incriminating evidence on the Clinton campaign that had been obtained from the Russian government. Sophisticated Russian intelligence tradecraft that was meant to be kept secret would not have permitted such an insecure opening gambit for establishing continuing communication with the Trump campaign. They would not have used something as insecure as email, or relied on liaison cutouts who could so easily be traced to the Kremlin. Instead, the Russians who attended the meeting had obvious Kremlin ties, including Natalia Veselnitskaya, a Moscow lawyer who has done work on behalf of the F.S.B.; Rinat Akhmetshin, a Russian-American lobbyist who served in the Soviet military; and Mr. Agalarov, whose father is a real estate titan close to Mr. Putin.

I can’t say how news of the meeting broke, but once it did, Mr. Putin achieved one of his goals: throwing the American government into greater turmoil amid the frenzied media coverage, escalating F.B.I. and congressional investigations and intensified political conflict. And with the revelation that Russia was behind the meddling, Mr. Putin achieved another objective: to allow Russia, despite its economic and military inferiority, to claim that it could rival the United States on the global playing field. He could do all this while denying, with a wink and a nod, any involvement.

If this all sounds far-fetched, consider that the Russians have a long history of these kinds of operations, including in the United States. In the 1968 presidential campaign, Soviet Ambassador Anatoly Dobrynin unsuccessfully offered financial assistance to the Democratic candidate, Hubert Humphrey, according to a K.G.B. archivist, Vasili Mitrokhin. Mr. Mitrokhin also uncovered a Soviet intelligence campaign to spread vicious attacks in 1976 against Senator Henry Jackson, a Democratic presidential candidate known for his anti-Soviet views. Russia’s active-measures operations slowed during the 1990s under President Boris Yeltsin, but Mr. Putin has resurrected the art of covert influence often in conjunction with cyberwarfare, particularly against Georgia, Ukraine and the United States.

The most effective method to combat Russia’s intrusions into our political process is to be clear, transparent and honest with ourselves about how the Kremlin operates and what it hopes to achieve. The Trump campaign did not need to collude with the Kremlin for Russia’s cyber and covert influence campaign to be considered a serious breach of our electoral process, and hence our national security. The Trump administration and both parties in Congress need to speak with one voice against Russia’s attack on our democratic institutions. If they do not, Mr. Putin will have won.

Daniel Hoffman, a former chief of station for the C.I.A., worked for over 30 years for the United States government in Russia, Europe, the Middle East and South Asia.