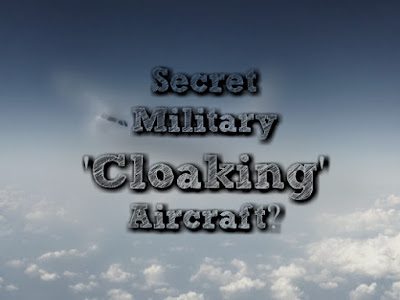 Obviously a test protocol with a test plane and available secured eyeballs and hardware to observe the test itself.  The plane was large but otherwise not unusual..

Yet the cloaking demonstrated is excellent.  You effectively see the background.  That is as good as it gets and it has been fitted onto a conventional craft as well.  Thus the technology is plausibly ready for deployment.

Jeannie in Mansfield, Ohio called in to tell of a weird sighting she had:

“So I'm 50 years old. I'm a military wife since I was 17. I've lived near several bases. My ex was with aviation with regard to fuels. I've been on Independence Day cruises and been out on an aircraft carrier, lived near bases including overseas particularly in Spain. Aviation boats and fuel and, so I'm just saying, I would not have believed this happened had these two ladies not been standing next to me. I wish to this moment that I had gotten their information but nonetheless, I'll try to make this quick because I know you have a lot of callers.

I was going in a local grocery store. We live in a town that has a large reserve community, as far as reserve forces. And an aircraft wing that operates out of a local small airport. So I'm in that side of town and I look up. It's a cloudy day and I see this extra large aircraft and I counted 25 plus windows in this. It was passing through a cloud at the time and I looked at these ladies next to me because they were loading their groceries in the car, as well as I was, and I said, "That's kind of a big aircraft for around here" and at that moment, I kid you not, had they not been standing there, it was like somebody flipped a switch and it it became invisible, and blended in with the clouds and the background color. And all you could see was the windows. I looked at the ladies and they looked at me at the same time and I said and we both said, "Did you just see that?" And we look back at it, and it just looked like somebody flipped the switch back and you could see it again. I swear to you, I'm not taking drugs.

I didn't get their information. I should have but in this little small town of mine, to have an aircraft that large...I mean, this was like compared to like a C-130. I forgot to tell you the most important part. This aircraft had no markings. No tail numbers. I mean now, granted, it had its emergency blinkers but there were no markings as far as advertising and there was no tail numbers. I kid you not. I think it was a test of a cloaking device. I believe it was probably military. I'm not saying it was alien. All I know is what I saw and had I not had someone standing next to me to verify what I saw, I would have thought I just totally went round the bend."