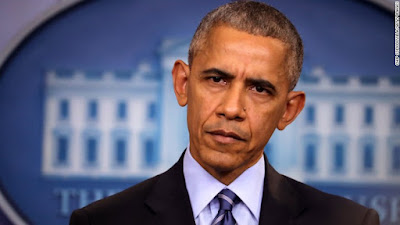 As it should of course.  However, it is also rather clear that this is a hard ball tactic aimed at getting congress to generate a proper immigration act.  The problem is that it is even necessary at all.

More obviously the original resolution was by executive order and that is also deemed unconstitutional no less by observers.  Thus the situation added to the behavior in simply applying the law by the administration is a tell that we have a war going on that has eliminated rational resolution without serious duress applied.

What Trump has done is put himself in position to blame his opponents for their real failures, rather than wearing it all himself.  This may work to focus their attention as well instead of dreaming up bombs to throw at Trump.

'It’s up to Members of Congress to protect these young people and our future. I’m heartened by those who’ve suggested that they should.'

Announced in June 2012, DACA was implemented to give undocumented immigrants who were brought here as children some peace of mind while Congress worked on a longer-term solution to the country's immigration woes. After the Trump administration announced that it would be ending the program over the next six months, Obama delivered a powerful defense of his original action and the people it helped.

Immigration can be a controversial topic. We all want safe, secure borders and a dynamic economy, and people of goodwill...

1. "This is about young people who grew up in America — kids who study in our schools, young adults who are starting careers, patriots who pledge allegiance to our flag," Obama wrote.
The people benefitting from DACA didn't do anything to cause their current predicament. As young children, they were brought here, and it's the only home many have ever known.

"These Dreamers are Americans in their hearts, in their minds, in every single way but one: on paper. They were brought to this country by their parents, sometimes even as infants. They may not know a country besides ours. They may not even know a language besides English. They often have no idea they’re undocumented until they apply for a job, or college, or a driver’s license."

2. "Over the years, politicians of both parties have worked together to write legislation that would have told these young people ... you’ll get a chance to stay and earn your citizenship"

Critics chide Obama for performing an end-run around Congress in implementing DACA, but the truth is he had pushed the legislature to take action. It was only after the bill, known as the DREAM Act, stalled again that Obama did what he could with an executive order. Inaction wasn't an option, as some 800,000 people who were brought to this country as children and never knew any other country as home floated in limbo.
The goal of the DREAM Act was to provide legal status and a path to citizenship for these young people provided they met a number of requirements (such as going to college or serving in the military).
"That bill never came. And because it made no sense to expel talented, driven, patriotic young people from the only country they know solely because of the actions of their parents, my administration acted to lift the shadow of deportation from these young people, so that they could continue to contribute to our communities and our country."
3. "To target these young people is wrong — because they have done nothing wrong."
Beyond that, removing those who are here because of DACA makes us a weaker country both culturally and economically.
"It is self-defeating — because they want to start new businesses, staff our labs, serve in our military, and otherwise contribute to the country we love. And it is cruel. What if our kid’s science teacher, or our friendly neighbor turns out to be a Dreamer? Where are we supposed to send her? To a country she doesn’t know or remember, with a language she may not even speak?"

The immigration system is a mess, and it does need reform. People across the political spectrum agree that something needs to be done about our current set of laws and regulations, but to take that out on the Dreamers is nothing short of hard-hearted.

"And now that the White House has shifted its responsibility for these young people to Congress, it’s up to Members of Congress to protect these young people and our future. I’m heartened by those who’ve suggested that they should. And I join my voice with the majority of Americans who hope they step up and do it with a sense of moral urgency that matches the urgency these young people feel."

Obama closes out his statement with a message about the essence of what it means to be an American that's followed him from his early days in politics to his post-presidential career. With the lives of hundreds of thousands of people who are Americans for all intents and purposes on the line, it's a message that may be more important than ever before.

"What makes us American is not a question of what we look like, or where our names come from, or the way we pray. What makes us American is our fidelity to a set of ideals – that all of us are created equal; that all of us deserve the chance to make of our lives what we will; that all of us share an obligation to stand up, speak out, and secure our most cherished values for the next generation. That’s how America has traveled this far. That’s how, if we keep at it, we will ultimately reach that more perfect union."
Posted by arclein at 12:00 AM