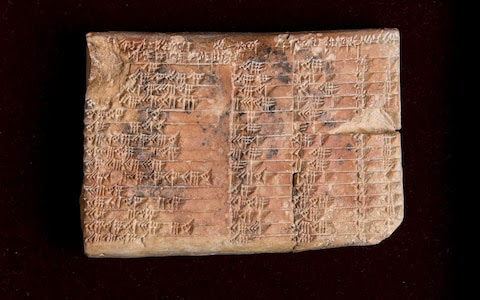 Another take on this important artifact which also confirms my own speculations. What is described is a practical trig for builders in the form of useful ratios.

Recall that the lack of the zero made the use of ratios mandatory.  Thus such a trig table was inevitable.

all good stuff.  At least it shows us a little of how it was all done.  I haveactually reconstructed much of all this but it is nioce to see confirmation.

.
3,700-year-old Babylonian tablet rewrites the history of maths - and shows the Greeks did not develop trigonometry

The tablet is broken and probably had more rows, experts believe Credit: UNSW

A 3,700-year-old clay tablet has proven that the Babylonians developed trigonometry 1,500 years before the Greeks and were using a sophisticated method of mathematics which could change how we calculate today.

The tablet, known as Plimpton 332, was discovered in the early 1900s in Southern Iraq by the American archaeologist and diplomat Edgar Banks, who was the inspiration for Indiana Jones.

The true meaning of the tablet has eluded experts until now but new research by the University of New South Wales, Australia, has shown it is the world’s oldest and most accurate trigonometric table, which was probably used by ancient architects to construct temples, palaces and canals.

However unlike today’s trigonometry, Babylonian mathematics used a base 60, or sexagesimal system, rather than the 10 which is used today. Because 60 is far easier to divide by three, experts studying the tablet, found that the calculations are far more accurate.

“Our research reveals that Plimpton 322 describes the shapes of right-angle triangles using a novel kind of trigonometry based on ratios, not angles and circles,” said Dr Daniel Mansfield of the School of Mathematics and Statistics in the UNSW Faculty of Science.

“It is a fascinating mathematical work that demonstrates undoubted genius. The tablet not only contains the world’s oldest trigonometric table; it is also the only completely accurate trigonometric table, because of the very different Babylonian approach to arithmetic and geometry.

“This means it has great relevance for our modern world. Babylonian mathematics may have been out of fashion for more than 3000 years, but it has possible practical applications in surveying, computer graphics and education.

“This is a rare example of the ancient world teaching us something new.”

The Greek astronomer Hipparchus, who lived around 120BC, has long been regarded as the father of trigonometry, with his ‘table of chords’ on a circle considered the oldest trigonometric table.

A trigonometric table allows a user to determine two unknown ratios of a right-angled triangle using just one known ratio. But the tablet is far older than Hipparchus, demonstrating that the Babylonians were already well advanced in complex mathematics far earlier.

Babylon, which was in modern day Iraq, was once one of the most advanced cultures in the world

The tablet, which is thought to have come from the ancient Sumerian city of Larsa, has been dated to between 1822 and 1762 BC. It is now in the Rare Book and Manuscript Library at Columbia University in New York.

“It opens up new possibilities not just for modern mathematics research, but also for mathematics education. With Plimpton 322 we see a simpler, more accurate trigonometry that has clear advantages over our own.

“A treasure-trove of Babylonian tablets exists, but only a fraction of them have been studied yet. The mathematical world is only waking up to the fact that this ancient but very sophisticated mathematical culture has much to teach us.”

The 15 rows on the tablet describe a sequence of 15 right-angle triangles, which are steadily decreasing in inclination.

The left-hand edge of the tablet is broken but the researchers believe t there were originally six columns and that the tablet was meant to be completed with 38 rows.

“Plimpton 322 was a powerful tool that could have been used for surveying fields or making architectural calculations to build palaces, temples or step pyramids,” added Dr Mansfield.

The new study is published in Historia Mathematica, the official journal of the International Commission on the History of Mathematics.