Can the GOP’s Shotgun Marriage Be Saved? 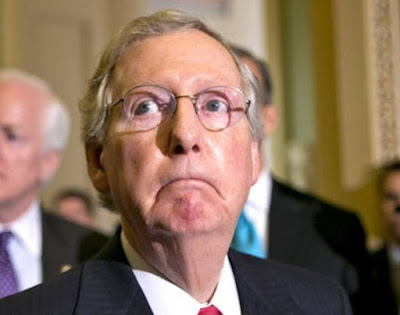 Bah!   It has not been a tidy transition and the tasks ahead are salutary.  In fact it is astonishing just how messy the public aspect of the transition has been.  The mainstream press has been at best sore losers.  Owner message control there is blatantly obvious and now they are attempting to apply that meme to the alt media through economic coercion.


And the Donald is going to crack the whip.  It really is not personal either.  Every crack makes everyone else get back on their game.   All this means that things are getting done and not in a trivial manner either.  There is a lot of egos in Washington. This makes them all a lot more obedient. Expect the federal government to shed people and costs continuously for the next few years.


Those polls are as understated as the ones before the election.  Every elector is seeing things get done.  They may not agree to every detail but they also know this is inevitable.  It is the action that matters...

Can the GOP’s Shotgun Marriage Be Saved?

Wednesday morning, Nov. 9, 2016, Republicans awoke to learn they had won the lottery. Donald Trump had won the presidency by carrying Wisconsin, Michigan and Pennsylvania. All three states had gone Democratic in the last six presidential elections.

The GOP had won both houses of Congress. Party control of governorships and state legislatures rivaled the halcyon years of the 1920s.

But not everyone was jubilant. Neocons and Never-Trumpers were appalled, and as morose as they had been since the primaries produced a populist slaughter of what GOP elites had boasted was the finest class of presidential candidates in memory.

And there was this sobering fact: Hillary Clinton had won the popular vote. Her margin would rise to near three million, making this the sixth in seven presidential elections that the GOP lost the popular vote. Trump had cracked the Democrats’ “blue wall,” but a shift of 70,000 votes would have meant a third straight GOP defeat.

Seven months into the Trump presidency, the promise of a new Republican era has receded. It is not because Nancy Pelosi and Chuck Schumer have proven to be such formidable adversaries, but because the GOP coalition has gone to battle stations — against itself.

Trump has taken to disparaging Senate Leader Mitch McConnell for failing to pass health care reform, though the decisive vote to kill the bill came from John McCain, who, for his own motives and to media cheers, torpedoed McConnell’s effort and humiliated his party

And as Allan Ryskind writes in The Washington Times, McConnell is responsible for Neil Gorsuch being on the Supreme Court. Had Mitch not kept his troops in line to block a Senate vote on President Obama’s election-year nominee, Judge Merrick Garland, there would have been no vacancy for Trump to fill with Gorsuch.

McConnell is also indispensable to the Trump-GOP effort to repopulate federal appellate courts with disciples of Antonin Scalia.

What purpose is served by the coach trashing his quarterback — in midseason?

Undeniably, Congress, which the voters empowered to repeal Obamacare, reduce tax rates and rebuild America’s infrastructure, has thus far failed. And if Congress fails to produce on tax reform, the GOP will have some serious explaining to do in 2018.

As for Trump, while public approval of his performance is at record lows for a president in his first year, he has fulfilled some major commitments and has had some major achievements.

He put Gorsuch on the court. He pulled out of the Trans-Pacific Partnership and the Paris Climate Accord. He persuaded NATO allies to put up more for defense. He approved the Keystone XL and Dakota Access pipelines.

Border security is markedly better. The economic news has been excellent: Record run-ups in the stock market, near full employment, growth approaching the 3 percent he promised. The coal industry has been liberated, and the Trump folks are renegotiating NAFTA.

Yet the divisions over policy and the persona of the president are widening. Trump is disliked and disrespected by many in his own party on Capitol Hill, and much of the Republican media proudly despise him.

And that form of bribery so familiar to D.C. — trashing one’s president at the coaxing of the press, in return for plaudits to one’s “courage” and “independence” — is openly practiced.

More critically, there are disputes over policy that again seem irreconcilable.

Free-trade Republicans remain irredeemably hostile to economic nationalism, though countries like China continue to eat our lunch. In July, the U.S. trade deficit in goods was $65 billion, an annual rate of more than $780 billion.

Interventionists continue to push for confrontation with Russia in the Baltic States and Ukraine, for more U.S. troops in Syria, Iraq and Afghanistan, for scrapping the nuclear deal with Iran.

On social issues, the GOP seems split, with many willing to soft-peddle opposition to same-sex marriage and abortion and wait on a Supreme Court that ignited the culture wars to reverse course with new Trump appointees.

Even Cabinet members and Trump aides have let the media know they sharply dissent from Trump’s stand in the Charlottesville brawl. And the coming clash over statues of Confederate soldiers and statesmen is likely to split Northern and Southern Republicans.

The white working class that provided Trump’s his margins in the Middle West wonders why affirmative action, reverse discrimination at their expense, has not been abolished.

As for Speaker Paul Ryan and others committed to entitlement reform — paring back Social Security and Medicare benefits, while raising the contributions of the well-to-do to ensure the long-term solvency of the programs — they have not been heard from lately.

What seems apparent is that the historic opportunity the party had in January, to forge a coalition of conservatives and populists who might find common ground on immigration, trade, border security, spending, culture and foreign policy, is slipping away.

And the battle for the soul and future of the GOP, thought to have been suspended until 2020, is on once again.
Posted by arclein at 12:00 AM