The Establishment in PANIC; They Ditch Antifa 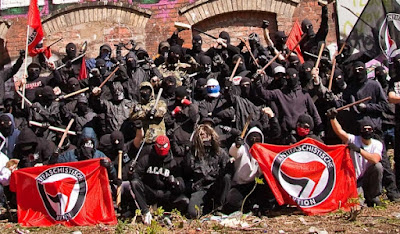 Presuming this is sustained, then perhaps the whole Antifa meme will go away.  Eventually rational people get over their hates and own disturbed thinking and wake up to what they are really doing.  Promoting and supporting a group of anarchists is plausibly the most stupid thing any power source can do.

The reason the Neo Nazis never get off the ground is financial starvation.  Thus they hang around like a homeless person outside a society ball.  Funding anarchists of the left can only blow back.


Now we have a sudden movement to redress this nonsense and it should all die down quickly.

The Establishment in PANIC; They Ditch Antifa; Massive Shift in the Last 48 Hours

The establishment has apparently just gotten word to take down Antifa, a group they were singing the praises of as recently as two weeks ago.

This is big. Only weeks ago after Charlottesville, MSM and aligned cronies were supporting Antifa against Trump's whataboutism in deflecting away from the neo-Nazis.
Even Paul Ryan wouldn't condemn Antifa. From Dailywire:
Paul Ryan Won't Call Out Antifa In Charlottesville

And neither would Elizabeth Warren:

But in the last 48 hours, the word has clearly gotten out that Antifa is worse than Trump, in the eyes of the Establishment.

The Left and MSM are now aggressively attacking Antifa, even though this switch helps Trump.
Late yesterday,

the former House Speaker Nancy Pelosi put out this statement:

“Our democracy has no room for inciting violence or endangering the public, no matter the ideology of those who commit such acts. The violent actions of people calling themselves antifa in Berkeley this weekend deserve unequivocal condemnation, and the perpetrators should be arrested and prosecuted.

“In California, as across all of our great nation, we have deep reverence for the Constitutional right to peaceful dissent and free speech. Non-violence is fundamental to that right. Let us use this sad event to reaffirm that we must never fight hate with hate, and to remember the values of peace, openness and justice that represent the best of America.”

The Wall Street Journal put out an editorial on Tuesday saying:

Antifa’s censorious criminality resembles the very political behavior it claims to fight. The mainstream left ought to denounce it as much as the right should reject white supremacists.
The Los Angeles Times wrote yesterday:

[A]s the protest [in Berkeley on Sunday]]got underway, some of those in masks would resort to mob violence, attacking a small showing of supporters of President Trump and others they accused, sometimes inaccurately, of being white supremacists or Nazis.

The graphic videos of those attacks have spurred soul-searching within the leftist activist movement in the Bay Area and beyond...

Elsewhere, the hooded group would mob, and in some cases kick and beat, a handful of far-right supporters. Several antifa members were seen using their shields to batter opponents, including one who was slammed into the back of a man running out of Martin Luther King Jr. Civic Center Park...
Among those appalled by the increasingly militant force are radicals from the 1960s peace movement.

Political scientist Jo Freeman, part of the radical student movement that forced UC Berkeley to permit political speech five decades ago, said she was dismayed at the effort that went into silencing opposition. She drew similarities between those who threatened her and other freedom marchers in the South in the 1960s, and those who bully the far right now.

On Tuesday, The Washington Post ran with this headline:

So what gives? Why is the Trump-hating MSM attacking Antifa, which only provides support for Trump's original comments on Charlottesville?

The establishment must have taken a closer look at Antifa and realized that Antifa is even more difficult to control than Trump.

Antifa is not going to play ball with the establishment. No way, no how. They are violent anarchists who do not respect any authority---any hierarchy.  Ivanka will never be allowed to whisper into their ears.

You can only have power by wielding it; you can only learn what your interests are by acting on them. When every effort to exert leverage on the world must be channeled through the mediation of representatives or translated into the protocol of institutions, we become alienated from each other and our own potential...

Every order is founded on a crime against the preceding order—the crime that dissolved it. Afterwards, the new order comes to be perceived as legitimate, as people begin to take it for granted. The founding crime of the United States of America was the rebellion against the authority of the king of England. The founding crime of the society to come, if we manage to survive this one, will do away with the laws and institutions of today.

Obviously, someone in the establishment read this and got a bit, shall we say, uneasy.

Antifa is going for the BIG takedown, They are even throwing Marxism under the bus:

Yes, authoritarian Marxists have historically played a role in the fight against fascism, but they have hardly played it honorably. They began by betraying and undermining other social movements as early as 1871. If Stalin hadn’t sabotaged anti-fascist participants in the Spanish Civil War and other movements around Europe and then concluded a pact with Hitler, the Second World War would have unfolded much differently, and it might not have taken decades afterwards for grassroots liberation movements to recover.

Both fascism and authoritarian Marxism are experiencing a small resurgence today. Much of this is taking place among people who grew up after the fall of the Berlin Wall, who are too young to have grandparents who lived through the Second World War. For many in the United States, totalitarianism is abstract, something to joke about on the internet. Some people on the Left see the hammer and sickle the way many right-wingers see the swastika: as a provocative meme rather than a blood-drenched symbol of oppression. Yet Stalin, too, carried out ethnic cleansing, as have many other authoritarian Marxist regimes.

One cannot consistently oppose fascism without opposing all forms of authoritarian government. This is not to say that rank-and-file members of authoritarian communist organizations can never be comrades in this struggle. Many of them are sincere people with the best of intentions—and clearly we need all the comrades we can get when we are facing down Nazis with guns. The point is that anti-fascists should oppose the leadership of authoritarian Marxist parties for many of the same reasons that we oppose fascists and other authoritarians. If you care about a member of an organization like the Bolshevik Party, you can express that care by making sure that his organization never comes to power—for if history is any guide, he will be the next up against the wall after you.

But don't for a minute think this puts them in the capitalist, private property camp. Here's what they say about that:

The foundation of capitalism is property rights—another social construct we inherited from kings and aristocrats. Property shifts hands more rapidly today, but the concept is the same: the idea of ownership legitimizes the use of violence to enforce artificial imbalances in access to land and resources.

A scoundrel’s worst fear is a society without property—for without it, he will only get the respect he deserves. Without money, people are valued for what they contribute to others’ lives, not for what they can bribe others to do. Without profit, every effort must be its own reward, so there is no incentive for meaningless or destructive activity. The things that really matter in life—passion, camaraderie, generosity—are available in abundance. It takes legions of police and property surveyors to impose the scarcity that traps us in this rat race.

They are against all hierarchy:

It is naïve to believe we could achieve equality in a society based on hierarchy. You can shuffle the cards, but it’s still the same deck.

The genie is out of the bottle and the establishment is in a real panic. It is unclear as to the size of the movement, certainly in the many thousands and growing--and it is closely associated with punk rock. The anarcho-punk youtube video, Big A Little A, has over a million views:

The Uber driver who picked me up yesterday mentioned she was going to a punk rock concert. I asked her if she was Antifa. She said, "Yes."

I asked her if she goes to protests and dresses in black and wears a mask. She says she goes to the protests but doesn't wear black or a mask because she doesn't want to jeopardize her studies in college. But some of her friends are masked.

She told me that she doesn't see how anyone could not be Antifa.

She is from Portland (She's been in SF only two weeks for school.) and she says there are a lot of Antifa in Portland. I asked her how they communicate. She says some is by Facebook but a lot is just on the street and you learn a lot at the concerts.

We arrived at my destination and the lefty "Destroy Everything" anarchist dropped me off there, Macy's.
Posted by arclein at 12:00 AM