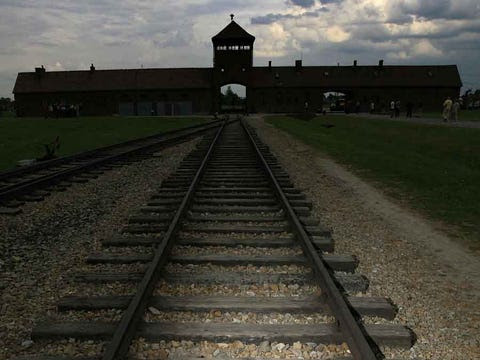 This needed to be done.  The original estimates were hardly the result of any serious scholarship but more an exercise in proxies and back of the envelope calulations. They provided a ball park and a low one at that.  Corrected calculations were always certain to be upwards.

These are awful numbers, yet similar in size to the efforts of Stalin as well.  He at least could hide behind a vastly larger population.  Within all that several millions of Jews lost their lives..

The Nazi Holocaust may have claimed up to 20 million lives, a figure far greater than previous estimates, new research has revealed.

The millions disappeared into a Nazi imprisonment and killing machine that covered a bloody swathe of Europe and appears to have been far more deadly than has been thought.

Up until now, the Holocaust is thought to have consumed between five and six million Jews, with an estimated further six million other people also murdered by the Nazi regime.

The new figures of 15 to 20 million, which have astonished some Holocaust historians, come after thirteen years of painstaking study at Washington's Holocaust Memorial Museum . Historians at the museum brought together and studied the huge amount, and often disparate, files and research on the Holocaust.

"The results of our research are shocking," Geoffrey Megargee, the director of the study, told The Independent newspaper. "We are putting together numbers that no one ever compiled before, even for camp systems that have been fairly well researched - and many of them have not been."

While Auschwitz and the Warsaw Ghetto became infamous names linked to the system of mass killing, the museum found that they were just part of a extensive network that imprisoned and obliterated millions of lives.

The research covered some 42,400 camps and ghettos across Europe, and also included forced-labour camps and Nazi "care" centres where pregnant women were forced to have an abortion or had their child killed right after giving birth. It also drew in camps, prisons and killing grounds used by Nazi puppet regimes in countries such as France and Romania.

The number of locations is almost double previous estimates made by the same institution and, all told, they may have imprisoned and killed between 15 to 20 million people.

"The numbers are so much higher than what we originally thought," Hartmut Berghoff, director of the German Historical Institute in America, said in an interview after learning of the new data. "We knew before how horrible life in the camps and ghettos was but the numbers are unbelievable.
Posted by arclein at 12:00 AM