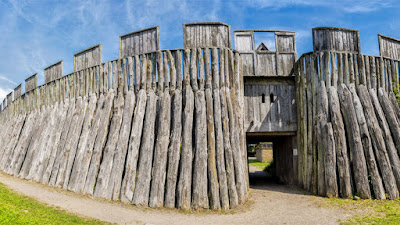 .
These timber fortresses mark the real beginning of castle building throughout the medieval world.  These existed at the time of the Norman conquest and was quickly superseded by stone keeps of which we have many examples.

What makes this design interesting and rather unique is the timber apron that is acting as bracing around the outside.  This could not work at all unless it was defended at ground level by warriors behind the timbers.  There with  two inch spacing between timbers, a warrior is fully shielded while he thrusts at any attackers or pushes fire bundles away.  The gates would protect access as well.


Thus the top would hold archers and stone throwers while the actual warriors would be at ground level chopping at attackers.  Pretty daunting even today.  With the back timbers backed by an earthen bank and the front timbers sunk six feet. you could hold of a modern assault with artillery.  Anything heavy would pass through the timbers into the earth to be smothered.  Thus a sustained bombardment would be necessary to clear this type of robust obstruction.


Not good enough though to prevent a large medieval force investing and soon enough burning the place out.  Thus the quick shift over to stone keeps and real moats.. .

When archaeologists uncovered four ancient ring-shaped fortresses in Denmark in the 1930s, the find profoundly changed the way they thought about the Vikings that built them. Rather than mindless marauders, Vikings in the Middle Ages must have been a complex, technologically advanced people to build these fortifications. Now, Danish archaeologists have described a fifth ring fortress—the first such discovery in more than 60 years—revealing even more about these architecturally gifted warriors.

The new fortress, called Borgring, was found principally using an aerial, laser-based surveillance method called LIDAR, which returns an extremely high-resolution 3D ground map. It’s located on the Danish island Zealand, south of Copenhagen. The stronghold is a perfect circle with an outer diameter of 144 meters, and has four main gates crisscrossed by wood-paved roads. The outer ramparts were built from earth and timber. Counting tree rings from its timber reveals that, like its cousins, it was built sometime in the 970s or 980s.

Though they have been excavating Borgring since 2014, archaeologists published the first comprehensive overview of their findings this month in Antiquity. Science spoke with the study’s corresponding author, Søren Michael Sindbæk, an archaeologist at Aarhus University in Denmark, about the Viking fortress’s discovery and how it helps correct the record on a misunderstood people.
This interview has been edited for brevity and clarity.


Q: How did you discover the fortress?

A: It’s a bit of a detective story. I’ve been working with these ring fortresses for quite some time, and I came to the conclusion that their distribution didn’t make sense. There were gaps in the network of known fortresses where logically another fortress should have been. I went out looking for landscape features that matched those of the fortresses we knew already, namely accessibility to land and water routes. There were only a few locations in Denmark that really fit the pattern. The Danish state has made a high-resolution LIDAR image of the whole country, so we searched that and found this very, very big feature.

Q: How did it go unseen for so long?

A: The agricultural activity around it was extremely destructive. For hundreds of years throughout the Middle Ages, peasants ploughed and leveled the field. When we came, the fortress’s ramparts were less than half a meter above the average level of the field. You could walk the field, and I might have a hard time convincing you there was anything at all, but the LIDAR image was decisive.

A: The ring is the perfect shape for a fortress. It’s the shape that encompasses the greatest area within the smallest circumference. But there’s no need to make it a perfect circle, and that’s what distinguishes the Viking Age ring fortresses in Denmark. Clearly the person who built these Viking ring fortresses—and we think that was King Harald “Bluetooth” Gormsson [who united Scandinavia, converted the Danes to Christianity and, more recently, lent his name to Bluetooth wireless technology], whose father was the first ruler of the Danish kingdom—wanted something more. All the fortresses share this strict geometry. Somebody with magnificent land-surveying skills was involved in this building work for no other reason than sheer prestige and to signal command and ability.

Q: Did the they invent the ring-shaped fortress?

A: No, they probably learned it from their own invasions in England. The people there built a network of fortifications about 100 years before our structures as a defense against the Vikings. It worked so well that the invaders could not get a foothold and had to turn back. It was a huge success for the Anglo-Saxon kings. So we believe that when ring fortresses then pop up in Denmark, it’s a copying of that strategy.

A: Most of the time, it would have been quite peaceful. They were really put there to make a statement that foreign armies shouldn’t even try. From previous fortress excavations, we know that it wasn’t just soldiers in them. There were women buried in burial grounds outside the fortress, as well as children’s graves. So presumably there was a group of people stationed there: the king’s men and their families.

Q: What have you learned about this fortress?

A: The biggest surprise is that, unlike the other fortresses that were abandoned after about 2 decades, this one appears to have been used for more than a generation after that. And we found a silver bracelet that is quite closely associated with silver rings, pendants, and other adornments that have been found at the other fortresses, so we can begin to link them together.

We also found the fortress had been attacked, and two of the gates were burned severely. We found a fantastic carpenter’s toolbox that had been left behind when it burned, with a woodworking plane, a nail iron for producing iron nails, awls, chisels, and a fragment of something called a back knife, which is another kind of plane—a little of everything.

Q: Do you know who attacked and burned it?

A: Unfortunately, no. Harald Bluetooth’s enemies, certainly. Since this fortress is located where the Baltic Sea runs against the Danish coast, the most likely people to come from that sea would be Swedish Vikings. And actually, just a few decades later, we have reports of a major battle between the Danish and the Swedes in just those waters.

Q: Why are these structures important?

A: These ring fortresses have been the biggest mystery in Viking archaeology since the 1930s. People couldn’t believe the Vikings in their own country built these structures. They thought foreign armies must have built them. But as we found more of these, we found it was indeed a Danish king and his Viking warriors, and for that reason they have been part of the most fundamental reassessment of what the Vikings were all about. They were warriors, obviously, but they were warriors out of a very organized society.
Posted by arclein at 12:00 AM