Black Man Conducts Dress-Up Experiment to Prove ‘Racism.’ Does the Opposite… 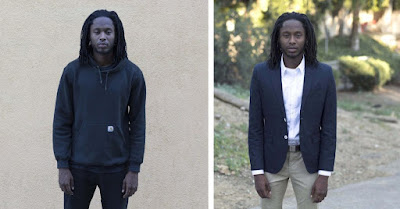 No surprise here. The first rule of successful dressage is to meet the audience's expectations. If you instead dress to express attitude then expect that in return. Worse is that racial slurs happens to be the easy way to express a negative response. Thus dressing with attitude actually solicits racism where it did not really exist.

Again this chap surprised himself by been suddenly respected. What a nice thought.

I personally dress as if ready to walk into a meeting i will control, even if no such meeting is happening or remotely planned.  It is often the planned meeting i dress down for.

Now is that so difficult?  Surely we can all learn to live as if we are a civilized society.
...
.
Black Man Conducts Dress-Up Experiment to Prove ‘Racism.’ Does the Opposite…

If you believe that today’s incessant claims of racism are blown out of proportion by the media, by #BlackLivesMatter and our dear leader Barack Obama, you’re a racist. Check your white privilege. But only if you’re white. If you’re black and you believe there’s racism everywhere, you might be this guy. He’s Pedro Fequiere, a junior staff writer at BuzzFeed. That’s your first hint. Your second hint is the title of his piece at BuzzFeed: “A Black Man Wore Different Kinds of Clothing to See if People Treated Him Differently.” If you’re not clued in yet, try this line:

Many black men dress up to avoid being seen negatively. Every day, we are dressing for survival.

Here’s the problem, Pedro. Yes, now I’m addressing you directly. Everyone dresses up to represent themselves in a certain way. Why? Because we’re all judged based on our appearances. Ask anyone who’s ever been on a promising first date. Or a job interview. Whichever you’ve had more of, think back to how you’ve dressed. Did you go wearing saggy pants? Or did you go in a suit? Point made, but I’m not stopping…

Throughout my life, I’ve experienced a collection of microaggressions — from employees following me in stores to women gripping their purses at the sight of me. At 13 years old, I was detained by the cops on suspicion of something I didn’t do.

Just the other day, a woman grabbed her child and hurried into a store to get away from me when I was walking around the block. I don’t want to be another statistic and have my appearance be the blame for it. But I won’t conform and change my appearance just to make people feel more comfortable around me. I dress myself exclusively to fit my mood, which is often “laid-back/something I can skate in” chic, or whatever. ¯\_(ツ)_/¯ I’m curious to see how much of an effect my wardrobe choices have on my life as a young black man in Los Angeles.

Seriously, Pedro, have you ever seen The People of Walmart? Those are people who don’t want to “conform and change” their appearance to make people feel more comfortable. Obviously. The disgusting (yet hilarious) results have resulted in grand mockery, to the point that I personally joke about what I wear when going to Walmart to “blend in.” It’s less couture and more hobo-chic. Or how I’d dress if I quit my job to panhandle. In other words…

Now, the experiment. Pedro dressed down and he dressed up. Guess what he found?

Thoughts while dressing up: I’ve been getting compliments from my co-workers, so I was looking forward to getting snazzy and completing my outfit with a tie. I’ve also gotten accustomed to waking up earlier and ironing my shirt and slacks.

Experiences: A neighbor, who has literally never made eye contact with me before today, smiled and said, “Good morning.” I went to Lulu’s for lunch and the owner welcomed me with a smile and led me to my usual seat. My order got messed up and I was given fruit instead of fries, but the woman waiting my table quickly fixed that.

So surprise, a 24 year old man found out that if he presented himself well, he’s treated well. Even if he’s black. Maybe I’m just an idiot, but I thought racism was just about hating someone based on their race? If the world was so racist, wouldn’t Pedro be mistreated even if he was dressed up? I’m so confused…

Look, this post could get super long, so allow me to jump to the head of the line as my white, cis-gendered privilege allows: the reason we have the expression “Don’t judge a book by its cover,” is because people judge based on appearances, specifically, how you choose to represent yourself.

Pedro, you missed the giant conclusion of your own experiment. If you dressed well, people treated you well…even as a black man in a supposedly racist world. Bonus point? You also treated yourself better. Imagine that. By dressing up well, and recieving compliments for it, you found yourself getting up earlier to prep. Not only did your style change, so did your demeanor. Since we’re on a common expressions kick, here’s another one to try on: 90 percent of our communication is nonverbal. Our tone, our body language say more about who we are than the words coming out of our mouths. By dressing to impress, Pedro, you also changed the way you comported yourself. Think that made a difference as well? And again I say, it would’ve changed a white man, woman, gay, straight, Asian, Hispanic or purple person’s demeanor as well.

Yet Pedro, you lament science…

Thoughts while dressing down: I threw on a simple hoodie with sweatpants that fit better than my previous day’s gear. I mentally prepared myself for the microaggressions I was going to experience during my morning routine while reminding myself to act as I normally would.
Experiences: I felt good walking to Lulu’s for lunch, but the hoodie-sweats combo wasn’t the best move for the warm weather. I saw the same waitress and she quickly announced my order to me before I could get a word in. On my way back to work, a valet almost ran through me and I low-key had to jump out of the way. At Meltdown Comics, I found a comic by an artist I went to school with, so I asked the employee how one can submit their work to the store. He asked me about my Tumblr account, and liked my work! That was really cool. In my experience, visual artists have always been accepting, but I especially appreciated that moment of validation.

Dude, Pedro. I feel like crap when I look like crap. They’re not microaggressions. This is why I don’t go to public places in sweatpants. NOT RACISM. If I wear my Walmart attire to Prada, TRUST ME, I’m going to get judged. Badly. Also, I have been judged when in a Prada store. Namely for the sweatpants. Lesson learned.

But what you should have learned here, Pedro, is that people aren’t as racist or sexist as you originally believed. If they were, it wouldn’t matter how you dressed. If the world is as anti-black as you think, suits and ties wouldn’t matter. David Duke doesn’t make exceptions for pleated pants.

You found the opposite. People complimented you for looking great. You liked how it felt. Guess what? We all do. It’s why the fashion industry exists. We can change people’s perception of us by how we choose to be perceived. Also known as “self-expression.” Or “personal style.” You should find more than comfort in all this, you should find empowerment. If you want people to believe you’re a successful man who’s going places, dress like it. Boom, better treatment. Regardless of race. Also I bet the ladies would like it too. Just a tip from a lady who likes men who dress well.

Yet Pedro, you missed the point. You seem bound and determined to believe you’re being “microaggressed” when you’re not looking snazzy. That says something about you which no outfit will change unless you can change your own outlook beyond your outfit. You want to be a victim. You are giving people power. You’re letting what you perceive to be microaggressions ruin your own day. That’s bullcrap, buddy. I say again: you just learned you can control how people see you. Stop whining already, take some of that power and use it.

Now excuse me, I have to put on some sweatpants so I can shop at Prada
Walmart…

Oh, and here’s that video I referenced way up at the top of this post:

Just imagine... if he had also abandoned that rasta hairstyle, he might even have found honest and profitable employment.