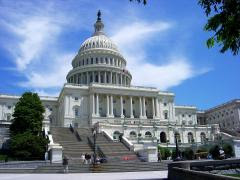 This had to happen of course. The two leaders of the GOP have been thwarting the president as much as they could and have pretty well said as much from day one.
This now allows cooperative DEMs and loyal GOPs to coalesce around an effective voting block that Trump can reliably deal with.  It also isolates the established leaders and weakens both.  I certainly think it will work to drive tax reform at least and plausibly single payer medicare.

Obama's greatest failure was to not isolate GOP's he could work with.  History shows that it is necessary to work both sides.  I recall how brilliant Reagan was at it.  Perhaps it does take a former DEM who switches to GOP.  Certainly that was Reagan and Trump as well although Trump never seriously declared until he made up his mind on the presidency...

In this discussion, Mark Thornon examines how Donald Trump's new deal with the Democrats on teh debt ceiling will help him bring the GOP into line on issues like tax reform.

As Thornton notes, the debt-ceiling deal only extends the status quo, so is not a really a big win for the Democrats. It is, however, a win for Trump because it illustrates to the GOP leadership in Congress that Trump does not need them as much as the GOP thinks he does.

This will, Thornton says, force the GOP to move forward on tax reform, which the GOP in Congress has been ignoring up until now. The details, however, don't matter that much to Trump. Thornton explains how tax reform works in Congress — special interest groups descend on Congress, handing out campaign contributions, to ensure the latest tax reforms benefit their groups. Trump, on the other hand, just wants a general lessening of the tax burden. Trump has made it clear that if the GOP is not willing to help him, Trump is willing to hand more political defeats to the GOP by working with the dems.

Ultimately, Trump may even learn to take a page from the Bill Clinton playbook and learn to pivot politically, just as Clinton did after two years of political defeats in the early 1990s.
Video of Trump stumps the GOP
The Mises Institute works to advance the Austrian School of economics and the Misesian tradition, and defends the market economy, private property, sound money, and peaceful international relations, while opposing state intervention.