Russia-Turkey-Iran Axis Would Have Been Absurd Fantasy a Year Ago. Now It's Reality 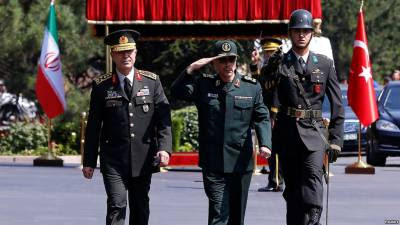 US interests in the middle East have always been ephemeral and never existential at all.  If the USA simply walked away it would sort itself out in its own good time.  Exactly that has happened here.  A border commission was always called for to sort out Russia's Southern Front and open an economic corridor to the Persian Gulf.
A similar commission needs to address Russias Western flank in order to ensure no issues.
This sudden emergence could well lead to a complete stabilization of the Iranian situation as well.. Add in that they are now working to suppress all irregulars as well and we are on the way toward a broadly sorted out Middle East with or without the USA whose vital interest in oil is about to evaporate.
.
Russia-Turkey-Iran Axis Would Have Been Absurd Fantasy a Year Ago. Now It's Reality
After Russia and Turkey, now Iran and Turkey are smoothing things over as well


The geopolitics of the Middle East is witnessing a tectonic shift with the emergence of a Turkish-Iranian axis that would have seemed unbelievable until recently. The 3-day visit by Iran’s chief of general staff General Mohammad Hossein Bagheri to Turkey last week was the first such event in Iran-Turkey relations since the Iranian Revolution in 1979. During Bagheri’s visit, the two countries signed a military agreement on August 17. Turkish President Recep Erdogan disclosed on Monday that he held discussions with Bagheri on possible joint Turkish-Iranian military actions against Kurdish militants.

“Joint action against terrorist groups that have become a threat is always on the agenda. This issue has been discussed between the two military chiefs, and I discussed (with Bagheri) more broadly how this should be carried out,” Erdogan said. Turkey and Iran have strong convergence in preventing the emergence of an independent Kurdish entity in the region in Iraq or Syria. Both countries are battling Kurdish separatist groups within their own borders.

What lends urgency for the two countries to cooperate is their shared suspicion that the US and Israel are possibly stepping up their longstanding project to establish an independent Kurdistan in the region, with an ulterior agenda to create for the long-term an exclusive preserve for pushing their interests on the regional map. The US has refused to pay heed to Turkey’s concerns and has armed and equipped the Kurdish militants in northern Syria. The US Special Forces and Kurdish militia are jointly conducting the on-going offensive on Raqqa, which used to be the capital of the ISIS. Washington spurned a Turkish offer to undertake the operations on Raqqa, an Arab Sunni region, and instead preferred the non-Arab Kurdish militia as its ally.

The US objective seems to be to seize control of the oil fields in the region adjacent to Raqqa, which would ensure the economic viability of a Kurdistan entity in northern Syria. Turkey fears that the next step by the US would be to launch operations in northern Syria along Turkey’s borders with a view to carve out a contiguous Kurdistan, which would have access to the Eastern Mediterranean. Turkey rightly apprehends that a Kurdistan as next-door neighbour would put intolerable strain on its integrity and stability.


What has given a sense of urgency to Ankara and Tehran to join hands is the referendum that is being planned by the Iraqi Kurds on September 25 regarding the creation of an independent Kurdistan state. Kurds make up about one-fifth of Iraq’s population and the result of the forthcoming referendum – if it is held – is a foregone conclusion. However, the emergent Turkish-Iranian axis has a much bigger backdrop. For a start, implicit in it is a hint by Turkey that it is conclusively ending its support for the Syrian rebel groups. Turkey and Iran have been working together on the Russian initiative to create de-escalation zones in Syria. Again, Russia has been steadily strengthening its bilateral cooperation with Turkey and Iran respectively in the recent years. Thus, the Turkish-Iranian military cooperation is crystallising under an overarching Russian umbrella, so to speak, that aims at the stabilization of the Syrian situation. In effect, therefore, one could say that a Russian-Turkish-Iranian triangle is in the making to end the Syrian conflict and bring about a Syrian settlement.

This has far-reaching implications because the Russian-Turkish-Iranian triangle is also showing signs of spreading its wings beyond the Syrian problem to encompass a broad-based regional cooperation that has potential to impact the power dynamic in the Middle East as a whole. Thus, a week ago, Russian, Turkish and Iranian companies signed a $7 billion deal to drill for oil in Iran. Similarly, after much delay, Iran and Russia are moving toward the implementation of their swap arrangement whereby Iran is expected to supply from next month 100000 barrels of oil per day to Russia and in return Russia will be exporting to Iran goods worth $45 billion annually. On the other hand, Russian-Turkish economic cooperation is expanding rapidly. Indeed, the finalization of the $2 billion deal last month for acquiring the S-400 Triumf anti-ballistic missile system from Russia signifies a strategic shift in Turkish foreign policy, Turkey being a NATO power and an ally of the US.

Historically, the relations between Russia, Turkey and Iran have been volatile. There have been long periods in history when they were rivals. But then, the contemporary setting has certain unique characteristics that bring about congruence. Of course, they enjoy complementarity in economic cooperation, given their respective resource base, stage of development and market conditions. All three powers are having tense relations with the US. All three have common interest in countering the western hegemony over Muslim Middle East. At the same time, they are also resurgent powers, each its own way. They realise that they are stakeholders in regional security and stability and it is in their self-interest to cooperate rather than compete with each other in the Middle East, as the Syrian experience testifies.

It will be a “win-win” situation if their entente is carried forward, which also eases their regional isolation. It is a big ‘if’, no doubt, but at a time when the Middle East is in great turmoil — three great bastions of ‘Arabism’ (Iraq, Syria and Egypt) greatly weakened; Saudi Arabia in dangerous drift; GCC inexorably unraveling — the axis between Russia, Turkey and Iran holds potential to act as an anchor sheet of regional stability. It will be a “win-win” situation for all three if they can keep up the momentum of their entente, which also eases their regional isolation.
Posted by arclein at 12:00 AM