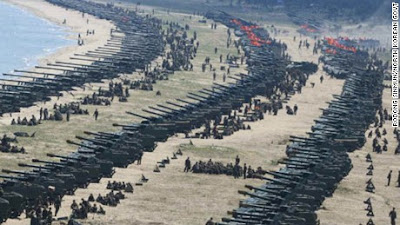 I do want to say that what i am seeing from the Trump administration is extraordinary good news.  Bad trends are been interrupted.  Not defeated yet, but no longer been ignored.  These are all issues easily identified by the discerning and are best dealt with early or in rare cases best dealt with late.


Trump's great fortune is that the whole nuclear weapon system happens to be totally obsolete and no one understands that yet.  It is obvious to me that they will soon particularly if the USA  uses Korea to unleash the Space Fleet which commands Kinetic Bombardment weapons, Super Lasers and Small Tactical Nukes as well.


Recall that the USA has done little to advance the known systems in place and that is because there is little point except to keep potential enemys confused and deeply in the dark.  Hell, we still fly the B- 52s for an attack platform when air superiority is assured.


Conrad here spells out the likely preemptive attack expected by any body.  For that conventional attack to properly go ahead we need assurance that the artillery threat can be completely and almost instantly neutralized.  Doing that is a task for the US Space Bombardment Fleet with their rapid fire lasers.  Thus i expect plenty of smoke to hide this as occurred in Iraq during the first Gulf War.

I further expect a Trump doctrine in which all nuclear powers will be aggressively disarmed and will also lead to the full decommissioning of uranium based power systems as well.  It is likely to be deliberately evolved over the next few years.

This week I have been having a lively discussion with my very distinguished friend of many years, John Polanyi, winner of a Nobel Prize for chemistry in 1986, one of Canada’s most respected and sociable academics, and a frequent commentator on arms control and nuclear proliferation issues, about current scenarios with North Korea. This arose when I was invited to give a brief talk to a small dinner group where John and I are both members, that meets from time to time at one of the colleges of the University of Toronto. I responded to John’s question that I thought the most likely outcome of the present impasse was that North Korea, having successfully cheated three consecutive American administrations and got to the threshold of having a deliverable nuclear weapon, would stonewall to the end, and either call what they might consider to be America’s bluff, on past form, or try to slide into an Iran-like arrangement: a nuclear military capability on the instalment plan. And I thought that this U.S. administration was not bluffing and that President Trump made it clear on Tuesday at the United Nations that the U.S. would not make another Iran-style agreement, would not allow the existing agreement with that country to enable Iran to become a nuclear military power, and would not tolerate North Korea becoming one either.

A discussion involving some other interveners followed in which Polanyi made the point that each new nuclear military power after the United States — the U.S.S.R., the U.K., France, China, Israel, India, Pakistan and South Africa (which renounced nuclear weapons after the accession to government of Nelson Mandela and the African National Congress) — was simply admitted to the slowly expanding group of nuclear powers, and all have proved responsible in nuclear military matters. He focused on Stalin and Mao Tse-tung as illustrative of people who were egomaniacal, belligerent totalitarians, yet had not misused nuclear military capability. Stalin was, in fact, quite cautious about going to war, and only initiated hostilities in one limited (though outrageous) incursion in Finland when most of the rest of Europe was already at war in 1939. Chou En-lai confirmed to Richard Nixon in 1972 that Stalin had not lifted a finger to help China in the Korean War. And Mao made absurd comments about China’s immense population enabling it to endure a nuclear war before China had such a military capability, but not afterward. I thought Pakistan, given its political instability and patronage of some terrorist groups, was a greater danger, but so far, so good.

My view is that the entire non-proliferation regime has been a fraud from the start. The nuclear genie can never be put back in the bottle, and the pledge of the nuclear powers to attempt to negotiate nuclear disarmament between themselves while discouraging other countries from becoming nuclear powers is essentially hypocrisy. They have not disarmed, can not, and it is not desirable that they do, because if they did the whole world would be subject to blackmail from any irresponsible despot who applied the well-known and accessible knowledge of how to assemble and deliver a nuclear weapon. In this one point, the mad theocrats of Tehran are correct: the nuclear non-proliferation regime is just a club of states monopolizing the power and influence of a nuclear arsenal, while piously scolding other countries to abjure nuclear weapons.

Polanyi’s argument is that it is only a club and we must simply resign ourselves to the fact that any country which wishes to pay the costs of joining can do so, no matter how odious and belligerent the regime of that country is. The regulations of this club up to now have been an utter mockery; it alters Groucho Marx’s famous assertion that he would not be a member of any club that would have him as a member, to seeking membership in a club that has no rules of admission.

When Ukraine pledged to give up the nuclear weapons it inherited when the Soviet Union disintegrated (although the control of the missiles had remained in Russia), its security was effectively guaranteed by Russia, the United Kingdom, and the United States at Budapest on Dec. 5, 1994, and by China and France shortly after. When the Western guarantors suggested Russia violated that agreement when it seized the Crimea in 2014, Russia claimed that Crimea had seceded from Ukraine, and had not been seized, as demonstrated by the spurious referendum that Russia conducted in Crimea. Canada’s Stephen Harper played an admirable role in suspending Russia from what had become the G8, because of Russia’s treatment of Ukraine. The British and French agreed that the Budapest guaranty of Ukraine’s security had been violated by Russia, but the Obama administration waffled. Whether it was or not (and of course it was), the assurances given Ukraine by the so-called Great Powers proved worthless.

When India and Pakistan developed and deployed nuclear weapons (although India described this capability as “peaceful”) in the 1990s, President Bill Clinton imposed sanctions on both powers, which were unjust in themselves, almost universally ignored, and totally ineffectual. They were withdrawn by President George W. Bush, when he found common ground with India against Islamic extremists, and needed Pakistani assistance in Afghanistan.

Iran has forced the issue of self-admission to the nuclear club and despite frequent and strenuous admonitions from President Barack Obama and Secretary of State Hillary Clinton that the U.S. would impose “crippling sanctions” and contemplate the use of force, Obama folded like a three-dollar suitcase, taking the British, French, Germans, Russians and Chinese with him, and gave Iran the nuclear green light if they wait 10 years. This will be verified by a porous inspection system that in fact enables Iran to take the step across the threshold of the club anytime it chooses.

The gallery of hand-wringing, fear-mongering idiots who impute a lust for imbecilic violence to President Trump at each opportunity, such as the (mercifully now almost bankrupt British) Guardian and BBC, thought Trump was threatening Iran with war at the United Nations on Tuesday. His domestic critics (and the Canadian media for all they count in this) claimed to believe Trump was also threatening to kill the entire population of North Korea. With such irresponsible, hopeless media, it is little wonder how misinformed public opinion is. The “destruction of North Korea” was only foreseen by Trump if that country provoked a general war.

I told Polanyi and our fellow diners, and we continued the exchange by email, that I thought Trump would re-establish the club, but with rules that exclude those who sought to enter it while threatening to use nuclear weapons against other countries: Israel in the case of Iran and Japan and the United States in the case of North Korea.

Since Polanyi asked me, I expressed my belief that Trump will destroy North Korea’s artillery batteries directed at Seoul, the immense capital of South Korea, and all aspects of its nuclear program, by a pre-emptive conventional strike of air, sea and ground-launched missiles and large precision bombs. He will probably certify Iranian compliance with Obama’s contemptible delayed nuclear enabling agreement, but advise Iran that the United States will not tolerate Iran’s continued intervention in Syria, Lebanon, Gaza, Iraq and Yemen. And he will likely gradually turn up the heat on those infiltrations and threaten the military option against Iran’s nuclear program, with the support of almost all of the Arab world, and the quiescence of Russia and Turkey, which will be invited to replace Iran, with Egypt and Saudi Arabia, as the chief Muslim power in the Middle East.

If my expectations are mistaken, in 20 years there will be 30 or 40 nuclear military powers in the world, a diffusion of nuclear danger only partially mitigated by anti-missile defences provided by the United States, the only country which is sophisticated enough to do so, protecting that country and its allies.

Canadians should rise above the obtuseness of most of the available media and hope that the U.S. government does just this. If it does not, the semi-manageable nuclear club we have known will before long become a nuclear-weaponized playpen infested by terminally dangerous psychopaths.
Posted by arclein at 12:00 AM