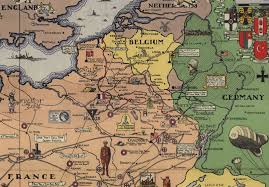 This is something i had never properly understood.   The public reasons were always bunkum.  The actual consequences for the British Empire were unforgivable.  The road to war itself was mostly driven by Russian mischief making taking full advantage of French enthusiasm to redress 1871, in order to extend Russian interests in Europe and the Balkans.

The German posture was purely defensive even though this ultimately meant preemptive action.

In the end, the British handled their hand badly and did not forestall the rush to war at the least as was surely possible through strong diplomatic engagement in the prewar years. It was always in their interest to keep the peace and do this by withholding military support from France if they did not play ball.

An obvious strategic deployment would have been to place British land forces in Belgian to act as a staging force to move to support an attacked all.  They had the guarantees without means to even assist.  This would have completely nullified the sweep through Belgian used by the Germans and possibly reduced the WWI war to demonstrations on the main frontier with France....

Cameron Greene, History is eternal and perpetual, there are no rules.

Ah the Perfidious Albion, always acting for pragmatic self-interest, there was only one reason she went to war: Ports, specifically those of Antwerp, Ostende, Nieuport, Dunkirk, and Calais.

In order to understand the predicament of Great Britain in the run-up to the Great War, one must study her international posturing when dealing with the Napoleonic Wars.

This became a dangerous affair as not only were alliances susceptible to the most minute change of events but the lack of check on Napoleon’s aggression consistently put Britain in the face of great peril time and again. This lackadaisical effort to stave off foreign threats to her shores did not go unnoticed and by the end of Napoleon himself, Britain began adjusting her foreign policy to prevent such a similar situation from appearing again in the future.

To ensure the continued security of the Isles, a forward thinking Prime Minister by the name of Henry John Temple or more colloquially, Lord Palmerston, opportunistically took advantage of the London Conference of 1830 which was called to address the future of William I of the Netherlands who had been installed to the throne of the Netherlands shortly after the fall of Napoleon to rectify this constant problem.

A solution was found in the creation of an independent Belgium.

During the rise of Napoleon and his reign as the Emperor of France, Great Britain was left in a precarious position of being the commander of the seas but the subordinate of land. France had unrivalled control over the continent which forced Britain time and again to seek allies with whom the fight could be taken to Napoleon himself while Britain maintained the seas for her own posterity.

Belgium itself had always been the crossroads of Europe from West to East since the days of Caesar when he fought the Belgae. It was in Belgium that Charles the Bold of Burgundy and Louis XI of France engaged in their historic and extensive rivalry, where Spain had annihilated much of the Low Countries, where Napoleon had met his fate with Wellington at Waterloo, Belgium was the battleground crossroads for all.

By creating an independant and furiously so Belgium, Palmerston had effectively cut-off the avenue of overland movement for armies throughout the continent while simultaneously guaranteeing that the port of Antwerp as well as several others located in close proximity to Britain were controlled by a nation that held a symbolic debt to Britain herself. Palmerston would put a bow on the whole thing by strong-arming the other Great Powers in Russia, German Confederation, France, Austria, and the Netherlands to sign the 1839 Treaty of London which guaranteed Belgium’s neutrality by force of arms.

Palmerston had effectively created a steel door between France and Germany and locked it with a guarantee of immediate war if one of them should ever try and break through.

This was a fully-fleshed idea and quite a sound one at that, Palmerston simply didn’t take into account one thing: strategic necessity.

Germany had long prepared for the possibility that she would have friends few and far between in the event of conflict on the continent and that she would most likely be fighting a juggernaut of the East and a veteran in the West in a two-front war.

With trademark German industriousness and knack for cold calculation, the Imperial General Staff mapped out a variety of scenarios that conformed to these expectations and plans to match them.

Looking to the prestigious Chief of the General Staff in Alfred von Schlieffen, the Imperial Staff surmised that a swing around the joint border of France and Germany into neutral Belgium would have the best possible chance of successfully enveloping France’s military strength along the border itself.

Belgium itself was relatively flat and had far less in terms of fortress and defensive power, a fast enough offensive through the country would allow the Imperial German Army to overwhelm the northern border of France and envelope much of her military power in the fortress region itself, essentially hanging France with her own rope.

The Port of Antwerp was particularly vital, sitting just 229 kilometers from the coasts of Britain herself. The importance of the port itself cannot be overstated as the neutrality of Denmark and the Netherlands made Antwerp the closest accessible port available to Germany short of breaching into France and taking the coast. Such was the nature of importance around Antwerp that the First Lord of the Admiralty himself, Winston Churchill, personally travelled to Antwerp to assume command of the defence and even ordered reinforcements into the city to prolong the siege.

The Port of Ostend would be another sore spot as well with Admiral Jellicoe of the Grand Fleet have a particularly worry about the use of U-Boats and torpedo boats out of the ports itself and the possibility of a cross-Channel invasion from her. This worry was transmitted to General Haig who became cemented in his decision for a new offensive in Flanders with the news, leading to the Battle of the Passchendaele to remove Ostend as a liability.

The Battle of the Passchendaele was planned in response to the growing threat of the German U-boat program and aimed at capturing the Belgian north-east coast. General Haig had been in favor of an offensive in Flanders for sometime and finally got his wish when Admiral Jellicoe let himself be known in his worries about the Belgian ports but the battle was far from what was hoped. British and Empire forces advanced only five miles yet suffered at least a quarter of a million casualties and Haig was consistently asked to halt the offensive yet pushed on anyway. The battle remains controversial to this day in what it actually accomplished.

No pause was given to the idea that Great Britain would enter the conflict if Germany was to violate the Treaty of London as ‘strategic necessity’ dictated the need to push through Belgium, Luxembourg, and the Netherlands despite their declared neutrality.

When Germany did invade Belgium, she wasn’t in the warmest of graces with her diplomatically and her aggressive movements towards France, despite their historical foundations, were received with a bitter taste by Sir Edward Grey and much of the Liberal Government.

As a result of this diplomatic faux-pas on the part of Wilhelm II and the German diplomatic corp in failing to actually build a foundational relationship pre-war, Britain was left with little in terms of guidance with how to best address Germany or what her intentions even were if she actually won the war.

Britain was operating against an opponent she that had no historic precedent of unified direction, it was diplomatic Russian roulette to even deal with Germany.

If she chose to remain neutral and Germany lost, Britain would have effectively destroyed much of her diplomatic relations with her fellow European nations.

If she chose to remain neutral and Germany won, Britain would be left without allies and in a state of déjà vus reminiscent of the days of Napoleon, alone against a united front from Europe.

There was very little choice, either strategically or diplomatically, in deciding to enter the war, Germany could not be allowed to dramatically shift the established balance of power nor possess any ports near the English coast itself with the level of diplomatic hostility she had displayed for decades.

If Germany dominated the Continent it would be disagreeable to us as well as to others, for we should be isolated.

Great Britain could not afford to be left alone as she had been with Napoleon, the lessons were too harsh and too historic to be forgotten.