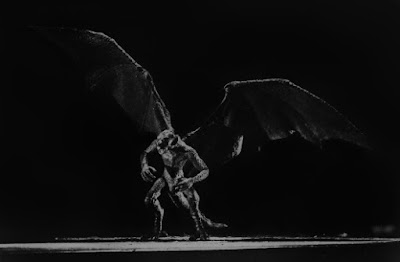 One more brush stroke.  The gargoyles have woken up to the reality that a lot of their prey has made its way into our cities and they have simply followed.  Just like the coyotes and even the cougars.

All this means that the Chicago area is now getting a bundle of sightings and perhaps we will even capture a sample.

This pretty well confirms that we are dealing with a wild animal and nothing else.
.


Bronx, New York on Andrews Ave: "I had recently come back from a motorcycle ride at night when I heard a loud dog yelp. I was walking from the driveway from locking up my Suzuki. I saw a dark shadow with large wings human in the air and a Doberman Pinscher running from it. I first thought the dog was going for me I jumped in the garden where it was gated 4 feet then I scratched up my motorcycle helmet and hurt my left leg from doing that. The Doberman wasn't going for me it was running for its life. I then heard a flapping wind noise over and over. It grabbed the dog near the tree. I could see it had long nails. The dog was fully grown. I prayed to God quickly & closed my eyes while still in the garden. It was gone I heard more flapping of wings. I got out from the garden to see blood by the tree. I am almost 50 years old now. I thought it to go away. I carry now multiple tactical knives from cold steel. Whatever it was it was hungry.”
Posted by arclein at 12:00 AM

This is interesting. I look for earlyreports often inspired by unknown reports long before the internet allowed witness posting. This film was done in 1972, long before mothman reports or the chupacabra.