Mary and Islam With Sheen 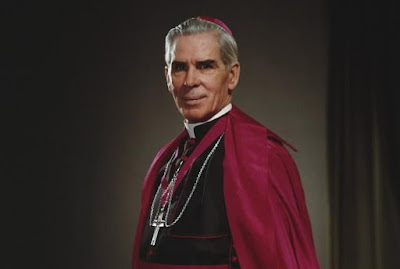 This is an extraordinary insight.  That Mary is the path toward Islamic conversion to Christ.  It is plausibly the path for all.  Yet accepting that it is important to Islam and possibly more important than Mohammad himself is an astounding idea.

Not knowing this means a major flaw in understanding Islam.  Islam is a stepping stone to Christianity and not the other way around.  That this has been abused is also true.  Praying for the intercession of Mary is a direct step to accepting Christ.  As Muslims do pray, they do meditate and they do ask for the intercession of Mary it is inevitable that they devote themselves to Christ as well.

If we all accept Allah and God and all other names for GOD to merely denote the SOURCE, we have no conflict.


What a noted religious leader said about Islam in 1952


Throughout the 1950s, the most famous and powerful religious voice in mass media was the eloquent and telegenic Catholic bishop, Fulton J. Sheen. The author of several books, not only about his Catholic faith but also about issues such as communism, Sheen had an influence that was broadcast to millions on television as a pioneer of mass media, long before Billy Graham, Jimmy Swaggart, or Joel Osteen.

In an article that seems prescient, Fulton speaks of the animosity Islam has and has had towards Christianity on the whole and the West in particular. He recalls the many times that Muslim armies came close to overwhelming the West: in France, Austria, and Spain. Each time, there were reputed miracles that held back the armies of Islam that were poised to wrest control of the West from its Judeo-Christian and philosophical roots.

The following was written by Bishop Fulton J. Sheen:

The Power of Islam

Misunderstanding the notion of the Trinity, Mohammed made Christ a prophet, announcing Him just as to Christians Isaiah and John the Baptist are prophets announcing Christ.

The Christian European West barely escaped destruction at the hands of the Moslems. At one point they were stopped near Tours and at another point, later on in time, outside the gates of Vienna. The Church throughout northern Africa ws practically destroyed by Moslem power, and at the present hour, the Moslems are beginning to rise again. If Moslemism is a heresy, as Hilaire Belloc believes it to be, it is the only heresy that has never declined. Others have had a moment of vigor, then gone into doctrinal decay at the death of the leader, and finally evaporated in a vague social movement. Moslemism, on the contrary, has only had its first phase. There was never a time in which it declined, either in numbers, or in the devotion of its followers.


The missionary effort of the Church toward this group has been at least on the surface, a failure, for the Moslems are so far almost unconvertible. The reason is that for a follower of Mohammed to become a Christian is much like a Christian becoming a Jew. The Moslems believe that they have the final and definitive revelation of God to the world and that Christ was only a prophet announcing Mohammed, the last of Gods real prophets.


At the present time, the hatred of the Moslem countries against the West is becoming a hatred against Christianity itself. Although the statesmen have not yet taken it into account, there is still grave danger that the temporal power of Islam may return and, with it, the menace that it may shake off a West which has ceased to be Christian, and affirm itself as a great anti-Christian world power. Moslem writers say, When the locust swarms darken countries, they bear on their wings these Arabic words: We are Gods host, each of us has ninety-nine eggs, and if we had a hundred, we should lay waste the world, with all that is in it.


The problem is, how shall we prevent the hatching of the hundredth egg? It is our firm belief that the fears some entertain concerning the Moslems are not to be realized, but that Moslemism, instead, will eventually be converted to Christianity – and in a way that even some of our missionaries never suspect. It is our belief that this will happen not through the direct teachings of Christianity, but through a summoning of the Moslems to a veneration of the Mother of God. This is the line of argument:


The Koran, which is the Bible of the Moslems, has many passages concerning the Blessed Virgin. First of all, the Koran believes in her Immaculate Conception, and also, in her Virgin Birth. The third chapter of the Koran places the history of Marys family in a genealogy which goes back through Abraham, Noah, and Adam. When one compares the Korans description of the birth of Mary with the apocryphal Gospel of the birth of Mary, one is tempted to believe tht Mohammed very much depended upon the latter. Both books describe the old age and the definite sterility of the mother of Mary. When, however, she conceives, the mother of Mary is made to say in the Koran: O Lord, I vow and I consecrate to you what is already within me. Accept it from me.


When Mary is born, the mother says: And I consecrate her with all of her posterity under thy protection, O Lord, against Satan! The Koran passes over Joseph in the life of Mary, but the Moslem tradition knows his name and has some familiarity with him. In this tradition, Joseph is made to speak to Mary, who is a virgin. As he inquired how she conceived Jesus without a father, Mary answered: Do you not know that God, when He created the wheat had no need of seed, and that God by His power made the trees grow without the help of rain? All that God had to do was to say, So be it, and it was done. The Koran has also verses on the Annunciation, Visitation, and Nativity. Angels are pictured as accompanying the Blessed Mother and saying: Oh Mary, God has chosen you and purified you, and elected you above all the women of the earth.


In the nineteenth chapter of the Koran there are 41 verses on Jesus and Mary. There is such a strong defense of the virginity of Mary here that the Koran, in the fourth book, attributed the condemnation of the Jews to their monstrous calumny against the Virgin Mary.

The Significance of Fatima


Mary, then, is for the Moslems the true Sayyida, or Lady. The only possible serious rival to her in their creed would be Fatima, the daughter of Mohammed himself. But after the death of Fatima, Mohammed wrote: Thou shalt be the most blessed of all the women in Paradise, after Mary. In a variant of the text, Fatima is made to say, I surpass all the women, except Mary.


This brings us to our second point: namely, why the Blessed Mother, in the 20th century, should have revealed herself in the significant little village of Fatima, so that to all future generations she would be known as Our Lady of Fatima. Since nothing ever happens out of Heaven except with a finesse of all details, I believe that the Blessed Virgin chose to be known as Our Lady of Fatima as a pledge and a sign of hope to the Moslem people, and as an assurance that they, who show her so much respect, will one day accept her divine Son too. Evidence to support these views is found in the historical fact that the Moslems occupied Portugal for centuries. At the time when they were finally driven out, the last Moslem chief had a beautiful daughter by the name of Fatima. A Catholic boy fell in love with her, and for him she not only stayed behind when the Moslems left, but even embraced the Faith. The young husband was so much in love with her that he changed the name of the town where he live to Fatima. Thus, the very place where our Lady appeared in 1917 bears a historical connection to Fatima, the daughter of Mohammed.


The final evidence of the relationship of Fatima to the Moslems is the enthusiastic reception which the Moslems in Africa and India and elsewhere gave to the Pilgrim statue of Our Lady of Fatima, as mentioned earlier. Moslems attended the church services in honor of our Lady, they allowed religious processions and even prayers before their mosques; and in Mozambique the Moslems who were unconverted, began to be Christian as soon as the statue of Our Lady of Fatima was erected.


Missionaries in the future will, more and more, see that their apostolate among the Moslems will be successful in the measure that they preach Our Lady of Fatima. Mary is the advent of Christ, bringing Christ to the people before Christ Himself is born. In an apologetic endeavor, it is always best to start with that which people already accept. Because the Moslems have a devotion to Mary, our missionaries should be satisfied merely to expand and to develop that devotion, with the full realization that Our Blessed Lady will carry the Moslems the rest of the way to her divine Son. She is forever a traitor, in the sense that she will not accept any devotion for herself, but will always bring anyone who is devoted to her to her divine Son. As those who lose devotion to her lose belief in the divinity of Christ, so those who intensify devotion to her gradually acquire that belief.


Many of our great missionaries in Africa have already broken down the bitter hatred and prejudices of the Moslems against the Christians through their acts of charity, their schools and hospitals. It now remains to use another approach, namely, that of taking the 41st chapter of the Koran and showing them that it was taken out of the Gospel of Luke, that Mary could not be, even in their own eyes, the most blessed of all the women of Heaven if she had not also borne the Savior of the world. If Judith and Esther of the Old Testament were pre-figures of Mary, then it may very well be that Fatima herself was a post-figure of Mary! The Moslems should be prepared to acknowledge that, if Fatima must give way in honor to the Blessed Mother, it is because she is different from all the other mothers of the world and that without Christ she would be nothing.
Posted by arclein at 12:00 AM