Why Do People Perform Ritual? It's an Excellent Method of Self-Improvement 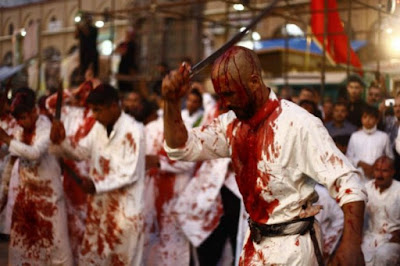 .The human reality is that we interact with our world through a remarkable collection of habits learned beginning in childhood.  Altering those habits actually entails developing new habits to over write those other habits wherever possible.  That is not easy.  However, meditation will actually do it and most rituals are  often carefully chosen habits that help as well.  It is just that they become obvious as rituals.

This item discusses it much further and it is worth contemplating.

The take home for all of us is to understand what is ritual and to ask if they can be improved at least.  My own experience has been that meditation has led me to control to some degree what rituals i wished to use or quit.  That is all part of been self aware.

Why Do People Perform Ritual? It's an Excellent Method of Self-Improvement

Doing ritual, whether it's a religious ceremony or a simple greeting on the street, is a powerful way to break bad habits and improve our lives, says Harvard historian Michael Puett.

Michael Puett: A lot of our philosophers have what would seem to us a very counterintuitive idea of how to break patterns. Among the key things they will say are rituals. Now we often find rituals to be a bad thing. Some of them are okay, you know, prayer ritual presumably is a nice thing and a family get together on a holiday. But the idea of doing lots of rituals over the course of the day strikes us as archaic. It’s things that traditional people used to have to do. And we tend to think it’s good for us that we don’t have to do it because if we’re going to be sincere and true and authentic to ourselves we don’t want rituals that tell us what to do. Well again let’s suppose for a second that perhaps our philosophers are on to something. That we are just these patterned creatures and these patterns are potentially very dangerous. So how do we break them? That’s why you do rituals. What rituals do is they force you for a brief moment to become a different person and interact with those around you in a different way. So for that brief moment suddenly you’re no longer repeating the same old patterns, you’re doing something else and what they argued was it’s that break that really matters. Let me give you an absurdly mundane example. Typical of one in America is we see someone that we sort of know and we say, you know, we’re going through the usual day, our anxieties, fears, angers, blah, blah, blah are typical patterns in this language.

And then we see someone and we say oh hey, how’s it going? And the other person goes oh pretty good. How are you? And we say oh yeah, I’m pretty good too and then we walk off. Now if you think about it you might think well it’s sort of silly that we do that because that’s inauthentic. I’m actually not feeling pretty good right then. But if you think of it as a ritual it’s actually a very good thing to do and we should even do it more fully. Because then what you’re doing is you’re breaking out of that standard set of patterns of the ways you’re going about the day. For that brief moment and I’ll use their language you enter a ritual space. You’re connecting with someone. Things are going well. You’re connecting with this person perfectly. It breaks you out of those patterns. And then if you’re doing that sort of thing, these little seemingly meaningless rituals over the course of a day consistently you’re breaking yourself out of these little patterns and opening up other possibilities. And they would argue that is why ritual matters. It breaks us out of patterns. We enter it to it as a space. We act as if we are a different person with a different set of emotions interacting with those around us in a different way and that is, over time, how you break these patterns.

So this may seem somewhat odd if we’re entering into a ritual which of course gives us different patterns of interaction. How is that actually going to improve the fact that we are doing other patterns outside of it. Well here’s there full argument. If we are going throughout our days they would argue simply repeating these same patterns – interacting with people based on our same standard responses, our same standard habits. What ritual will do is break those patterns. They will give you new patterns but the argument they would make is it’s not that the ritual patterns are the right one. It’s the break they care about. Now let’s go back to the greeting example. I see someone. Oh things are fine. I connect for that brief moment. Then of course that person passes and I return to my usual patterns. In their language I return – I leave the ritual space. But the point is you keep going back. In other words you keep doing these little rituals over and over again. The way you greet someone. The way you shift a language if you’re talking to someone. And it’s those little breaks, those little shifts that make a difference over the course of a day. Then where would that take you? Well where it takes you they would argue is over time you begin to get a sense of the ways that little things you do are affecting others. That these patterns we’re playing out or bringing out certain responses in those around us and you begin to gain the power to alter those.

So you have a standard argument that one always has with one’s partner. And that person says something. It makes me angry. That makes that person angry and we go through the same thing. We know this so well. So all you do is if you take these ideas seriously begin to slightly shift that, begin to slightly shift the standard pattern you fall into. And even if there’s not a set ritual that gives you the ability to do so you gain the same thing by simply doing a little break. So you hold your body slightly differently, use a slightly different tone of voice. You bring in something other than you would normally bring in. And you’ll notice immediately a slight shift in the other person too. And then you keep doing that. And over time, and it takes a while but over time you’ll see that this same standard pattern that you unconsciously are falling into with those around you begins to shift. And that’s what they care about. The rituals create the breaks. Over time this shifts how we are interacting in the world. And then over time what you gain is the ability to sort of work with these rituals or work with these patterns such that you are no longer simply repeating them. You’re able to shift them and alter them according to the circumstances. And they would say that’s how over time you learn how to build better interactions, how to build better relationships. Really and they’ll use strong language here how to create very different worlds because you’re acting in such different ways that you bring out very different responses from those around you.
Posted by arclein at 12:00 AM