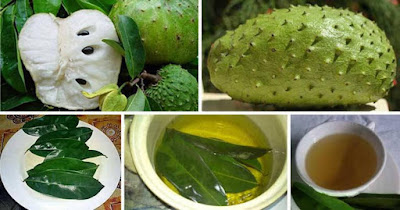 Take several leaves, dry or fresh and a liter of water.  Bring to a boil and reduce to one cup of fluid.  You are in business. As much as twice a day is suggested.Otherwise this tea is effective for other ailments as well and since it helps gout it is likely an excellent internal restorative.

It is a medicine.   It is suggested that you use it for a thirty day cycle and then rest your body to recover from its effects.  Again experiment if you use this and be careful.

Soursop fruit and dried leaves need to be readily available for a wide range of conditions including cancer.
.

The leaf of the Peruvian Graviola tree was discovered nearly 25 years ago as a wonderful way to prohibit abnormal cell division – in other words, cancer – and similar diseases of metastasizing, unhealthy cells. Graviola contains cytotoxic compounds that destroy cancer cells with ‘lethal precision’ while leaving healthy cells unharmed. By seeking out cells higher in the production of ATP, this tree’s natural compounds are able to kill cancer cells and leave healthy ones alone.

Graviola has been tested widely in over 20 labs since the 1970’s, but many of the results have not been published (or released to the public, more likely). But the National Cancer Institute confirms that the tree’s active compounds attack and destroy cancer cells exceptionally well. It has been shown to be effective in treating malignant cells in 12 different types of cancer, including colon, breast, prostate, lung, and pancreatic cancers.

Compared to a commonly prescribed cancer drug, Adriamycin, often given to chemotherapy patients, Graviola is said to be 10,000 times stronger than the drug at halting cancerous cell division. These results were confirmed at the Catholic University of South Korea and published in the Journal of Natural Products. Purdue University has also found that Graviola leaves are anti-tumorous. Even tumors that were resistant to chemotherapy treatments responded well to the active compounds in Graviola leaves.

The reason you likely haven’t heard of this cancer-killing winder is the same reason thousands of other natural therapies are suppressed. Unless they patent the tree compounds, pharmaceutical companies can’t make a dime off of cancer patients. It is currently illegal to patent naturally occurring chemicals, and since Big Pharma would have to reproduce several annonaceous acetogenins in the laboratory to hopefully get the same results as the natural Graviola compounds, we have yet to be introduced to a ‘Graviola’ drug. But why bother – the natural compounds work just fine – as proven in laboratory tests. No one needs to spend thousands on synthetic acetogenin when Mother Nature gives it to us for free.

Other Benefits of Graviola

Graviola is also called soursop and guyabano, or the scientific name, Annona muricata. While the fruit-bearing tree can also be used medicinally by utilizing the fruit, roots, and bark, the leaves themselves contain the highest concentrations of the active ingredient, acetogenin. Soursop also helps with endocrine system problems, and supports the liver, kidneys, thyroid, pancreas, intestines, gall bladder, ovaries, and prostate. It has even been shown to reduce brain tumors and halt breast cancer. The tree grows all over Mexico, Cuba, the Caribbean, Central America, and northern South America.
Graviola does have a few contraindications. Pregnant women should not take high doses since a fetus also produces high levels of ATP (like cancer cells), and the seeds and roots can be neurotoxic, where alkaloids are highest in concentration. The leaves and pulp of the Graviola fruit are safe; however, and the leaves contain the highest levels of acetogenins, anyhow.


How to Prepare soursop tea and drink

Soursop has very large benefits in the prevention and fight against cancer.
For prevention, it is advisable to eat soursop fruit or drink its juice.
For effective healing and to fight cancer always take Soursop Tea.
Step1.
Boil 1 liter of water, then take 15 soursop dry leaves (fresh or dried ones both have same value) and 1 small stem, cut into small pieces and put into the boiling water.
Step2.
Don't close the vessel and Continue to boil the water on small flame for 30 mins,until the water evaporates to 500 ml .
Now the soursop tea is ready to drink. Drink 1 cup (165ml) filtered soursop tea hot or warm or cool , 3 times every day, in the morning, afternoon and in the night.
For better taste you can add 1/2 spoon of lime juice ,2 pudina leafs and add some honey (not sugar).

After drinking, the body may feel the effects of heat, but no side effects.To cool the body drink 3 glasses of fruit juice like sweet lime or pinapple or eat water milon, and drink 3 glasses of buttermilk every day. In 2 weeks time you can feel the benefits of soursop yourself, and in 4 weeks time the improvements can be felt clearly. After 2 months you can go for a medical ckeck up.
Note: Take Soursop tea 30 mins. before food always to be more effective.

Soursop Leaves which are organically grown are now avaliable in India.The other name of Soursop is Graviola which are not cultivated in India, We import the Best quality soursop fruits and Leaves from other countries.

• Graviola has demonstrated uterine stimulant activity in an animal study (rats) and should therefore not be used during pregnancy.
• Graviola has demonstrated hypotensive, vasodilator, and cardiodepressant activities in animal studies and is contraindicated for people with low blood pressure. People taking antihypertensive drugs should check with their doctors before taking graviola and monitor their blood pressure accordingly (as medications may need adjusting).
• Graviola has demonstrated significant in vitro antimicrobial properties. Chronic, long-term use of this plant may lead to die-off of friendly bacteria in the digestive tract due to its antimicrobial properties. Supplementing the diet with probiotics and digestive enzymes is advisable
• Graviola has demonstrated emetic properties in one animal study with pigs. Large single dosages may cause nausea or vomiting. Reduce the usage accordingly if this occurs.
• One study with rats given a stem-bark extract intragastrically (at 100 mg/kg) reported an increase in dopamine, norepinephrine, and monomine oxidase activity, as well as a inhibition of serotonin release in stress-induced rats.
• Alcohol extracts of graviola leaf showed no toxicity or side effects in mice at 100 mg/kg; however, at a dosage of 300 mg/kg, a reduction in explorative behavior and mild abdominal constrictions was observed. If sedation or sleepiness occurs, reduce the amount used.
While research confirms that these antitumorous acetogenins also occur in high amounts in the fruit seeds and roots of graviola, different alkaloid chemicals in the seeds and roots have shown some preliminary in vitro neurotoxic effects. Researchers have suggested that these alkaloids might be linked to atypical Parkinson’s disease in countries where the seeds are employed as a common herbal parasi
Posted by arclein at 12:00 AM