Are the Muskogee Creeks, the descendants of the Olmec Civilization? 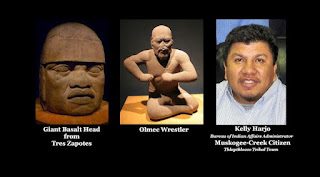 One of my more speculative conjectures happens to be that the Atlantean collapse plausibly sent dependent populations in the Mississippi Basin south into the coastal plains of southern Mexico.  This would be particularly likely if severe tsunamis scoured those coasts first.  This would have happened about 1159 BC.

Prior to that we have evidence of a culturally dominated civilization all over the Mississippi basin that coincides i suspect with the thousand year plus Bronze age epoch of the Atlanteans from 2500 BC through 1159BC.

The new evidence been unearthed by the work of Robert Thornton smacks of the shifts back and forth of successor societies following that collapse.

.
Are the Muskogee Creeks, the descendants of the Olmec Civilization?

June 17, 2016 Richard Thornton Leave a comment
http://peopleofonefire.com/are-the-muskogee-creeks-the-descendants-of-the-olmec-civilization.html
The Creek Confederacy was formed from numerous indigenous ethnic groups, but there is no doubt about it . . . certain branches have the three types of facial features portrayed in Olmec art over 2,500 years ago.  In fact there are people in the Thlopthlocco Tribal Town, who look far more like Olmec art than any indigenous tribe in Mexico today.  As can been seen above, there is a 100% match in facial features between BIA Administrator Kelly Harjo and the famous stone portrayal of an ancient Olmec king.  Brother Harjo could be his direct descendant.

Did you know that Thlopthlocco Tribal Town was originally located in Lee County, Alabama (Auburn-Opelika)?   The town of Waverly was originally named Thloblocco.  The descendants of Creeks, who elected to stay on their allotments rather than move to the Indian Territory, still live there.  Several have served on its city council.

As mentioned in an earlier article in The Mayas Today series,  the Creek Migration Legend began in the same part of Mexico where the Olmec Civilization once thrived.  In Part Four, we saw a drawing of a Muskogee Creek town in Middle Georgia, sketched by William Bartram in 1776, that had every architectural element of the great Olmec city of La Venta in 600 BC!   The Olmec Civilization was really just the first phase of the Maya Civilization.

There is much more to the story than shared regal looks.   At the same time that I was doing the research for building the Etowah Mounds model,  which is on display in the Creek Capital in Okmulgee, OK,  archaeologists announced the discovered of the earliest known writing system in the Americas.  It was found in an Olmec town site that was once a suburb of the Maya city, now called San Lorenzo.

I was astounded to see that the symbols in this writing system could be found in the art of Etowah Mounds and the Ortona town site on Lake Okeechobee, Florida.  There must be a direct cultural connection.   You will learn about that connection in Part Five of the series.

The Itsate-speaking (Hitchiti) branches of the Creek Confederacy do not resemble Olmec statuary at all.  We look like the Highland Mayas of Chipas, Guatamala and Belize.  A few months ago a Creek friend sent me a photo of a Kekchi Maya man from the Belize Highlands, who was a “spitting image” of me when I was in my thirties.  Also, the architecture and town planning of the Itsate Creeks were different than those of the Muskogees.  Nevertheless, variety is the spice of life.

There will be many OMG moments in Part Five of The Mayas Today.
Posted by arclein at 12:00 AM