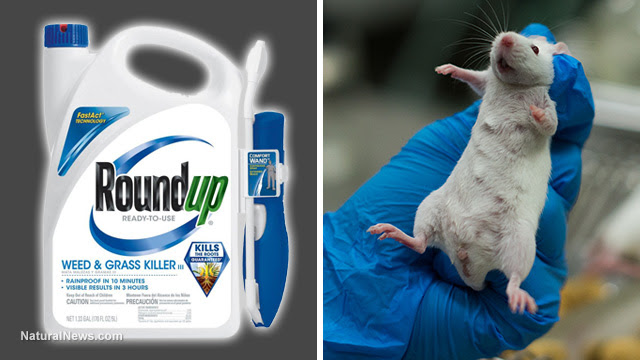 This is actually the worst possible news.  This poison is sprayed everywhere as a herbicide and it remains in the soil forever.  Not only are we hitting all forms of wildlife, we are creating a background toxicity that must linger for generations.

Now we know even a slight exposure, wrong time can be very damaging.

For the user, one accident is enough in a lifetime.


(NaturalNews) New research shows that ultra-low dose exposure to glyphosate, the active ingredient in Monsanto's Roundup, causes massive gene alterations in lab rats, according to a study published in the journal Environmental Health.

The report is the first in a series of studies observing the effects ultra-low doses of glyphosate have on gene expression profiles and the subsequent epigenetic changes, or changes that become inherited patterns of gene function, which can lead to other health problems down the road.

The research is being led by Molecular Geneticist Dr. Michael Antoniou with King's College in London, and Cellular and Molecular Biologist Dr. Robin Mesnage, who successfully reverse-engineered the co-formulants in Roundup.

This was a major achievement considering that the identity of the herbicide's "inert ingredients," as well as their health effects on humans, were unknown and poorly understood prior to Mesnage's discovery, which found that these supposed "inactive" ingredients may be more dangerous to humans than glyphosate alone.

His research group, Gene Expression & Therapy Group, uses "cell and molecular analytical approaches to investigate transcriptional and post-transcriptional events that regulate gene expression including in response to various environmental stimuli," such as commonly used pesticides and other chemical pollutants.

GETG is particularly interested in how brief chemical exposure during fetal development and early on in life permanently impacts gene control, as well as the effects of low-dose chemical exposure on the endocrine system.

"Such a fixed change in gene expression pattern can lead to all kinds of problems later in life ranging from obesity, diabetes, a propensity to certain cancers and so on," said Dr. Antoniou.

Could herbicides be the cause of animal deformities in Argentina?

If glyphosate, even in ultra-low doses, can alter gene expression during fetal development, is it possible that the herbicide can also cause severe deformation in animals?

The mutations have quadrupled since Argentina upped its production of genetically modified soy, a crop designed to withstand high doses of Roundup. Farmers and the local media are blaming herbicides.

Dr. Mesnage analyzed the transcriptomes of the livers and kidneys of ten rats exposed to ultra-low doses of Roundup for two years, as well as ten unexposed controls. The team used principle component analysis (PCA) visualization, heat map visualization and statistical analysis to observe the effects.

"Rats have around 28,000 genes, only a subset of which will be switched on in the liver and in the kidney. Each gene is a dimension of analysis so you have 28k variables, which you need to reduce to something manageable," explains Dr. Antoniou.

"Using a PCA visualization, Qlucore allows you to graphically represent all these variables in just three dimensions, so that each animal occupies a particular location. Very quickly you can see how each animal relates to another and any treatment-related effect. If a number of animals are clustered together, you know that the effect is the same."

Using these techniques, researchers observed that the rats treated with Roundup had massive alterations in gene expression, while the control group did not.

Dr. Antoniou and Dr. Mesnage will continue their research using technology that allows them to "make predictions based on molecular 'signatures.'"

"If you see an alteration in a certain pattern of gene function, you can compare that pattern to another batch of genes to see if the signature matches. By taking those alterations and looking at them collectively, you could predict over time that a certain health problem will be the outcome," says Dr. Mesnage.

If such signatures can be identified, researchers will be able to conduct animal studies much faster, in a matter of months compared to years.

"Even though the exposure would be short, we are interested in whether we might still see an alteration in gene expression patterns in the blood, liver and kidney, even if the animal doesn't show any overt health problems," Dr. Mesnage adds.

http://www.naturalnews.com/054224_Roundup_gene_alteration_lab_rats.html#ixzz4ALvxS2oa
Posted by arclein at 12:00 AM