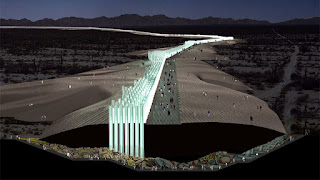 Don't tell me that the SOB has a winning plank that wins the Hispanic vote. He may well have.  All the party needs to do is now advertise an army of respected Hispanics calling for that border wall and explaining why.

What a total misread by the press on this topic.  Just how many Israelis, both Jewish or Arab actually oppose their wall?  It simply works way too well.

Perhaps Canada needs to demand that the USA also build a wall as well because the USA is failing to stem illegal immigration and this makes Canada vulnerable as well.

This is an unexpected surprise.

When Esquire Magazine’s Editor-in-Chief Jay Fielden visited the Southern border to see what residents along the area thought about GOP nominee Donald Trump’s proposal to build a border wall, he was not only surprised from their reactions, but also how the visit changed his.

Fielden went on MSNBC’s “Morning Joe” to talk about his piece for Esquire, a typically liberal magazine, titled “A Modest Proposal For Our Times,” telling host Joe Scarborough that southern border residents more than agree with Trump’s border wall.

“This is pretty shocking stuff. So, you send a liberal journalist down there,” Scarborough said. “He comes back saying, ‘Trump is right. They need to build a wall.'”

“That’s right. So we said, you got to go down there with no pre-conceived notions. Right,” Fielden responded. “Just an empty notebook. Go to my former home state and walk the border, drive the border, 800 miles and talk to whoever you see. And let them tell us what they think about what’s really going on, whether we need a wall, in fact. Instead of hearing it from the debate stage, let’s hear it from the people who deal with it everyday.”

Then Fielden revealed the big surprise that Esquire found, which is that residents truly want Trump’s border wall.

“They said, ‘Build the wall,'” said Fielden. “They said two things, whether they were Hispanic, Anglo, Democrat, Republican, uncommitted, clueless, whatever; they said we want a wall and yet we want it to be married with some compassion toward the people that we’re trying to keep from jumping over the border.”

But, that wasn’t even the most surprising aspect of the Esquire piece.

“Here’s another surprising thing from the article, is that he said that Hispanics were less sympathetic towards illegal immigrants than whites,” Scarborough said.

“But one thing I think is that most of those Hispanics are first-generation and they see it as unfair,” Fielden reiterated. “That they came over here the legal way, became citizens and now they’re having to compete for jobs with those who are coming across the border on a daily basis. Right? So, I think they feel as one guy says, ‘Let them get in line.’ Right?”

Trump’s proposal for a border wall was originally panned by GOP establishment-types, though one of his key supporters, conservative icon Phyllis Schlafly, is now demanding the Republican Party put the proposal into their official party platform.

Here’s what Schlafly wrote this week in a scathing piece to the republican establishment:

Even some members of the Republican National Committee are resisting the wall as a political statement that belongs in the party platform. One RNC member called the wall “a symbolic thing” rather than “a physical thing,” while another member said the border wall is not to be taken “literally” because “it is a metaphor.”

The two RNC members are right that the border wall would be a powerful symbol, but only if and when it is actually built. Once completed, the wall on our southern border would stand as a “metaphor” for the fact that coming to America requires the invitation and permission of the American citizens who are already here.

The 2012 platform has many good provisions, including opposition to “any form of amnesty” and support for states using their authority to enforce federal immigration laws. But building a wall is now the foundation of Republican immigration policy – and yes, Mexico will pay for the wall.