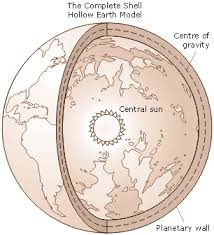 By everything we thought we knew all this is utterly impossible.  Except there are real hints in the evidence and we have already posted a major article developed for the moon.  What becomes blindingly clear is that the moon was used as the machine for terraforming a barren planet called Earth around four billion years ago.  This meant that the moon(machine) was inserted in time to that era and ongoing modifications made from the present of the operators.  All this alone is a huge leap that then begs the question of life origins generally.

Now we have come to understand completely a new paradigm in particle physics.  There are consequences.

Thus we come to our first unusual conjecture and it is a whopper.

Conjecture  - The first tier of matter does incline to attract and pack.  This is because it typically sets up as dual neutrino pairing with four centers thus inducing a fourth order metric and a concomitant attractive force.  Thus any established center will have an incoming flux.  This will continue to produce a packed body that at some point ignites.

Conjecture -  Ignition means just that.  Decay processes then produce dark matter and radiation of mostly one wavelength.  This dark matter then floods surrounding space and it is almost non compressible.  What is also produced is third tier matter in the form of neutron neutron pairs which also will pack up and decay into known elements those gravitational effect is negligible.

Conjecture   This third tier matter is driven out of the ignition center by the radiation to form a surrounding cloud readily sustained as a shell like structure.  Remember scant gravity is involved here.  Thus larger objects become suns consuming vasts amounts of hydrogen.  Smaller centers produce a steady supply of atoms and must stabilize with the larger atoms forming a rocky shell.

There must be a stable configuration in all this that allows ongoing conversion and accumulation without going off the tracks.  Most likely the Sun sponges up most of it allowing the planets to stabilize.  That allows suns to become larger which is what we observe anyway.

It then follows that all planets are natural incubators for life on the inner surface of the shell and that our surface project happens to be the odd man out. It also makes Swedenborg and others completely correct when they reported life on these planets.

The central point here is that the impossible is completely possible with my new physics and i would not have expected that except for the prodding of the seers.

This is worth addressing. First off it appears that short hops are done carefully in order to prevent significant disturbance which makes good sense. No tourism.

However, moving back four billion years can surely only be done in terms of alternating a solar system outcome as appears to have happened.


In my cosmology as well time itself steps forward in discrete steps that eliminates mathematical continuity in the time stream itself. this is caused by the nature of the fundamental building block of a universe which counts time by acting as a three dimensional pendulum which resets all axis. This appears to be the neutral neutrino which forms the first tier of matter.


Thus stepping back in time can be done by inserting a convenient page to the time point desired. Amazingly it appears to have been done and may well have been around half a million years ago. The solar system would have been barr3en and this action would have changed that outcome.