Muhammad Ali Risked It All When He Opposed The Vietnam War 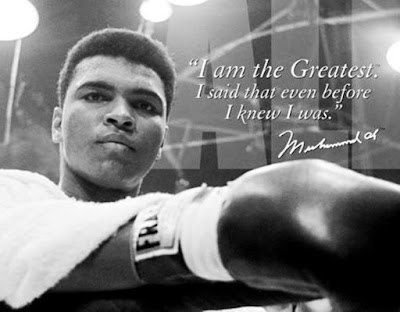 We get to say goodbye to Mohammad Ali, a truly great boxer but as this item makes so clear, a remarkably clear headed advocate for opposition to Vietnam.  When he started there really was no anti war movement except the old die hards from wars past.  He really bit the bullet on this one and could have backed off at anytime.  As a then fan, i was disappointed that he was forced from the game he wonderfully dominated.

A fond memory was my sitting at the kitchen table listening to his final Sonny Liston fight on CBC Radio. I was seriously excited and during the three or four minutes that the fight actually lasted, I laid out three games of solitaire and won all three.  I have not done that before or since.

Quoting his IQ as 78 as per army does not compute, he was far too eloquent.  That was wilfill and likely did not fool the army either once he became famous.  Yet in those days they truly though that they owned everyone anyway.

His decision to join Islam and to confront the draft as a conscientious objector was reasoned and respectful.  He paid but he also challenged the USA power equation in a way never imagined.  His leadership was a powerful symbol that crystallized opposition.

Muhammad Ali Risked It All When He Opposed The Vietnam WarHe chose his beliefs over his boxing career.

Justin Block Associate Sports Editor, The Huffington PostLG/APMuhammad Ali was one of the most famous conscientious objectors to the Vietnam War.

Muhammad Ali’s most famous act of social activism — one that would strip him of his best fighting years, cost him millions of dollars, forever alter his image and eventually send him into debt — began with one off-hand quote: “Man, I ain’t got no quarrel with them Viet Cong.”

It was March 1966, and the U.S. military was escalating its fight in Vietnam. It began substantially lowering its standards for the draft so it could conscript more men, and call up men with lower IQs for 1-A service. This meant that Ali, whose Army-tested IQ score of 78 had been too low for the draft in 1962, was now eligible for unrestricted military service.

The boxer, who died Friday night at the age of 74, happened to hear this news while surrounded by reporters, and in a classic, boisterous knee-jerk reaction — I ain’t got no quarrel with them Viet Cong — he set off a years-long cultural revolution.

For the most famous athlete on the planet to openly decry the war was, at the time, blasphemous. When he declared his apathy toward the Viet Cong, public support of the Vietnam War was at its peak — in the first three months of 1966, the war’sapproval rating was over 50 percent, according to Gallup. Ali, citing his faith and membership in the Nation of Islam, refused service and said he was a conscientious objector.

In a flash, Ali, already controversial for his conversion to Islam and name change from Cassius Clay, became one of the most hated public figures in the country. Nobody close to Ali’s level of fame had resisted the draft, and his seemingly flippant opposition to the war made him a target of ridicule from the public, the government and his sport. He’d spend the next four years battling for his beliefs in court instead of the ring, and after his 1967 arrest for draft dodging, all of his state boxing licenses were stripped. Ali’s boxing career was effectively over.

For a time, Ali continued to face public pressure to accept service. During his four years of court battles, he was given opportunities to recant, apologize and join the military in an entertainment capacity — to perform for the troops and cameras and show off his own signature persona. He declined, and some of his allies turned against him.

The Nation of Islam, the same religious group that anointed him Muhammad Ali, disavowed him for his style of active resistance, according to Dave Zirin’s A People’s History Of Sports In The United States. Jackie Robinson, an athlete and activist himself during his playing years and beyond, ripped Ali for disappointing black war veterans, and by and large, black soldiers agreed with Robinson: Ali was being too radical.

APAli spoke out about race relations and the Vietnam War across the country during his exile from boxing.

“He’s hurting, I think, the morale of a lot of young Negro soldiers over in Vietnam,” Robinson said. “And the tragedy to me is, Cassius has made millions of dollars off of the American public, and now he’s not willing to show his appreciation to a country that’s giving him, in my view, a fantastic opportunity.”

But to Ali, that “fantastic opportunity” was a death sentence, and moreover, representative of the white aristocracy’s use of poor, often black Americans to fight the war for them.

Anyone who immediately came to Ali’s defense put themselves in danger. In A People’s History Of Sports In The United States, writer Jerry Izenberg recalled receiving bomb threats and tons of hate mail because he was willing to hear Ali out in the early days of his service refusal. But in most of the media, nastiness prevailed. Unlike Izenberg, famous sportswriters like Red Smith and Jim Murray were calling Ali a “punk” and “the white man’s burden.”Americans Rally Around Ali

Ali wasn’t alone for long in his anti-war stance. While his legal case continued, he kept up his anti-war rhetoric, based on arguments against the systematic classism and racism decried by the civil rights movement of the 1960s. His stump speech was simple, but powerful and impassioned: I won’t be used by powerful white men as a tool to kill other people who are fighting for their own beliefs and freedoms, and neither should you, especially if you’re poor and/or black.

The longer Ali remained free, the lower the war’s approval ratings dove. Per Gallup, they immediately began to slip after Ali’s “I ain’t got no quarrel” comment. A month after that line hit the press, support for the war slipped below 50 percent for the first time. Two months after Ali was convicted for draft dodging in June 1967, only 27 percent of Americans approved of the war — the lowest point during President Lyndon B. Johnson’s administration. Ali even implored Martin Luther King Jr. to speak out against the war

MARKA VIA GETTY IMAGESAli couldn’t legally fight, but he could still train.

By the summer of 1967, many Americans, particularly black Americans, were now all-in on Ali. His courage and masterful promotion of his ideas (after all, this is the athlete who embodied self-promotion) helped the civil rights movement move forward and the war’s popularity sink.

In 1968, with his court case under appeal, Ali found himself in grave financial debt. To earn money in lieu of the millions he could’ve been making boxing, he began giving hundreds of speeches at college campuses, to young audiences that would make up the vehement anti-war movement. Ali solidified himself as a peace-maker and the counter-culture icon young Americans yearned for.

After years of appeals, the Supreme Court overturned Ali’s conviction in June 1971. By then, states had begun reinstating his boxing license. His view of the war became America’s view of the war, and people were ready to see their hero back in the ring. And after three and a half years, he returned, beating Jerry Quarry in October 1970 in Atlanta.

All told, Ali’s significant career sacrifice and what it stood for radiated across the country, and no athlete has had such a marked social impact since. Fifty years after Ali said he had no quarrels with the Viet Cong, professional athletes still speak out admirably on social issues — most notably, LeBron James wore an “I Can’t Breathe Shirt” in December 2014 to support Eric Garner protesters — but they don’t really face the risks Ali did.
\

ASSOCIATED PRESSWhile still important, symbolism is usually as far as today’s athletes are willing to go to make a political point.

Today’s brand-focused, business-like athletes generally choose to make ornamental political statements with T-shirts, playing accessories and social media posts, and not to put their careers on the line with their activism.

Simply put, there’s too much money at stake in today’s modern sports culture. Choosing to sacrifice nearly four years of one’s career seems unthinkable, no matter the cause. The peak time for professional athletic performance is between 25 and 27 years old, and that’s when star athletes receive their largest contracts. Ali was sidelined for that period of his life.
Late civil rights movement leader Stokely Carmichael perhaps put it best, as quoted in Zirin’s book:

Of all the people who opposed the war in Vietnam, I think that Muhammad Ali risked the most. Lots of people refused to go. Some went to jail. But no one risk as much from their decision not to go to war in Vietnam as much as Muhammad Ali. And his real greatness can be seen in the fact that, despite all that was done to him, he became even greater and more humane.

His humanity — that’s where Ali’s true greatness lies. Sports fans can say we were robbed of Ali’s true prime, but society gained something much better: a leading voice against the class and race issues that intertwined with one of the deadliest foreign wars in U.S. history.
Posted by arclein at 12:00 AM