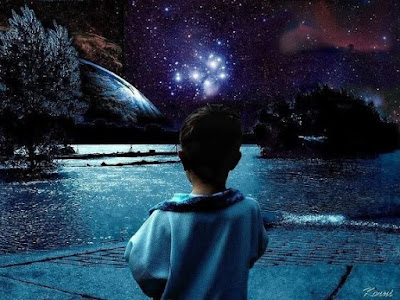 By now we have long learned to take any such reports very seriously.  This is the second report regarding a library under the Great Pyramid.  Very Curious.

The demise of the Lemurians is unusual and is linked here to a failure to develop spiritually.  This is not a conceptualization that we can expect from a child.  So where did this all come from?  I have not come across these details anywhere else to date. Yet they conform to my present developed expectations.  I am not surprised by anything except that we finally pin down the Lemurians as a non human race operating 70,000 years ago.  Recall that Cayce had issues regarding dates although that needs revisiting.

I would love to find a reference to someone else saying all this.

According to reports, a young boy called Boris Kipriyanovich, who lives in Russia’s Volgograd region, reincarnated Indigo Child. His knowledge and skills have fascinated not only his parents but researchers who have studied the young boy.

Ever since Boriska (his nickname) was four years old, he was used to visiting an anomalous zone referred to as Medvedetskaya Gryada, which a small mountain in the vicinity of Zhirinovsk, where the boy lives with his parents. His parents stated that their child needed to visit the zone regularly in order to fulfill his needs for natural energy.

While the story might sound fascinating and unbelievable to some, his parents, well-educated people are in fact worried about the incredible talents their son possesses. They are afraid as to how society will accept Boriska when he becomes an adult.

Boriska’s mother, a local doctor, noticed how special Boriska was since he was a baby. 15 days after birth the young child could hold his head without aid. He started speaking a few months after birth when he pronounced the word ‘baba’ after which he started pronouncing more difficult words with ease. When Boriska was only one and a half years old, he began reading and at the age of two, the young child could already draw and paint shortly after.

His talent and amazing skills were noticed soon after he started attending the kindergarten when tutors notice his incredible writing and language skills and fascinating memory.

However, his parents state that Boriska has obtained further knowledge from a source they say out of this world.

“No one has ever taught him,” Boriska’s mother said. “Sometimes he would sit in a lotus position and start telling us detailed facts about Mars, planetary systems, and other civilizations, which really puzzled us,” the woman said in an interview with pravdareport.com 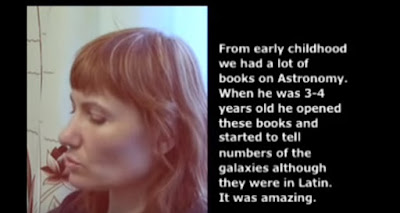 Boriska’s mother claims the boys knowledge of the universe is fascinating.

Boriska’s fascination with lost civilizations and space is beyond fascinating according to his parents. His interest in diverse subjects increased when his mother gifted the young boy a book called “Whom We Are Originated From” by Ernest Muldashev. His parents say that the young boy could spend hours looking at the drawings of the ancient Lemurians. According to his mother, Boriska states that the Lemurians inhabited Earth 70,000 years ago, and were massive beings, which grew nine meters in length.

The boy’s mother was not sure what to think, whether the child’s imagination was over-developed or if there is a small possibility that what he was telling was the actual truth.

In one occasion, his mother asked “How can you remember all this?” to what he responded: “Yes, I remember, and nobody has told me that, I saw it.” 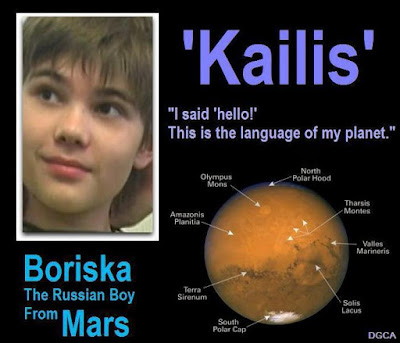 Boriska went on to say that there are great discoveries still waiting to be made on our planet. The boy says that a massive knowledge database will be found underneath the Great Pyramid of Giza. He added that more knowledge will be found under another Pyramid yet to be discovered. “The human life will change when the Sphinx is opened, it has an opening mechanism somewhere behind the ear; I do not remember exactly,” he said.

“No, I have no fear of death, for we live eternally. There was a catastrophe on Mars where I lived. People like us still live there. There was a nuclear war between them. Everything burnt down. Only some of them survived. They built shelters and created new weapons. All materials changed. Martians mostly breathe carbon dioxide. If they flew to our planet now, they would have to spend all the time standing next to pipes and breathing in fumes,” Boriska said.

“If you are from Mars, do you need carbon dioxide?”

“If I am in this body, I breathe oxygen. But you know, it causes aging.”

His parents and those who have had the opportunity to speak with Boriska say he has extreme knowledge of space and different dimensions. He possesses knowledge of Interstellar spacecraft and talks about that as if he was an expert. He has even drawn numerous UFOs and explained how they function.

When asked to describe a UFO, Boriska said: “It has six layers. The upper layer of solid metal accounts for 25 percent, the second layer of rubber – 30 percent, the third layer of metal – 30 percent, and the last layer with magnetic properties – 4 percent. If we give energy to the magnetic layer, spaceships will be able to fly across the Universe.”

The story of Boriska is beyond fascinating, and if there is at least a small amount of truth behind his accounts, then society has a long way to go, in order to understand our true origins.
Posted by arclein at 12:00 AM