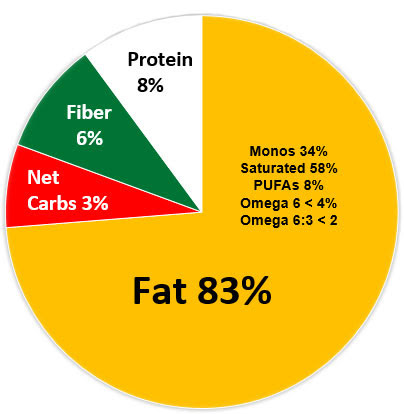 Essentially FDA guidelines are seriously in need of a substantial update. From this item one gets the impression that the warning on saturated fats is still in effect. That error came in in the late fifties. Add in the reality that sugar should be actively limited and the whole set becomes bunkum.
What is happening is that consumers are educating themselves and shifting gears.  I started eating corn oil margarine as a child in response to what is now understood to be fraudulent propaganda.  I finally switched back to butter only recently.  That is how long fraud can sway a market...
The FDA is today under serious pressure because so many decisions clearly favor sponsor interests and testing is rarely independent or certainly compromised.  This must lead to a top to bottom reform.

By Dr. Mercola
If you were to believe the Food and Drug Administration (FDA), Pop-Tarts and Frosted Flakes are healthier than nuts and avocados. This incomprehensible stance stems from the agency’s definition of the word “healthy.”
According to FDA rules, food can only be marketed as healthy if it meets certain nutritional criteria for fat, sodium, cholesterol and beneficial nutrients like vitamins, minerals, and fiber.
Snack foods cannot contain more than 3 grams of total fat per serving in order to qualify as healthy, and only 1 gram of that can be saturated fat. This position is reprehensibly negligent in light of all the new evidence supporting the benefits of saturated fat.
As a result of this outdated — not to mention wrong — criteria, high-sugar, low-fat snacks like Pop-Tarts end up on the “healthy” snack list, while high-fat, low-sugar ones like KIND fruit and nut bars fail to qualify.
FDA to Reassess Definition of Healthy
Last year, KIND LLC received an FDA warning letter ordering the company to cease using the term “healthy” on its snack packaging because their nut bars contain too much-saturated fat. As noted by the Organic Consumers Association:1

“When the term ‘healthy’ was first officially defined in 1994, low fat content was the main focus of health professionals. Sugar wasn’t on the FDA’s, or most nutritionists’, radar.

Kellogg Co. doesn’t generally market its Frosted Flakes or low-fat Pop-Tarts as ‘healthy,’ but under the current guidelines, it could. While the foods are high in sugar, they meet all the criteria, from low-fat to fortified with vitamins.

And fat-free pudding cups can be marketed as healthy, but avocados couldn’t because they have too much fat, according to today’s rules.”

Striking Discrepancies Between FDA Rules and Dietary Guidelines
To prevent ill health, both the American Heart Association and the World Health Organization (WHO) recommend limiting daily added sugar intake to 9 teaspoons (38 grams) for men, and 6 teaspoons (25 grams) for women. The limits for children range from 3 to 6 teaspoons (12 to 25 grams) per day, depending on age.
The problem is, low-fat foods are typically chock full of sugars, and the FDA’s criteria for “healthy” doesn’t even take sugar content into account at all.
As noted by The Wall Street Journal,2 there are even striking discrepancies between the latest U.S. dietary guidelines, issued earlier this year, and the FDA’s criteria for healthy foods.
Not only do the guidelines recommend limiting sugar intake to 10 percent of total daily calories, they also recommend increasing consumption of salmon and nuts, “yet neither food meets the FDA’s criteria for ‘healthy.'”
Following a petition by KIND LLC, and at the urging of both food manufacturers and lawmakers, the FDA has announced it will reevaluate the definition of the word healthily. It will also seek to define the word “natural,” and reevaluate regulations for nutrient content claims in general.3,4,5,6,7
“We very much hope the FDA will change the definition of healthy, so that you don’t end up in a silly situation where a toaster pastry or sugary cereal can be considered healthy and a piece of salmon or bunch of almonds cannot,” Daniel Lubetzky, Chief Executive for KIND LLC told The Wall Street Journal.
While KIND still cannot use “healthy” as a nutrient claim, last month the FDA notified the company saying it could use the phrase “healthy and tasty” in the descriptive paragraph outlining KIND’s philosophy.
According to the FDA, it’s not considered a nutrient claim as long as it does not appear on the nutrition information panel.
Fat Has Been Wrongly Demonized for Half a Century

Saturated fat was a healthy staple in the human diet for thousands of years. Then, half a century ago, professional ambition, bad science, and politics converged to create the myth that saturated fat is bad for your heart. It wasn’t true, but the hypothesis gained legs and health authorities began pushing it.
Food manufacturers responding to the call for low-fat diets removed the fat, replacing it with refined sugar instead. The rest, as they say, is history. The low-fat recommendation has perhaps done more harm than any other flawed dietary advice.
Skyrocketing rates of metabolic diseases like obesity and diabetes can be directly traced back to it. Ditto for heart disease and cancer. Over the past several decades, a number of scientists and nutritional experts have argued against the low-fat myth, pointing out its obvious flaws.
Ignore Low-Fat Advice If You Care About Your Health
In a 2013 British Medical Journal (BMJ) paper,8 prominent London cardiologist and adviser to the U.K.’s National Obesity Forum, Dr. Aseem Malhotra argued you should ignore advice to reduce your saturated fat intake because it actually increases your risk for obesity and heart disease.
According to Malhootra, whom I recently interviewed for an upcoming article:

“The aspect of dietary saturated fat that is believed to have the greatest influence on cardiovascular risk is elevated concentrations of low density lipoprotein (LDL) cholesterol.

Yet the reduction in LDL cholesterol from reducing saturated fat intake seems to be specific to large, buoyant (type A) LDL particles, when in fact it is the small, dense (type B) particles (responsive to carbohydrate intake) that are implicated in cardiovascular disease.

Indeed, recent prospective cohort studies have not supported any significant association between saturated fat intake and cardiovascular risk Instead, saturated fat has been found to be protective.” [Emphasis mine]

Another study9 published in the American Journal of Clinical Nutritionin 2010 noted that a reduction in saturated fat intake must be evaluated in the context of replacement by other macronutrients, especially carbohydrates.
When you replace saturated fat with a higher carbohydrate intake, particularly refined carbohydrates, you exacerbate insulin resistance and obesity, increase triglycerides and small LDL particles, and reduce beneficial HDL cholesterol. The authors concluded that dietary efforts to improve your cardiovascular disease risk should primarily emphasize the limitation of refined carbohydrates.
Another dietary culprit that promotes heart disease is trans fat, found in margarine, vegetable shortening, and partially hydrogenated vegetable oils. Trans fat increases your LDL levels, or “bad” cholesterol while lowering your levels of HDL, known as “good” cholesterol. Like sugar, and perhaps even to a greater degree than sugar, trans fat contributes to many serious health problems, including type 2 diabetes and heart disease.
Foods Marketed as ‘Healthy’ Often Contain Shocking Amounts of Sugar


The real culprit of obesity and heart disease is excessive sugar, excessive protein, and low-quality fat consumption. A high-sugar diet dramatically raises your risk for both type 2 diabetes and heart disease by promoting metabolic syndrome, which includes high blood pressure, insulin and leptin resistance, raised triglycerides, and visceral fat accumulation. In short, when you reduce saturated fat and increase net carbs (total carbs minus fiber), you end up promoting obesity, diabetes and heart disease.
Low-fat food items tend to be particularly high in sugar. Indeed, it’s important to realize that if you eat a diet consisting primarily of processed foods, you are on a high-sugar diet. It’s virtually impossible to avoid added sugar unless you cook from scratch using whole ingredients. Ironically, as noted in the interview above, a major reason why people eat too much sugar is because they’re eating foods that are marketed as healthy!

“People are buying products that are marketed as being healthy or low-fat, which are loaded with excess sugar, and that makes it difficult for them to exercise personal responsibility. Because the food industry knows people will buy food products based on the way they’re marketed and promoted, not on the nutritional value,” Malhotra says.

Even if the food label does not specify “sugar,” it’s likely in there in some form or fashion. According to SugarScience.org, added sugars hide in 74 percent of processed foods under more than 60 different names.10 In the U.S., about half of sugar consumption comes from foods people think have very little or no sugar in them, like condiments and low-fat yogurt, for example.
I’ve previously written about how various “health” foods and beverages contain far moresugar than a glazed doughnut. Take Vitamin Water: one 20 oz. the bottle contains 33 grams of sugar, which equates to THREE Krispy Kreme original glazed doughnuts! Yet most people think they’re simply drinking nutrient-enriched water.
Additionally, most processed foods are made with refined vegetable oils that are predominately oxidized omega-6 oils. Not only are most of us getting an excess of these omega-6 oils, but the refining increases the rancidity and toxic aldehydes that are present when these oils are heated.
How Much Fat, and What Kinds, Do You Need for Optimal Health?
From my review of the molecular biology required to optimize mitochondrial function, it is best to seek to have about 75 to 85 percent of your total calories as healthy fat. That leaves approximately 8 to 10 percent of your calories as protein and 8 to 15 percent as carbs, which should be twice as many fiber carbs as non-fiber carbs like vegetables, seeds, and nuts.
The graph below is generated from data that represents my most recent food selections over a period of two weeks. When it comes to fats, ideally you should have more monosaturated fats than saturated. Also, limit polyunsaturated fatty acids (PUFAs) to 10 percent.
At higher levels, you will increase the PUFA concentration in the inner mitochondrial membrane, which makes it far more susceptible to oxidative damage from the reactive oxygen species generated there. Lastly, do not exceed 5 percent of your calories as omega-6 fats. Combined, your omega 6/omega 3 fats should not exceed 10 percent, and the omega 6:3 ratio should be below 2.