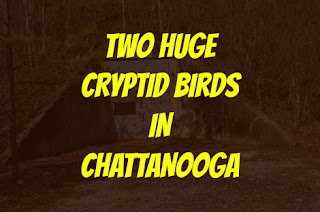 I do not know the exact numbers, but we surely have collected a couple of dozen plausible Thunderbird sightings on this blog.  that is plenty enough to understand that this is probably real enough.  Long ago i worked out its likely life way and all reports nicely conform.

I am largely satisfied this creature actually exists and that it is simply misidentified during daylight hours.  Without a reference we will not recognize size at a distance and the mind will then see what it wants to see.  The best airborne sighting had a small fixed wing flying in front which clearly established wingspan.  Otherwise it would never have been reported at all.

This report popped up because we do have a site reporting all these anomalies.  This nicely flushes out old reports such as this one.  The observer had an excellent encounter but did not know how to carefully observe and we have actions described here.  Still good enough and it is a pair.

What we learn here is that the bird actually used ground stalking to get close to the observers.  This was in daytime and it may well be a defense against human observation and gunfire.  As it is one was roosting in a large tree with good view lines.

Mike in Chattanooga called in to tell of his Thunderbird sighting:

“Where I grew up in Chattanooga, Tennessee right behind my grandmother's house there was a cemetery. Behind that were railroad tracks. Behind that was some government property that everybody always called 'the TNT.' And I was always told they tested bombs, ammunition, tanks and other stuff back there during World War II. When we were kids we would always walk back in there, just wasting time in the woods. It was 8000 acres of just rolling hills up and down, all over the place.

I was back there with my friend one day. I was maybe 13 or 14 years old. And we kept thinking we were seeing someone following us. We couldn't really make out any definition but it just looked like there was a white figure on top of the hill every time we'd get down to the bottom of the hill. We'd get down to this little plateau and we had three ways we could take. We could go back towards the house and we could go left or right and deeper into the woods. One of the ways went up a hill.

All of a sudden I hear my friend go, 'Hey, what's that!?!' I look up in the tree and there is this gigantic bird sitting in the top of the tree, up near the top branches. Before I could even turn up and look at it, I hear this giant whooshing sound behind us and whatever it was, it was following us. It took flight and landed right next to the other one in the tree and when it did, it broke the tree limb. The limbs came crashing down, big loud sound. Both took off into the air, wing span larger than I ever want to imagine at this point. These birds were big enough to carry off a human being. You could definitely hear it. I mean, it was like a whoosh! It was me and my friend Marco and there were two of the birds. After they flew off we kind of skedaddled real quick.

Then a couple of weeks later we go back out into the woods. I've got a rifle, he's got a little handgun. You know, we think we're bad ass. We go out to the same tree and you know there was this branch, freshly broken, same one they were sitting on as big around as, I'd say maybe a coffee can maybe a little bigger, snapped straight off the tree like it was just broke. That was the last time I went back into those woods and they've now turned it into a Volkswagen plant in Chattanooga."

NOTE: This immense tract of land, where this sighting occurred, is part of what used to be the Volunteer Army Ammunition Plant; known locally as VAAP. Consisting of over 7,000 acres located in the heart of the county, the area has always been closed to the public and heavily guarded. Because of this, the area holds a certain mystique for residents.

VAAP’s history stretches to World War II when the federal government acquired 7,000 acres for TNT production. Employment peaked at about 3,500 workers and production ebbed and waned over the years with the ammunition demands for the Korean and Vietnam wars. Production ceased at the facility in 1977.

Is there some type of connection between ordinance plants with flying cryptids and humanoids? Example...the Mothman seen at the TNT plant in Point Pleasant, WV
Posted by arclein at 12:00 AM