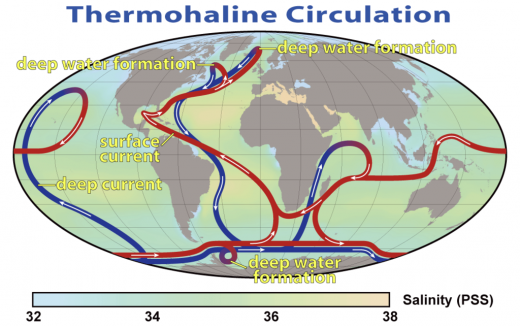 As i posted now years ago, the one thing that could explain little ice ages in Europe was a sharp decline in the volume of heat been supplied by the Gulf stream.  Conversely a steady increase would being about a significant temperature improvement.

Now we are measuring since 2010 and that picked up a twenty five percent decline.  That happens to be huge and seriously important as it is way more significant as a guide to future local temperatures than any other climate driver.

This is an excellent mechanism to explain the sharp temperature drop in fifth century BC and early eighteenth century as well.  I actually surmised as much but never surmised or predicted the actual dimensions of the possible changes in the current.  Something like this can last for decades whereas volcanism usually lasts a season...

Scientists are increasingly warning of the potential that a shutdown, or even significant slowdown, of the Atlantic conveyor belt could lead to abrupt climate change, a shift in Earth’s climate that can occur within as short a timeframe as a decade but persist for decades or centuries.

Scientists in the Labrador Sea recently made the first retrieval of data from one of 53 lines moored to the sea floor and studded with instruments that have been monitoring the ocean’s circulatory system since 2014.

Held taut by submerged buoys, these moorings are arrayed from Labrador to Greenland and Scotland. In total, five research cruises are planned for this spring and summer to fetch the data the moorings are busy collecting.

The instrument array, known as the Overturning in the Subpolar North Atlantic Program (OSNAP), measures salinity, temperature, and current velocity of the surrounding water, data that is vital to understanding a set of powerful currents with far-reaching effects on the global climate. These currents are known as the Atlantic Meridional Overturning Circulation (AMOC) — or, more popularly, “the Atlantic conveyor belt” — and they have “mysteriously” slowed down over the past decade, according to Eric Hand, author of a Science article published this month.

Scientists are increasingly warning of the potential that a shutdown, or even significant slowdown, of the Atlantic conveyor belt could lead to abrupt climate change, a shift in Earth’s climate that can occur within as short a timeframe as a decade but persist for decades or centuries.

North Atlantic waters, such as the Greenland, Irminger, and Labrador Seas, are especially salty when compared with water in other parts of the world’s oceans. When AMOC currents, like the Gulf Stream, bring warmer waters from the south to the North Atlantic, the water cools down, releases its heat to the atmosphere, becomes colder, and sinks, since saltier water is denser than fresher water and cold water is denser than warm water.

In a process called “thermohaline circulation” (“thermos” is the Greek word for heat, while “halos” is the word for salt), this cold, salty water then slowly flows back down into the South Atlantic and eventually makes its way throughout the world’s oceans. At the same time, warm, salty tropical surface waters are drawn northward, where they replace the sinking cold water.

This map shows the pattern of thermohaline circulation also known as “meridional overturning circulation”. This collection of currents is responsible for the large-scale exchange of water masses in the ocean, including providing oxygen to the deep ocean. The entire circulation pattern takes ~2000 years. Image via Wikimedia Commons.

In other words, the dynamic at play in the North Atlantic seas are an important driver of the ocean’s circulation system, which is why the region was selected for the OSNAP instrument array. Two other arrays that have been deployed in different waters have already produced some strange results that scientists are eager to learn more about.

“Models suggest that climate change should weaken the AMOC as warmer Arctic temperatures, combined with buoyant freshwater from Greenland’s melting ice cap, impede the formation of deep currents,” Hand wrote in the Science article. “But so far, limited ocean measurements show the AMOC to be far more capricious than the models have been able to capture.”

An array deployed in 2004 between Florida and the Canary Islands, for instance, showed “unexpectedly wild swings” in the strength of the AMOC currents from month to month, Hand reported. From 2009 to 2010, the average strength of the AMOC dropped by about 30 percent, causing warmer waters to remain in the tropics rather than being carried northward.

Over its first decade of operation, the Florida-to-Canary Islands subtropical array recorded a 25 percent decline in the AMOC’s average strength, which is an order of magnitude more than models suggested could occur due to the effects of climate change.

Meric Srokosz, an oceanographer at the UK’s University of Southampton and the science coordinator for the U.K.-funded portion of the array, told Hand that scientists suspect some natural variation is to blame in the dropoff of the AMOC’s strength, including the 60- to 70-year cycle of varying sea temperatures called the Atlantic Multidecadal Oscillation. Initial analysis of the latest, unpublished data from the array shows the AMOC’s average strength has leveled out, but is still well below where it started in 2004.

“It will take another decade of measurements to separate the climate change effect from natural variability,” Hand wrote.

Models have suggested that there is a threshold below which the AMOC could suddenly shut down altogether — “the doomsday scenario of a frozen Europe exploited in the 2004 disaster movie The Day After Tomorrow,” as Hand put it. “Many climate models suggest that the AMOC should be stable over the long term in a warming world, but plenty of evidence from the recent geological past confirms that the conveyor belt can slow down significantly.”

As far back as 2003, Robert Gagosian, who was then the President and Director of the Woods Hole Oceanographic Institution (WHOI) in Woods Hole, Massachusetts (he’s now President Emeritus), warned that we ignore the threat of abrupt climate change induced by a slowing or shutdown of the AMOC at our own peril.

“[T]he debate on global change has largely failed to factor in the inherently chaotic, sensitively balanced, and threshold-laden nature of Earth’s climate system and the increased likelihood of abrupt climate change,” he wrote in a post on the WHOI website.

Speculation about the future impacts of climate change focus on forecasts by the UN’s Intergovernmental Panel on Climate Change, which projects gradual global warming of 1.4 to 5.8-degree Celsius over the next century, Gagosian wrote at the time. That doesn’t appear to have significantly changed, as the Paris Climate Agreement signed in December of last year commits signatory countries to limiting warming to 2 degrees Celsius, with an aspirational goal of limiting it to 1.5 degrees Celsius — and there’s little to no mention of how the world will fend off the possibility of abrupt climate change.

But we’d be wise to include in our forecasts the potential for relatively sudden, possibly localized climate change induced by thermohaline shutdown, Gagosian argued. “Such a change could cool down selective areas of the globe by 3° to 5° Celsius, while simultaneously causing drought in many parts of the world.”

These abrupt changes could occur even while other regions of the globe continue to warm more gradually, Gagosian said, making it “critical to consider the economic and political ramifications of this geographically selective climate change. Specifically, the region most affected by a shutdown — the countries bordering the North Atlantic — is also one of the world’s most developed.”