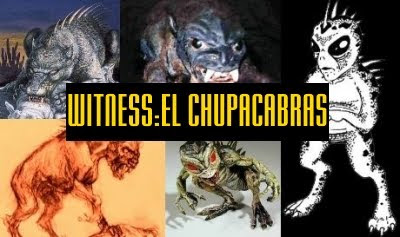 We also have stories with wings as well.  If we presume that the wings are tightly folded against the back we may almost keep them.  More critically it eliminates actual tracks.

The killing of the dog resembles a giant sloth attack and not blood sucking.  There also may be serious differences between male and female.  The lack of a significant tail needs to be noted as well.
I see no comment on tracks in any of this and that is what should be observed in these circumstances.

Yet we are getting much more data here and the hairless aspect has made any identification more difficult.  None of this suggests an actual known earth genus either..

I received the following email from a reader in 2012:


Sr. Lon - I have read your newsletters for many years and I'm very fond of the stories. I must tell you that in early 1995 I was a witness to el Chupacabras attacks near Canóvanas, PR on two occasions. The second attack I caught sight of el Chupacabras killing a large dog in a field behind my Father's workplace. It was after midnight and I was there helping him get extra work done. We heard the dog growling in the back field. I went to look and saw a 4 foot tall thing, very ugly, that I had never witnessed before. The dog was keeping distance from this thing when suddenly it leaped and attacked the dog. It took only a few seconds as it ripped the dog apart. It never made a sound. I quickly ran into the shop and told my Father what I saw. He had a pistol and walked out to see what was there. The only thing that remained was the badly mutilated dog.


I was sure it was was el Chupacabras. There was talk of this creature for several days. It looked like a weird man in the distance shadow but had a lizard head and hairless dog body up close. The large dark eyes were very strange and it used its teeth and long claws to rip apart the dog.


I have read recently that many researchers consider this to be a legend but I will state that it is a completely true creature. Those sightings outside of PR and South America I feel are bogus and may be just dogs.


I thank you for your time - Samuel


The legend of El Chupacabras began in about 1992, when Puerto Rican newspapers El Vocero and El Nuevo Dia began reporting the killings of many different types of animals, such as birds, horses, and as its name implies, goats. At the time it was known as El Vampiro de Moca since some of the first killings occurred in the small town of Moca. While at first it was suspected that the killings were done randomly by some members of a satanic cult, eventually these killings spread around the island, and many farms reported loss of animal life. The killings had one pattern in common: each of the animals found dead had two punctured holes around their necks.


Soon after the animal deaths in Puerto Rico, other animal deaths were reported in other countries, such as the Dominican Republic, Argentina, Bolivia, Chile, Colombia, El Salvador, Panama, Peru, Brazil, the United States and, most notably, Mexico.


Both in Puerto Rico and Mexico, El Chupacabra gained urban legend status. Chupacabras stories began to be released several times in American and Hispanic newscasts across the United States, and chupacabras merchandise, such as t-shirts and baseball hats, was sold.


The chupacabra is generally treated as a product of mass hysteria, though the animal mutilations are sometimes real. Like many cases of such mutilations, however, it's been argued that they are often not as mysterious as they might first appear.


Descriptions of the physical appearance of each specimen can resemble descriptions of other specimens, or differ from other descriptions. These creatures' different incarnations are described in details that make it impossible that these different descriptions are the result of conflicting perceptions. Therefore, the Chupacabra may be several species, or several breeds of one or more species. Although they have different appearances, Chupacabras are typically 3 ft. (1 m) or taller, they are roughly humanoid in shape as they are bipedal with 2 arms, and are described as otherworldly creatures.


Usually, Chupacabras are said to appear in three specific forms:


The first and most common: a lizard-like being, appearing to have leathery or scaly greenish-gray skin and sharp spines or quills running down its back. It stands approximately 3 to 4 feet (1 to 1.2 m) high, and stands and hops in a similar fashion as a kangaroo. In at least one sighting, the creature hopped 20 feet (6 m). This variety is said to have a dog or panther-like nose and face, a forked tongue protruding from it, large fangs, and is said to hiss and screech when alarmed, as well as to leave a sulfuric stench behind.


The second variety appears to bear a resemblance to a wallaby and a dog standing on it's hind legs. It stands and hops as a kangaroo, and it has coarse fur with greyish facial hair. The head is similar to a dog's, and its mouth has large teeth.


The third form is simply that of a strange breed of wild dog that is mostly hairless, has a pronounced spinal ridge, unusually pronounced eye sockets, teeth, and claws, but is otherwise a typical canine. This animal is said to be the result of interbreeding between several populations of wild dogs, though enthusiasts claim that it might be an example of a dog-like reptile. The account during the year 2001 in Nicaragua of a chupacabras corpse being found supports the conclusion that it is simply a strange breed of wild dog. The alleged corpse of the animal was found in Tolapa, Nicaragua, and forensically analyzed at UNAN-Leon. Pathologists at the University found that it was just an unusual-looking dog. There are very striking morphological differences between different breeds, from which wild dogs generally descend. These can easily account for the strange characteristics.

The following sightings were archived by Albert Rosales:

Two anonymous police officers responding to a call in reference to some lambs found mutilated at a local ranch, saw standing on the side of the road, a strange 4 foot tall creature, described as humanoid in shape, orange-yellow in color. The officers did not see any facial features since it was dark. In a quick sudden move the creature ran to its left and into the thick brush disappearing from sight. When one of the officers attempted to follow the creature he was overcome by a sudden headache & severe dizziness & had to be assisted by his companion.

Comments: This case appears to have been the beginning of the so-called Chupacabra epidemic. Also the January 1995 Pitahaya case was significant. The dizziness experienced by the witness is very significant also since it appears that the humanoid exerted some type of "control" over the witnesses, indicating the very interesting display of intelligence by the bizarre creature. - Albert Rosales

Jaime Torres, was standing watch in a ranch area, looking out for reported "UFOs" in the vicinity when he noticed, perched up on a branch of a large tree, a short humanoid creature, with a large hairless head. It had two large slanted eyes, a small mouth, and a pointed chin. The creature had long thin arms ending in four thin long "fingers" or claws. Its legs were a little thicker but also had four claw-like appendages. The witness also noticed that the creature's skin was apparently of different colors, that included gray (on the facial area), maroon, yellow, and purple. As Torres watched, the creature made a strange gesture, slightly turning its head to the side & at the same time emitting a low buzzing sound. At that moment Torres felt a sensation of sleepiness & dizziness. He was able to overcome the feeling in time to see the creature jump from the tree and run into the woods.

At the same time that the investigator was in the area, searching a wooded section, another man saw a four-foot creature that had climbed up halfway a trunk of a tree. The creature was described as having smooth gray skin, no hair, and a round head, with a dark face, a thick torso, and thick short "legs". It also had long thin arms ending in four thin long fingers. The creature suddenly ran into the brush and vanished.

Margarita Torres had been watering some plants with a hose in her backyard, when she noticed, standing some 75 feet away, a short 3-foot tall creature. The entity had a large round head, it was thin, with long thin arms, and it also had large black eyes. Its skin was gray in color. The being had stepped out of the woods and was now walking up a nearby hill. The witness stood transfixed unable to move an inch. As the being moved away, Mrs. Torres was suddenly able to move again, and ran to get her husband. Both now went to look for the creature and found it hunched over looking at a nearby bull in a pasture. The bull had apparently noticed its presence and was acting nervously. As the couple neared the creature, Margarita began screaming hysterically, causing the creature to run very fast into the woods and vanish.