60 Policies from One Year of Donald Trump 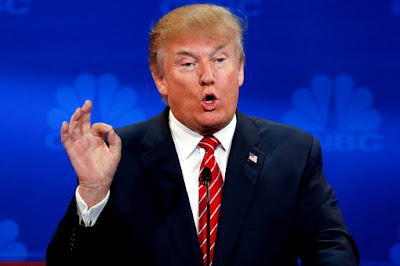 What I do see is not policies so much as debating points aimed at waking up the audience.  If you demand everything and sound unreasonable, it is certain that your opposition will show up ready to do business.  Then you see if it is even possible to shake out a satisfactory solution.

He knows quite well all this must translate into an acceptable body of legislation.  You may also be sure he knows his limitations better than anyone else.  However, bluff is a powerful tactic.

This is the first potential president I have seen in sixty years quite able to run circles around the Russians and even bring Iran to heel.

Otherwise most analysis on Trump that i have seen remains wishful thinking and mostly naive.  He has proven over and over again that he can pick successful partners and build and then get out of the way.  These accomplishments are not bombast.  What better definition exists for a successful president?

60 Policies from One Year of Donald Trump

How to make America a weird and scary authoritarian state:

One year ago, Donald Trump thrust his bizarre, erratic, and incomprehensible campaign on the world. Much has been said about Trump’s "rhetoric" during his campaign — the racism, sexism, incivility, and much else besides — but rhetoric is not what makes a Trump administration a unique threat to the country. It is his policy proposals that should receive our closest attention and concern.

Below is a list of nearly 60 “policies,” if you can dignify them with such a title, that Trump has proposed during his campaign. The list drives home how truly frightening a Trump presidency would be for the country and the world. Skimming the surface of Trump’s stream of consciousness brings out some particularly disturbing aspects of his agenda: notably, the way he singles out specific businesses and individuals for targeting by the government, as well as his obsessions with China, Mexico, Muslims, and immigrants.

Perhaps worst of all, Trump’s proposals expose how broad he thinks the powers of the presidency are: virtually infinite. There is never a glimmer of understanding that the government is bound by the Constitution, that the federal government has limited scope and authority, or that president is just one of three equal branches of the federal government.

Instead, it is Trump, and Trump alone, who will transform American laws, government, and society, from the top down. Trump will bomb and invade countries, Trump will steal their oil, Trump will kill deserters, torture suspects, bypass courts, ban Muslims, break treaties, and have the military do things like mass executions with bullets dipped in pigs' blood — all while getting Americans to say “Merry Christmas” again.

Well, all I can say is Merry Christmas, America. Here's what the primaries brought us this year.

Bold: attack on individual or business.

Italics: attack on Mexico or China.

Underlined: attack on immigration.
June 2015
Posted by arclein at 12:00 AM