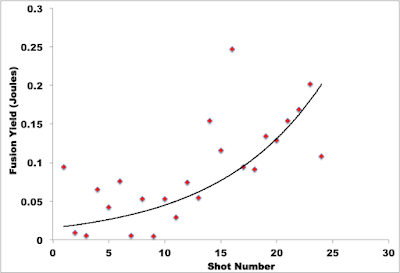 It now appears that progress is accelerating nicely.  Again this is another lesson of just how time consuming technology development happens to be. You truly crawl.

More to the point all this work is conforming to theoretical expectations and real net fusion power appears both probable and ultimately robust as well.

I am especially looking forward to seeing a robust scaling up of this device to produce commercial power.  The design actually lends itself to been easier if bigger.  As suggested, this will be the real power-plant for future star ships.

Six weeks after resuming firing, FF-1’s fusion yield reached 0.25 J on May 23, a nearly 50% increase over the highest-yield shot previously achieved with this device. This increase, confirmed by a second shot on May 24, provides the most concrete evidence yet that our continuing effort to reduce impurities in FF-1 increases fusion yield.

FF-1 resumed firing on April 11 after a bake-out that had removed the vast majority of the oxygen in the device’s vacuum chamber. Unfortunately, three unforeseen circumstances increased impurities far above our plans. First, a leaky valve introduced about 100 mg of water vapor into the chamber right before the first shot, creating a thin layer of oxides. Second, some oxides may have been formed during the heating phase of the bake-out itself, due to a somewhat too rapid rise in temperature. Third, our initial effort at preionization by small pulses of current itself eroded tiny particles from the tungsten anode, allowing them to vaporize into the plasma.

Despite this rocky start, the LPPF research team had reason for optimism. The oxide layer was clearly much thinner than that which we dealt with in 2015, before our bake-out. Then, the layer was opaque to light and the golden color of tungsten bronze, indicating a thickness of at least one micron. But in April, the layer’s color ran in a spectrum from red to violet, indicating interference coloring like that of a soap bubble, and thus a thickness of less than about 0.3 microns, or about 100 mg of oxygen.

Even more important, we could anticipate that FF-1 would be self-cleaning in its current configuration. When fired, the device’s hot plasma would vaporize the oxide layer, breaking up the molecules and releasing free oxygen. Some of that oxygen would be trapped in the titanium nitride coating that we had added to the chamber surface, and bonded too tightly to be released in future shots. Another part of the oxygen would combine with the deuterium gas filling the chamber, becoming water vapor, which could then be pumped out. In that way, the oxides would be reduced shot by shot. 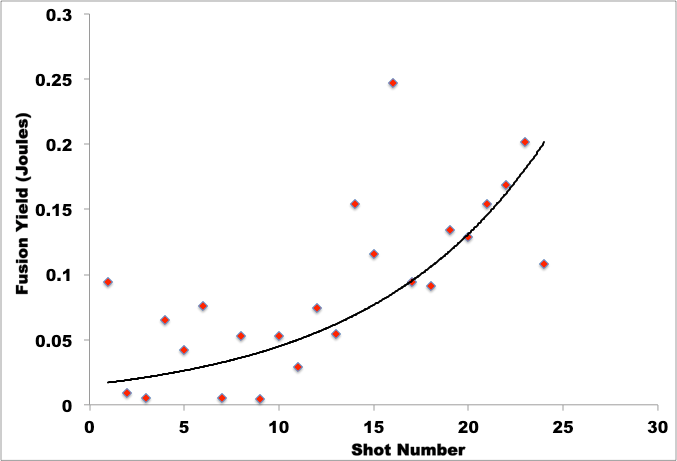 Figure 1. Over the past month, fusion yield has risen shot by shot as FF-1 impurities have dropped. The curve is an exponential fit of 10% increase per shot. Past record yield was 0.17 J.


As we fired, we saw clear evidence of this cleaning effect, as the pressure “pop” after each shot, measuring how much oxygen was released, steadily declined by about 10% per shot. We also observed the fading of the colored deposits and the reduction of tungsten bands in the optical spectra for the plasma.

To improve preionization, we switched, on the suggestion of LPPFusion Research Physicist Dr. Syed Hassan, to a gentler method: a glow discharge. The aim of preionization is to create an electron “traffic jam”—enough free electrons before the main pulses, so that the electrons will move slowly and have too little energy to vaporize the anode when they enter it. While in an arc discharge, a medium current—about 100 amps—is suddenly discharged to create the free electrons, in a glow discharge a much smaller current, of about 40 microamps, flows continuously through the gas. Which type takes place depends on how much current is supplied in the preionization phase that precedes a FF-1 shot. Again we saw clear visual evidence that the glow discharge did not create new dust and allowed the shots to smooth away the erosion previously created. (Fig. 2)

With the improved pre-ionization and FF-1’s self-cleaning, we got our first measurable fusion yield on the 22nd shot, April 26. At that point, fusion yield started an accelerating rise, shot by shot. (Fig.1) We still had too much impurity to run well with our planned nitrogen-deuterium mix. (The tungsten impurities combined with the nitrogen require too much ionization energy to strip off all their electrons during the compression phase of the shot, preventing even compression.) So we switched to pure deuterium. From May 11 to May 18, fusion yield doubled, and then doubled again.

As fusion yield rose, we got several additional indications that with fewer impurities, compression was more symmetrical. The ion beam produced by the plasmoid was going straight down our meter-long drift tube each shot, showing a good alignment of the plasmoid with the axis of the machine. In the past this had occurred rarely. In addition, the “early beam” phenomenon, where the beam preceded the plasmoid formation by 50 ns or more, had disappeared, with the beam peak preceding the fusion peak by only 10 ns. 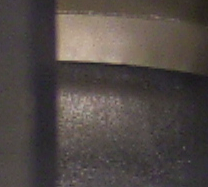 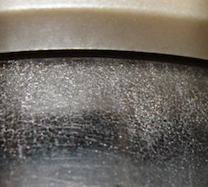 Finally, on May 23, with our 50th shot of the new series, fusion yield rose above anything previously observed with our device: 2.5x1011 neutrons were emitted. Our three methods of counting neutrons (silver activation counter, bubble detectors—see below—and photo multiplier tubes) all agreed that our last record, set almost 200 shots ago back in May, 2013, was surpassed by 45%. A shot almost as big, with over 2x1011 neutrons was observed on the next day. 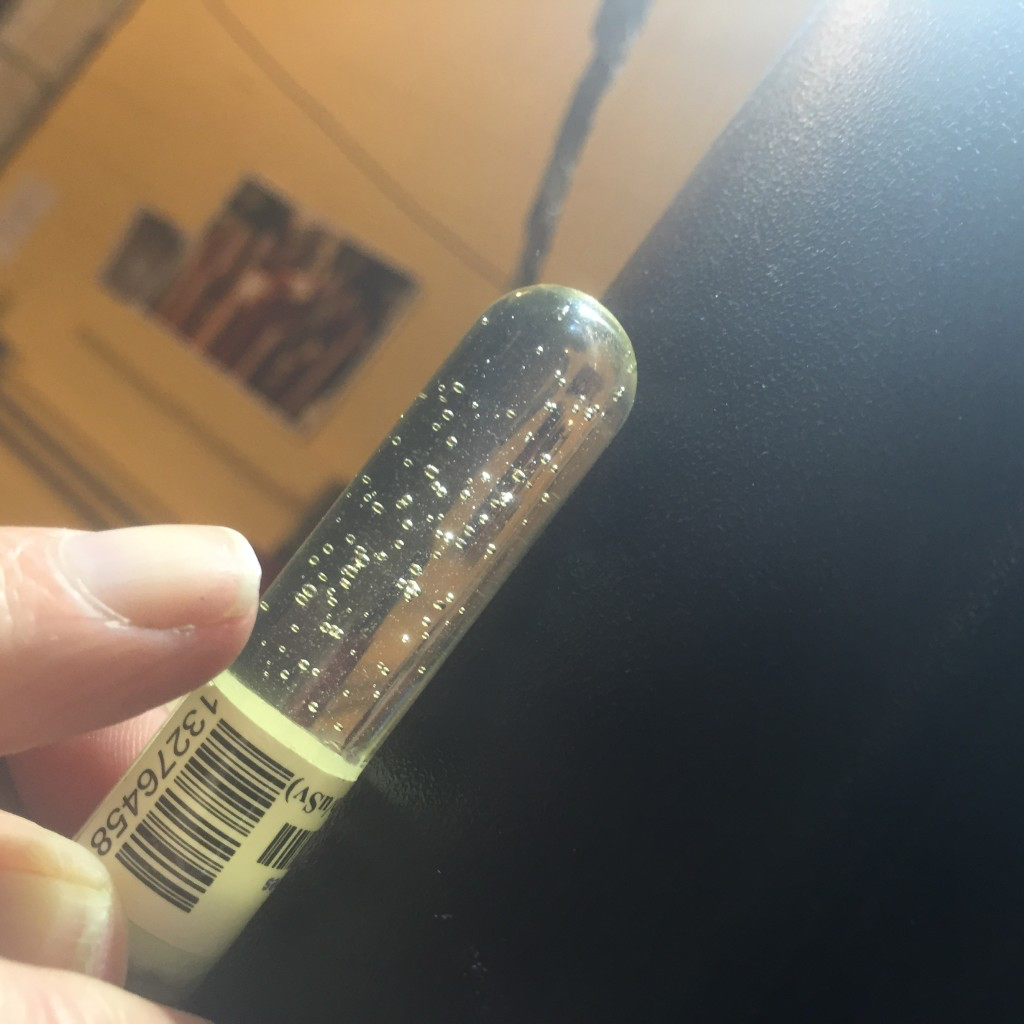 These shots are a record not just for us. For all researchers working with our type of device, a dense plasma focus or DPF, our May 23 shot is 50% more than any previous shot at this peak current of 1.1 MA (million amps) and double the previous record for our total input energy of 60 kJ. This is important, as this shows we are moving back towards the steep scaling law that predicts energy increasing as the fourth power of the peak current. In previous work, this scaling curve has leveled off for current over 1 MA.

The research team expects further progress ahead. In May we were slowed by the need for significant maintenance of switches and their gas supply system. With much of that maintenance out of the way, we hope to get closer to 100 shots per month. In addition, in the past week, as we moved to lower fill pressures, the preionization discharge stopped working correctly. We will adjust the preionization current next week and monitor it more closely to ensure optimal function. We expect that this change, in addition to further self-cleaning, will again increase yield.


Where FF-1 Places in the Fusion Race

Many people have asked where exactly FF-1’s results stand in relation to much better-funded efforts, such as the privately-funded Tri Alpha and General Fusion or the government-funded tokamaks. So we prepared these three charts to summarize the present situation in the “fusion race.” The first chart compares the plasmas that each device creates, using a measure called n-tau-T. For net energy, we need three ingredients: enough temperature, T, to burn fusion fuels, enough time, tau, to confine the hot plasma, and enough density, n, to burn the fuel fast enough, since the burn rate increases as the square of density. Just multiply the three numbers together and you get n-tau-T the density-time-temperature product, a rough measure of how close the plasma is to the conditions needed for net energy. 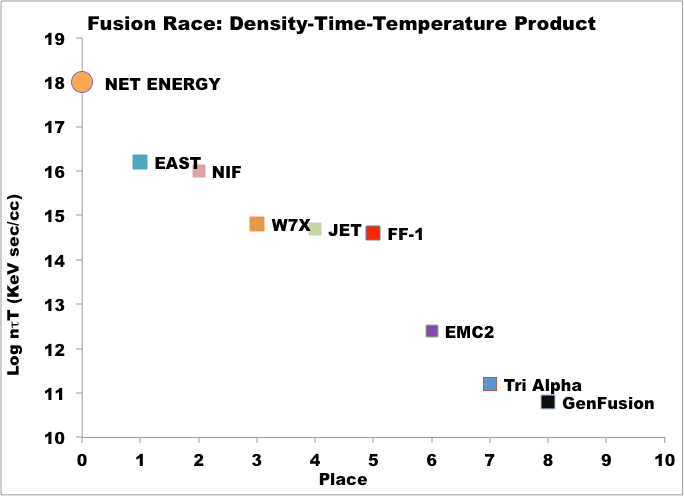 Figure 3. FF-1 is far ahead of other private fusion efforts in plasmas parameters, although not yet ahead of the large government-funded experiments.


In figure 3, we plot the latest published results of various fusion experiments. Right now the best plasmas have been obtained with the new Chinese tokamak experiment, EAST, and the giant US laser facility NIF. In a second group, about a factor of ten lower, is the new German stellarator W7X, the JET tokamak in the UK and our own FF-1 in fifth place. Spread out a factor of hundreds to thousands below the second group are the other privately financed efforts, EMC2, Tri Alpha and General Fusion. These efforts are much better funded than FF-1 but at the moment have far cooler and less dense plasmas.

A better way to look at overall performance of these various devices is what is called ”wall-plug efficiency” (figure 4)—the ratio of the fusion output to the total energy put into the machine from the grid (the “wall plug.”) This combines how good the plasma is at producing fusion yield with how good the device is in getting energy into the plasma. For consistency we are comparing only results running with deuterium as a fuel, not the much more reactive deuterium-tritium mix. 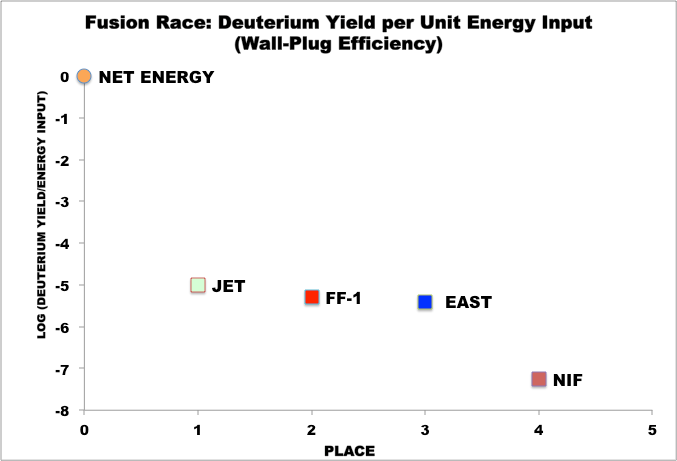 
Here the picture is different. The other private efforts drop out, as they don’t have measurable fusion yield from their machines (or in the case of EMC2 have not published any). NIF drops back to 4th place, because its lasers are extremely inefficient in converting input energy into plasma energy. FF-1 moves up to second place, nipping at the heels of JET, and EAST is in third, right behind FF-1. This is in part due to FF-1’s high efficiency in coupling electrical input into the plasmoid that produces the fusion.

Of course, if one is allocating resources, it also counts how much each research effort costs. In our view, all possible routes to fusion should be funded until one actually succeeds in producing a working generator. But it is worthwhile to see how much progress results from how much investment. In figure 5, we just divide wall plug efficiency by the total cost of the projects to date to get “efficiency per million dollars.” Here, we’re number 1. Since FF-1 has only cost $5 million since its inception, its efficiency per megadollar is ten times that of EAST, a hundred times that of JET and a hundred thousand times that of NIF. 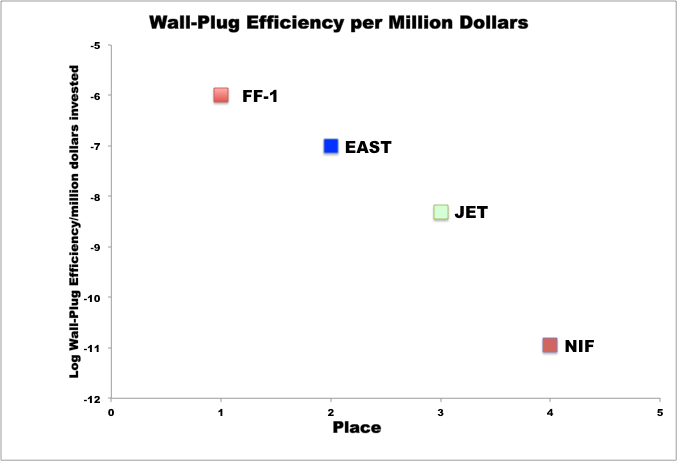 Figure 5. FF-1 is first in efficiency per million dollars invested.

This is, to be sure, just a snapshot of the race to clean energy, one that can change radically in the future. Who knows? We might get to be first in all three charts.
Posted by arclein at 12:00 AM