What Do We Mean by Sound Money? 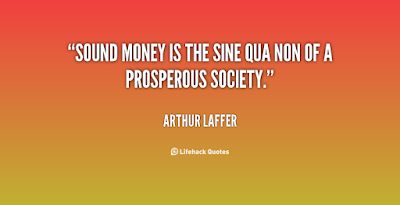 This is actually a good question that has been hopelessly obscured by the historical relationship to physicals  That has produced much wrong headed thinking that is still promoted to this day.

Sound Money means soundly managed money supply.  That means mostly that the natural absorption of money is not exceeded by technical act of producing it and then spending it in such a way to enter the economy most beneficially.
Recall that we all constantly provide demand.  That is not true for anything else.  Because of this demand, providers can demand effort in return.  That drives all aspects of our economy and taxes encourages that activity even more.  Few want to opt out.

Not understood is that we need to fund the top ten percent with ample resources to create wealth and the bottom ten percent  to provide a firm bid for allocated labour.  Between those two tiers, the rest will sort itself out splendidly.  In our case we have funded the top third, but done a poor job regarding the lower third, or at least that is the perception.  Properly we are confused in our policy approach.

What Do We Mean by Sound Money?

I question whether we ever had a practical theory of how to manage money in a fiat money world.The concept of "sound money" evolved in the 19th century as many countries adopted the gold standard. It became associated with commodity money or “hard currency.” For example, Mises (1966: 782) stated:

The principle of soundness meant that the standard coins — i.e., those to which unlimited legal tender power was assigned by the laws — should be properly assayed and stamped bars of bullion coined in such a way as to make the detection of clipping, abrasion, and counterfeiting easy. To the government’s stamp no function was attributed other than to certify the weight and fineness of the metal contained.

There was no requirement that “standard coins” be the exclusive or even preponderant means of payment in day-to-day transactions. So long as banks of issue (private or central banks) maintained convertibility, then the monetary system had the characteristics of sound money. As Mises suggested, government’s role was minimal.

Most 19th century writers on money assumed a system of commodity money with allowance for temporary suspensions during wartime and a return to the standard in peacetime. The suspension of specie payments by the Bank of England during the Napoleonic Wars prompted banker Henry Thornton to author in 1802 a treatise on managing a paper currency: An Enquiry Into the Nature and Effects of the Paper Credit of Great Britain. Thornton was a successful banker with an economist’s understanding of banking, finance, and the real economy. He pioneered analytical distinctions that would not be rediscovered for almost another century: the distinction between real and nominal interest rates, and the concept of an equilibrium or natural rate of interest.

The volume should have become a standard reference work. But it came to be forgotten because the Bank of England re-established convertibility, and other countries gradually adopted the gold standard over the course of the 19th century. How to manage a fiat money system (paper credit) ceased to be a practical issue.

When the Federal Reserve System was created at the end of 1913, the United States was on the gold standard along with most of the rest of the world. The Federal Reserve was not created to manage money in the modern sense, but to provide a national currency as part of a gold standard. No one was thinking of managing a fiat currency on the eve of World War One. That was all soon to change with the requirements of wartime finance.

After World War One, the world returned to a global, pseudo gold standard that was chronically short of gold reserves. The currencies of many countries were overvalued relative to gold. When the system collapsed in the 1930s, countries were thrust into a fiat currency world without a playbook. For a time, there were efforts to restore the global gold standard but they came to naught. World War Two interrupted any effort to craft a new international monetary system.

There is no accepted theory of managing money in a fiat money world. The post-War, Bretton Woods system constituted the new global monetary order. Volumes have been written on it. I do not share the nostalgia of some for it. It was even less of a gold standard than existed in the interwar period. In truth, it was a dollar standard. The dollar was pegged to gold and other currencies pegged to the dollar. There were numerous exchange-rate adjustments. The system contained inner contradictions. Inevitably, the producer of the dominant currency was bound to abuse its “exorbitant privilege” and the United States did so. The system collapsed and the world was then on a fiat standard.

There was no accepted theory of managing money in a fiat money world. This was not Henry Thornton’s world in which fiat money was a temporary expedient with an expectation of a return to specie conversion. It was not the world of the classical quantity theory, which was constructed in a commodity-standard world. The quantity theory demonstrated the limits of monetary expansion (or changes in the demand for money) before prices would begin to rise sufficiently to threaten convertibility. In a classical gold standard, the supply of money is endogenous and the price level fixed in the long run.

The Breakdown of Monetarism

Milton Friedman and the monetarists offered a restatement of the quantity theory and a model of monetary control for a fiat currency. Friedman, his students and colleagues believed they had discovered stable empirical relationships among the monetary base, broader measures of money (especially M2), and the demand for money (Friedman 1956 and Friedman and Schwartz 1956). When monetary targeting was finally implemented by the Volcker Federal Reserve in the 1980s, the posited empirical relationships broke down. The Fed abandoned monetary targeting.

What followed was a period that John Taylor dubbed the Great Moderation, in which the Fed and other central banks seemed to get it right. There was enhanced macroeconomic stability (as measured by decreased variance in prices and output). Taylor discerned that the Fed was following a tacit rule, which others called the Taylor Rule. But the Fed and then other central banks began to deviate from the rule by lowering interest rates in response to the Dotcom bust. Taylor (2009) argued the housing bust was the consequence of the boom created by the policy of low interest rates. “No boom, no bust.” Central banks have not returned to a monetary rule. Instead, they have engaged in monetary improvisation.

It's a New World of Money

The argument for sound money is not merely a technical economic argumentMoney in the 21st century is proving immune to control by central bankers. The relationship between monetary reserves and various monetary aggregates (the money multiplier) has broken down. More precisely, central banks appear to have lost the ability to control inflation.

In the United States, Europe and Japan, inflation rates have remained chronically below central bank targets over the course of the economic recovery from the Great Recession. (The growth of real GDP has also been subpar.) Economists as diverse as Jerry Jordan (2016) and James Bullard (2016) have questioned whether our textbook models of money creation and inflation control are any longer valid. That is not to say that future inflation rates will not rise to two percent or beyond. If they do so, however, it will likely not be the consequence of any central bank policy actions (Jordan 2016).

To reiterate, I question whether we ever had a practical theory of how to manage money in a fiat money world. The proponents of monetary rules believe they have such a theory. One class of such rules involves NGDP targeting.

The specific question I pose for advocates of NGDP targeting is how today will anything the Federal Reserve does to its balance sheet alter the growth rate of NGDP in a predictable fashion? The answer to such a question could be that the central bank should do more. How much more? And what, then, becomes of the rule? It sounds like a recipe for discretion. In any case, central banks have been unable to get either component of NGDP to grow in a normal or predictable manner.

Monetary institutions and policies vary among the major central banks. For instance, both the European Central Bank and the Bank of Japan have instituted negative interest rates on commercial bank deposits at the central bank. Meanwhile, the Fed has been paying interest on bank reserves for some time. The institutions and policies differ, are even opposed to each other, but the policy failures are common. (The policies have failed on their own terms, regardless of whether one agrees with them.)

Let me return to the classical idea of sound money. Sound money is a rule, but of a different kind than modern monetary rules such as the Taylor Rule or NGDP targeting. Sound Money was not a rule based on empirical relationships among economic variables. It was not invented, but discovered. It is more analogous to the rule of law. Mises (1971: 414) made this point clearly. “Ideologically it [sound money] belongs in the same class with political constitutions and bills of rights. The demand for constitutional guarantees and bills of rights was a reaction against arbitrary rule and non-observance of old customs by kings.”

The argument for sound money is not merely a technical economic argument, but a political economy and even constitutional argument. When classical economists contended that commodity standards were a bulwark against inflation, they did not suggest that there would be no variability of inflation under a gold standard. Their own experience told them otherwise. Rather, they recognized that a gold standard was protection against arbitrary actions by sovereigns to depreciate the currency. Protection against arbitrary and capricious governmental actions is what constitutions are meant to provide.

Is there a way to avoid arbitrariness in monetary matters in a fiat money system? Can a monetary rule of some type today provide the protections that existed in the classical, pre-World War One gold standard? These questions are central to the debate over monetary rules. They apart from the technical ones I raised above. Both sets of questions need to be addressed in debates over monetary policy.