A New Form of Light 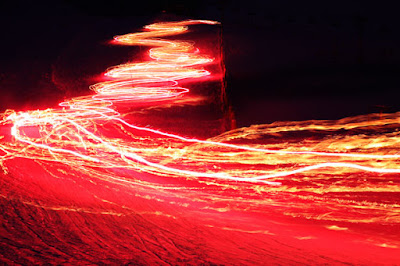 This is really interesting.  Considering that I am modeling all photons as bundles of two dimensional ribbons that can combine end to end or side edge to side edge and may even be in the form of loops as well in the free form.

Such a construction allows a ray to be expanded easily into a tube.  That the ribbons likely spiral around the axis is also a natural consequence.  Again new work continues to fit nicely in to my body of conjectures in suggestive ways.

This also explains how easy it is to use encoded photons to inscribe electrons and inscribed electrons to produce encoded photons.  That was my next troublesome question and what i needed to know is just handed to us..

A New Form of Light

Physicists from Trinity College Dublin's School of Physics and the CRANN Institute, Trinity College, have discovered a new form of light, which will impact our understanding of the fundamental nature of light.

One of the measurable characteristics of a beam of light is known as angular momentum. Until now, it was thought that in all forms of light the angular momentum would be a multiple of Planck's constant (the physical constant that sets the scale of quantum effects).

Now, recent PhD graduate Kyle Ballantine and Professor Paul Eastham, both from Trinity College Dublin's School of Physics, along with Professor John Donegan from CRANN, have demonstrated a new form of light where the angular momentum of each photon (a particle of visible light) takes only half of this value. This difference, though small, is profound. These results were recently published in the online journal Science Advances.

Commenting on their work, Assistant Professor Paul Eastham said: "We're interested in finding out how we can change the way light behaves, and how that could be useful. What I think is so exciting about this result is that even this fundamental property of light, that physicists have always thought was fixed, can be changed."

Professor John Donegan said: "My research focuses on nanophotonics, which is the study of the behaviour of light on the nanometer scale. A beam of light is characterised by its colour or wavelength and a less familiar quantity known as angular momentum. Angular momentum measures how much something is rotating. For a beam of light, although travelling in a straight line it can also be rotating around its own axis. So when light from the mirror hits your eye in the morning, every photon twists your eye a little, one way or another."

"Our discovery will have real impacts for the study of light waves in areas such as secure optical communications."

Professor Stefano Sanvito, Director of CRANN, said: "The topic of light has always been one of interest to physicists, while also being documented as one of the areas of physics that is best understood. This discovery is a breakthrough for the world of physics and science alike. I am delighted to once again see CRANN and Physics in Trinity producing fundamental scientific research that challenges our understanding of light."

To make this discovery, the team involved used an effect discovered in the same institution almost 200 years before. In the 1830s, mathematician William Rowan Hamilton and physicist Humphrey Lloyd found that, upon passing through certain crystals, a ray of light became a hollow cylinder. The team used this phenomenon to generate beams of light with a screw-like structure.

Analysing these beams within the theory of quantum mechanics they predicted that the angular momentum of the photon would be half-integer, and devised an experiment to test their prediction.

Theoretical physicists since the 1980s have speculated how quantum mechanics works for particles that are free to move in only two of the three dimensions of space. They discovered that this would enable strange new possibilities, including particles whose quantum numbers were fractions of those expected. This work shows, for the first time, that these speculations can be realised with light.
Posted by arclein at 12:00 AM