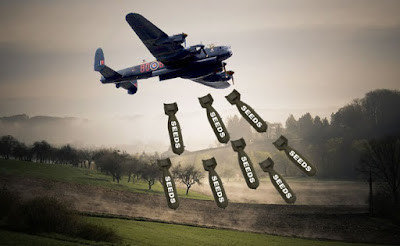 Imagine old military planes used to revitalize barren areas of the earth, instead of causing death and destruction to the environment and wildlife. This reality may be closer than you think. Former RAF pilot, Jack Walters of Shropshire, England, believes C-130 transport aircraft — originally used for carpeting landmines across combat zones — could easily be refitted to deliver something exceptionally beneficial and peaceful: tree bombs.

You may be wondering how something as delicate as a tree sapling could survive the drop. Walters originally had the idea over 25 years ago, but technically it wasn’t feasible — until now.
Tree cones to the rescue

The ideal environment for tree bombs is one that had supported a forest in the past. However, Lockheed says other areas are a possibility as well with just a few minor adjustments — and using shrubs instead of trees.

How does it work?

Using pointed metal cones that rapidly biodegrade, tree bombs bury themselves at the same depth as if they were planted by hand. Each cone contains fertilizer and a special material that absorbs nearby moisture, which provides water to the roots of the tree.

When we look at the numbers, the technology is impressive. A single man can plant approximately 1,000 trees a day, but with aerial reforestation, the number jumps to an astounding 900,000. And retrofitted planes once used for dropping landmines are the perfect choice for a tree bomb mission.
Writes Brian Merchant for TreeHugger:

“It turns out that there are all these military planes just idling in hangars across the world — they were designed to drop landmines en masse in enemy territory, but now they’re just collecting rust. There are some 2,500 of these planes in 70 different countries, and it turns out they make for ideal tree-bombers.”

Similar programs are also available that use a slightly different approach. One example is currently active in Thailand. Another in the UK uses drones instead of airplanes to plant the trees. 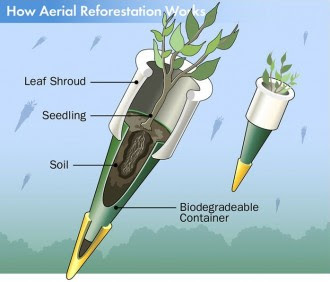 Innovative solutions for a natural world in crisis

Using aerial reforestation, the Thai government has committed to a five-year project that regenerates its forests. But instead of using tree cones, simplified seed bombs are created by mixing soil and local tree seeds, which are then dropped from airplanes over targeted areas.
According to TomoNews US:

“The Royal Thai Air Force loaded the seed bombs into a plane and dropped them over 5,000 rai of a wildlife sanctuary in Phitsanulok province. Seeds from local plants including phayungs, maka mongs and kaboks have been dropped with the aim of regenerating the area and transforming it into a healthy, green forest by 2017.”

In Oxford, England, strides are also being made in the aerial reforestation arena. BioCarbon Engineering has brought drone technology into the forefront of regenerating forests. Founded by ex-NASA engineer Lauren Fletcher, the company has introduced game-changing technology into the realm of ecosystem restoration. Using drones, areas can be mapped beforehand, then tree cones are planted on an industrial scale. Most importantly, the technique utilizes optimum planting technology to increase uptake rates of the trees.

As it stands, over 6.5 billion trees are lost every year because of human activity and natural disasters. During the recent UN Climate Summit, an agreement was made to restore 350 million hectares of damaged and deforested land by 2030. An estimated 300 billion trees would need to be planted to reach this goal. And aerial reforestation technology can make it happen.

Don’t forget, we can always help the ecosystem closer to home and on a smaller scale as well. Have a look at “Seed Bombs: A Creative (and Fun) Mission to Save the Bees and Butterflies” or this inspired seed bomb vending machine from Greenaid. In urban areas, why not try rooftop gardening? And remember there’s always guerrilla gardening too.
Posted by arclein at 12:00 AM